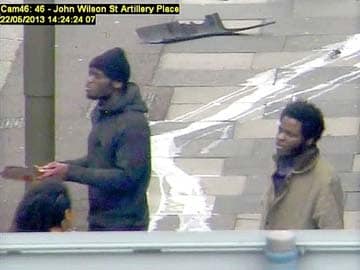 In this photo grab from CCTV, Michael Adebolajo and Michael Adebowale speak to a member of the public near to the Woolwich Barracks in London in May 2013.

London: A man accused of killing a British soldier in a frenzied knife attack on a London street has told a court that he loved Al Qaeda and considers the group's members his brothers.

"I love them. I consider them brothers in Islam," said Michael Adebolajo, 28, speaking calmly as he was cross-examined at London's Central Criminal Court on Monday.

He said he had never met anyone from Al Qaeda.

Adebolajo said he handed a note to a witness at the scene to make sure the public understood his motive for killing Lee Rigby, a 25-year-old soldier who was hit with a car, dragged into the street and repeatedly hacked with knives.

Adebolajo and fellow defendant Michael Adebowale, 22, are charged with murder. The have pleaded not guilty, although in a recording played last week in court the Adebolajo acknowledged killing Rigby in the context of a "war between the Muslims and the British people."

Adebolajo expanded on that theme Monday, saying Rigby's killing was in protest of Britain's foreign policy and its wars abroad.

He said he considered himself a soldier in the service of jihad, and felt an obligation to fight though he found it difficult to leave his family.

Promoted
Listen to the latest songs, only on JioSaavn.com
"I love my wife, I love all my children very much. It's very difficult to leave them. But every soldier has to go through this," he said, his voice faltering.