I have no use for money, says Bill Gates 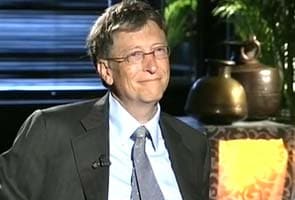 London: William Henry 'Bill' Gates with an estimated wealth of $65 billion is as rich as two Kenyas, three Trinidads and a dozen Montenegros but is now engaged in the process of ridding himself of all the money in the hope of extending the lives of others less fortunate than himself.

Having already given away $28 billion, the 57-year-old Microsoft co-founder now intends to eradicate polio, the Telegraph reported.

"Money has no utility to me beyond a certain point. Its utility is entirely in building an organisation and getting the resources out to the poorest in the world."

Gates owns a lakeside estate in Washington state worth about $150 million. The house has a swimming pool equipped with an underwater music system.

But even at the age of 57, Gates is a restless man and wants something more.

Gates and his wife Melinda have so far given away $28 billion via their charitable foundation, more than $8 billion of it to improve global health.

"We're focused on the help of the poorest in the world, which really drives you into vaccination. You can actually take a disease and get rid of it altogether, like we are doing with polio," Gates told the daily.

"Polio's pretty special because once you get an eradication you no longer have to spend money on it. It's just there as a gift for the rest of time."

The disease is still endemic in Nigeria, Pakistan and Afghanistan.

There is, however, one obstacle. Islamist groups believe polio vaccination was a front for covert sterilisation and other western evils.

"It's not going to stop us succeeding. It does force us to sit down with the Pakistan government to renew their commitments, see what they're going to do in security and make changes to protect the women who are doing God's work and getting out to these children and delivering the vaccine," Gates said.

The Bill and Melinda Gates Foundation will spend $1.8 billion in the next six years to tackle polio.

Promoted
Listen to the latest songs, only on JioSaavn.com
"All you need is over 90 per cent of children to have the vaccine drop three times and the disease stops spreading. The number of cases eventually goes to zero."

"When we started, we had over 400,000 children a year being paralysed and we are now down to under 1,000 cases a year. The great thing about finishing polio is that we'll have resources to get going on malaria and measles," Gates said.