Hurricane Harvey Damage Estimated At $42 Billion, Among Most Costly US Storms

Harvey would be about as damaging as Hurricane Ike, which struck Texas and parts of the Caribbean. 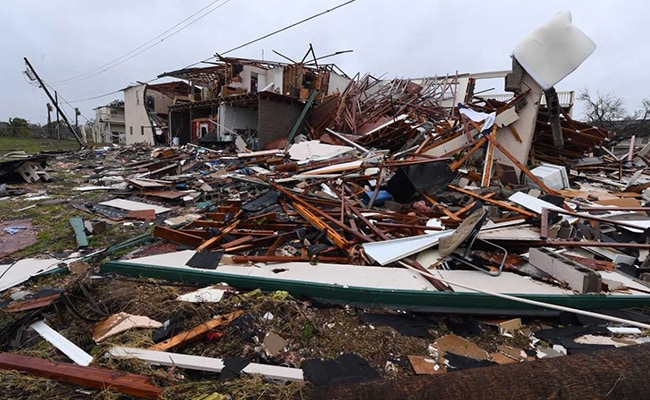 Estimates for damages shoted up overnight to $42 billion from $30 billion. (AFP File Photo)

Washington, United States: Damages from Hurricane Harvey could put it among the top five most costly US storms ever, with failing dams and levees driving up loss forecasts, current data modeling showed Tuesday.

Estimates for total economic costs and damages shot up overnight to $42 billion from $30 billion, as flooding began to spread to Louisiana and flood control measures became overwhelmed, according to Chuck Watson, founder of the disaster modeling firm Enki Research.

While authorities were still focused on rescuing survivors on Tuesday, the question of the storm's aftermath -- and its long-lasting hit to the Texas and US economies -- was only beginning to come into view.

"If Harvey were your normal hurricane it would be probably a $4 billion event," Watson told AFP. "That would be tragic for the people affected, but for the effect on the macroeconomy, we wouldn't be talking about it at all."

But at $42 billion in unrecoverable economic losses, Harvey would be about as damaging as Hurricane Ike, which struck Texas and parts of the Caribbean at a cost of $43 billion in 2008, and Hurricane Wilma, which tore through North America in 2005, with a cost of nearly $38 billion, according to Watson's estimates.

And that figure could still go up.

A US energy hub with $1.6 trillion in annual economic output, Texas accounts for nearly nine percent of America's GDP, the second largest state economy after California -- and larger than Canada or South Korea.

Goldman Sachs estimated Monday that Harvey's disruptions to the energy sector alone could shave as much as 0.2 percentage points off of US GDP growth in the third quarter of this year.

"However, we stress that the overall impact of the hurricane on second-half growth is uncertain," analysts said in a research note.

And despite the losses, they note that "the negative effects are likely to be offset by an increase in business investment and construction activity once the storm has passed."

The Texas Gulf coast, home to nearly a third of the US oil refining capacity, has been ravaged by the most powerful hurricane to hit the state since 1961, shutting down oil rigs and refineries, including ExxonMobil's giant Baytown complex.

And according to Barclays, by early Tuesday about 40 percent of US petrochemical capacity was offline or in the process of shutting down.

Natural disasters like floods and hurricanes can force entire towns into unemployment, interrupt tax collection and disrupt supplies of food and fuel for months, jacking up costs and reducing demand elsewhere.

But, according to the Insurance Information Institute, only 12 percent of homeowners in designated flood areas in the United States were covered by flood insurance in 2016. In the South, the figure rose to 14 percent.

"It's really a devastating situation, not just from a weather perspective, but from a financial perspective for these people," Loretta Worters, a spokesperson for the institute, told AFP.

Those without insurance could be looking at ruin without government assistance, she said.

"It could be total loss for them."

But Watson of Enki Research said the federal maps that designate flood-prone areas -- where homeowners usually are required to obtain flood insurance -- are inaccurate and obsolete, meaning the share of people insured against damage from Harvey will be minimal.

"Our initial estimate is that two-thirds of the flooding happened outside flood zones," he said.

Recovery will be especially difficult for the poorest wage earners, whose income stops the moment they are unable to work.

"They're not on a salary, they're on hourly," Watson said. "They're not getting paid. They've got bills stacked up. Their homes are damaged."

"That's where the real humanitarian disaster is going to happen."