In "Worst Case Scenario" Demo During Storm, A Calm Reporter And A Secret

The Weather Channel said that people are using the surge videos as "a warning tool," one that has resulted in some of the highest engagement on social media. 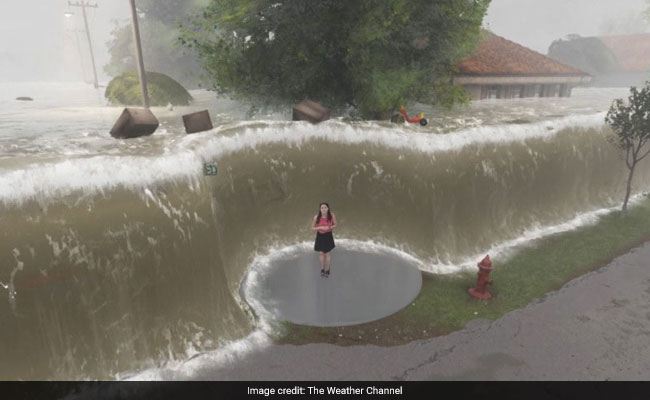 By the time the storm surge nearly reaches the height of a regulation basketball hoop, it no longer resembles ordinary water.

The brackish liquid is more like an ominous, insurmountable wall, one with enough force to lift 3,000-pound cars, flatten neighborhoods and leave a landscape of devastation in its wake.

But meteorologist Erika Navarro - her 5-foot 2-inch frame dwarfed by the liquid barrier behind her - remains inconceivably calm. Her secret: The water is virtual, and Navarro only appears to be on the verge of being swallowed whole.

"Once we get to that nine-foot range, this is an absolute life-threatening scenario," the Weather Channel meteorologist warns. "If you find yourself here, please get out!"

Welcome to the future of meteorological broadcasting.

Known as "immersive mixed reality technology," videos like Navarro's take green screen graphics and merge them with real-time, predictive data from agencies such as the National Hurricane Center. The result is a virtual scenario that unfolds around a studio anchor, engulfing the set with terrifying realism but allowing the anchor to walk viewers through potential weather with newfound urgency.

This week - with storm surging warnings along the North Carolina coast proliferating - the Weather Channel used the tool to show viewers how that surge might affect a typical neighborhood in a "reasonable worst-case scenario."

Michael Potts, the Weather Channel's vice president of design who leads the team creating the channel's new IMR content, said he believes mixed reality is the future of weather presentation. The goal is to engage and entertain viewers, he said, but the underlying message is unmistakably sober.

"This is lifesaving information we're trying to convey, and we wanted to do it in a way that creates a very visceral response in viewers," Potts said, noting that roughly half of all U.S. deaths from tropical cyclones are the result of the storm surge. "We wanted to paint a real picture for people and show that anywhere in America, this could be your neighborhood."

Potts said that people are using the channel's surge videos as "a warning tool," one that has resulted in some of the highest engagement on social media that they've ever seen.

On YouTube, commenters who'd viewed the viral storm surge video said the power of illustrating a hurricane's wrath was undeniable.

"I'd run for the hills if I saw this and I was in the path of this type of flooding and destruction," one viewer wrote.

"Wow, this should be playing on every news site," another wrote. "Incredible computer imaging. If I was trying to decide if I should evacuate or not...this would DEFINITELY tell me to GO!!!"

The Weather Channel debuted its IMR technology in June with a video depicting a hyper-realistic tornado. With sirens blaring in the background, an impromptu science lesson from on-camera meteorologist Jim Cantore turns into a death-defying drama as the storm tosses cars and downs power lines before eventually destroying the Weather Channel studio while Cantore seeks shelter.

"I watched hours of rehearsals and still flinched when the car dropped from the ceiling," Nora Zimmett, senior vice president of content and programming at the company, told The Washington Post in June. "To see the culmination of six months of front-line work appear on screen as an Immersive Mixed Reality experience emphasizes that the Weather Channel is the leader in groundbreaking technology."

The Weather Channel followed up with a segment exploring the dangers of lightning that debuted last month. The virtual graphics - produced using the same suite of tools used by video game developers - are created in a new studio at the channel's Atlanta headquarters.

Potts said the channel is transforming its daily operations of weather presentation. The channel's content creators aim to include IMR technology in 80 percent of its programming by 2020.

As far as television programming is concerned, the weather remains a fairly steady series of reoccurring episodes, he said. But that doesn't mean those who cover it have to be predictable as well.

"Pretty soon this technology will be part of your standard forecast," Potts said. "From our studio in downtown Atlanta, we'll be able to take you all over the world."

(Except for the headline, this story has not been edited by NDTV staff and is published from a syndicated feed.)
Comments
hurricane florenceThe Weather Channel