"Either He's Going To Leave Today Or...": Florence Rain Inundates US Town 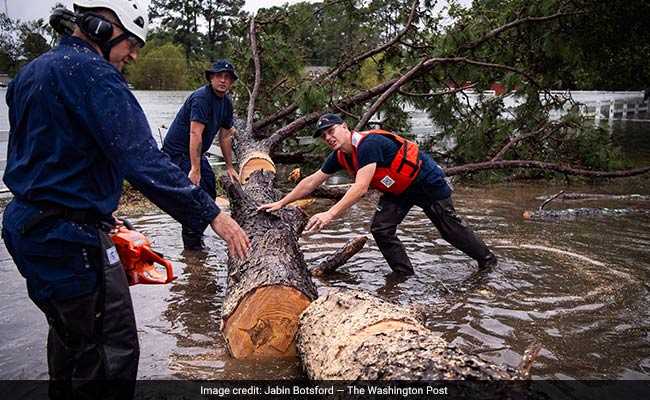 The homes just off Alamac Road that Ryan Abshear visited Sunday, door to door, in the hard rain, are small, either one-story brick or clapboard, some tidy, others in disrepair. It is as varied as Florence's path and punishment.

"U.S. Coast Guard," Abshear, a crew-cut boatswain's mate with a pinch of tobacco in his gums, announced with each knock. "I've been sent to tell you that your neighborhood is in the path of flooding and you must leave."

Groggy and surprised, one man who opened the door thanked Abshear, part of a Coast Guard rescue unit here from Huntington, West Virginia.

But the man would not say whether he would leave his home, even as the nearby Lumber River crested, floodwaters tested protective levees, and thousands of residents across the city faced new inundation threats from Tropical Depression Florence.

"Either he's going to leave today or we'll come and get him tomorrow," said Abshear, 37, who has worked a number of past floods. "They always leave - either way."

At times here the roads filled with cars as if it were an ordinary Sunday in this city of 22,000 people, where the fallout from the economic changes of the past decade are visible in the empty strip malls and the vacancy signs along the historic downtown square. All the while, floodwaters rose, dividing one side of the city from another and shutting Interstate 95 in both directions.

By midafternoon, as rains strengthened again, the streets emptied, power flickered on and off, and water rose and spread through Lumberton's neighborhoods, rich and poor, some evacuated and all still vulnerable. More than 1,300 people are in the town's shelters, and officials wished that number were far higher.

In neighboring Pembroke, Matt Locklear, the town's rescue commander, said his agency had conducted about 120 evacuations and 20 rescues since the storm began, including complex procedures such as pulling people out of submerged cars.

There were no deaths or severe injuries, but a few close calls. On Saturday night, a fire vehicle driving to a rescue in the dark crashed into a canal, Locklear said. There was so much water on the roads, they couldn't tell a puddle from a trench.

"I think they were more wet than anything," Locklear said.

Along Alamac Road, which spans the Lumber River in better times and was awash with it Sunday, the extent of the region's flood damage and the remaining threat was visible in microcosm.

Some neighborhoods were filling with water - like those along Marley Road on Abshear's door-knocking route - and were still populated by recalcitrant residents who refused the mandatory evacuation orders.

On either side of the road, houses appeared as small islands amid the brown, dangerous floodwaters, a front-yard fountain and two pink flamingos appearing just above the surface along one stretch.

The brick sanctuary of the Faith Community Church, whose sign Sunday asked "Give the Gift of Life, Lord, Teach Us to Serve," was swamped. A pair of 10-foot-high basketball hoops at Alamac Community Park measured only seven feet above the water surface.

At another house along Marley Road, Abshear's knock provoked the appearance of a white poodle in the window, barking insistently. But no one answered, underscoring what the main purpose of the in-person warnings were about. 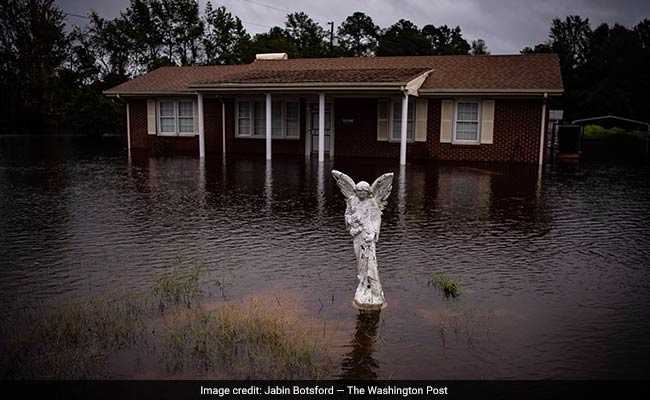 Hurricane Florence: A statue stands in front of a home which was covered in floodwaters in North Carolina

"We're really trying to find out if people who live here aren't ambulatory, they want to get out but just can't," he said. "I mean look at that dog. It's the kind my grandmother would have. But where's the owner? We just don't know."

It was only the people that needed warning - and saving - as Florence continued its creep across the state.

A half-mile up Alamac Road, John Hendren answered the door to the Coast Guard and, visibly distressed, said he had just been planning to walk across his flooded paddock to rescue three horses trapped in a barn.

Hendren is 73, gray-haired and hardy, with a pistol on his hip. But a walk of about a quarter-mile across waist-high water would have tested someone half his age. The Coast Guard unit, led by Chief Boatswain's Mate John Mitchell, said it would help.

"I'm not going to let a 73-year-old man walk out there into who knows what by himself," Mitchell said.

The main problem was a 70-foot pine tree that had fallen across the path from the barn to the road. The tree was two-feet in diameter and the water around it had risen to the knees of the Coast Guardsmen's waders.

Hendren pulled a Stihl chain saw from the back of his Ford F-150 and went to work on the tree, as Command Master Chief John Schmerber, deployed from Boston as part of an engineering unit, joined him with a chain saw of his own.

"It's pinching now, so I'm stuck," Schmerber told Hendren at one point, his saw gripped by two sides of the tree. "Just be careful how far you go."

They worked in tandem for more than 20 minutes, trunk then the thick limbs that had anchored it into the mud.

Finally the trunk collapsed in the middle, and the men cleared the path as Hendren, breathing heavily, set off for the barn and warned the Coast Guardsmen to remain a few steps behind to prevent spooking the horses.

A few minutes later, Hendren appeared with a bridle around Honey, a big Palomino, leading the horse he described as "the alpha male." 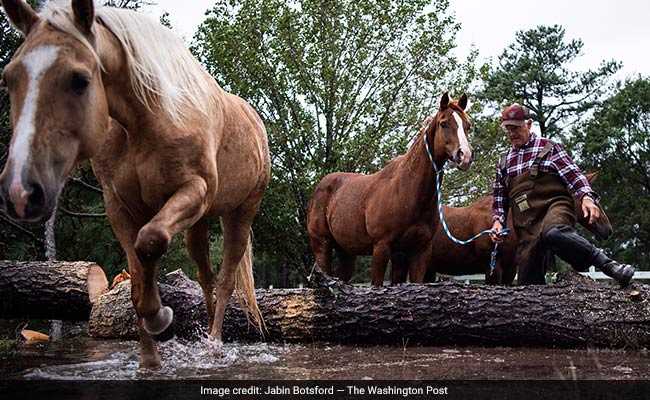 Hurricane Florence: John Hendren leads his horses that were trapped due to floods to safety

"If I can get Honey out, the other two will follow," he said, and sure enough, Babe and Sugar walked alongside, trotting up the path toward Alamac Road after clearing the water.

Hendren quickly formed a makeshift corral for the sprightly, spooked horses, penning them in with the flooded paddock on one side and his Ford pickup on the other.

Then he collapsed, dry heaving with dehydration and stress, next to the driver's side door. Coast Guardsmen gave him water, which he continued to vomit. Others on the team, which had experience saving horses in previous floods, led the three to a dry paddock a quarter-mile down the road.

"Those were seven, eight and nine for me - horses I've been involved in saving," said Petty Officer Second Class Blake Roberts, who grew up on a cattle ranch in Gay, Ga.

The uncertainty of Florence's speed and rainfall made Sunday a confusing one for rescue crews, official and unofficial. The Cajun Navy staged its operation from inside The Wash House Laundromat off Roberts Avenue, filling the parking lots with mud boats, air boats, bass boats and whalers.

One concern that animated the day and influenced deployments was the threat that the city's aged levee system would give way. The Cajun Navy sent teams south of the city, into rural areas that would be affected if the levee burst, early in the day.

But the levee held, although a volunteer-made bank of sandbags assembled in the previous days to protect several west Lumberton neighborhoods sprung a leak. The breach promised to apply more pressure to the levees as the day wore on.

"It's a matter of time before the levee fails as well," said Sebastian Milton, a volunteer with the Cajun Navy who came to Lumberton from Covington, Louisiana, to help with rescue operations. "That's a man-made structure, it can't keep holding back the river."

Milton and fellow volunteers were posted on a bridge overlooking the Lumber River and a flooded section of I-95 Sunday afternoon. Their boats at the ready, they waited in pouring rain for the next emergency call to come in.

"There's still people out there," Milton said, gesturing toward the expanse of dark water and trees that hid flooding homes.

Before heading out on their next rescue Sunday morning, a dozen emergency workers in Pembroke gathered in the fire station and bent their heads in prayer.

"It's going to be hard to see Jesus, any peace, any hope, in what's happening today," said Steven Jacobs, pastor at the Mount Olive Pentecostal Holiness Church.

Outside, the rain was falling, relentlessly, as it had done for the past three days. The Lumber was 12 feet above flood stage, swamping many roads. In the town's north, home to many public housing complexes, the downpour overwhelmed drainage systems and turned backyards into ponds.

A recently evacuated family, rescued from the deluged north side of town, stood by one of the firetrucks wrapped in blankets. The children were barefoot and still in pajamas. A woman in a wheelchair held two small dogs. Her eyes were red.

"Amen," someone called out.

"I'm proud of you," Jacobs said. Then he raised his right hand skyward. "God, I lift my hand in the midst of this terrible time on behalf of these folks."

The rain beat down on the station's roof.