Bahamas National Security Minister Marvin Dames said several children were among the dead in the Atlantic archipelago and "unfortunately, we will see more deaths." 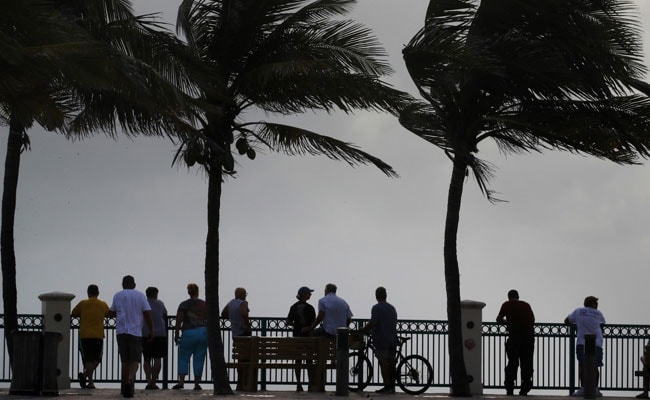 Hurricane Dorian was downgraded from a Category 3 to a Category 2 storm on the five-level wind scale.

Hurricane Dorian weakened slightly as it crawled towards the southeast coast of the United States on Tuesday after leaving at least five people dead and a swathe of destruction in the Bahamas.

Bahamas National Security Minister Marvin Dames said several children were among the dead in the Atlantic archipelago and "unfortunately, we will see more deaths."

"I can't see any way out of it," the Nassau Guardian newspaper quoted Dames as telling reporters.

"This was a crisis of epic proportions," he said. "Maybe the worst that we've experienced, certainly in our lifetime."

Video footage showed catastrophic damage from the powerful hurricane on the islands of Grand Bahama and Great Abaco in the northern Bahamas including shattered homes, fields of debris and flooded streets.

The runways at Grand Bahama International Airport in Freeport, the island's largest city, were under water, complicating rescue efforts.

The US Coast Guard sent MH-60 Jayhawk helicopters to Andros Island in the southern Bahamas to help with search and rescue operations as residents trapped in their homes by floodwaters issued distress calls.

Ken Graham, director of the Miami-based National Hurricane Center (NHC), said Dorian was on the move after being "stationary for more than 24 hours battering the Bahamas."

Dorian, which has dumped as much as 30 inches (76 centimeters) of rain on the Bahamas, was downgraded Tuesday morning from a Category 3 to a Category 2 storm on the five-level wind scale.

But it remained an extremely dangerous hurricane as it crept towards the coast of the southern US states of Florida, Georgia and South and North Carolina.

A state of emergency has been declared up and down the coast for millions of US coastal residents in the path of the monster storm.

Dorian was located about 105 miles east of Fort Pierce, Florida, and moving in a northwesterly direction towards the Florida coast at a snail's pace of two mph, it said.

The hazardous conditions would continue through much of Tuesday on Grand Bahama, which is the northernmost island in the archipelago, the NHC said.

It said Dorian was expected to pick up speed and grow in size during the day and turn towards the north on Wednesday evening.

Yasmin Rigby, a resident of Freeport, the largest city in the Bahamas, told AFP by text message on Tuesday that "most of the island is still flooded" and it was "still raining with gusty winds."

"I am still getting calls from people calling for help," Rigby said. "I cannot move from my apartment. Thankfully we have sufficient supplies."

In Coconut Grove, Florida, which has a sizeable population from the Bahamas, residents were collecting supplies for hurricane victims.

Robinson said seven seaplanes were on standby to deliver the supplies "when the weather permits."

Robinson said some church members have family who were "devastated by the storm."

"Some have lost everything they own," he said. "Their homes, any forms of transportation, businesses. They have absolutely nothing."

Henry Gomez, who was visiting Florida from New York, was among those dropping off supplies. "I feel bad for the Bahamas, what they're going through right now," Gomez said. "We all have to chip in and help."

Florida has started to feel the effects of Dorian, with heavy rain and strong gusts of wind reported.

Florida senator and former governor Rick Scott wrote on Twitter that "a slight wobble West" would bring the storm "on shore with devastating consequences."