Hurricane Dorian Powerful And Unpredictable As It Approaches Florida

Hurricane Dorian has been a bit mercurial, slipping east of Puerto Rico and sparing it yet another assault, and skipping across the Virgin Islands without leaving much damage in its wake. 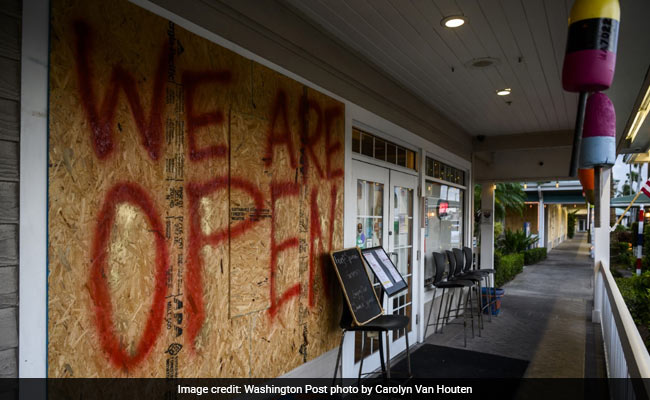 Chowder Heads serves customers as hurricane churns off the coast in the Atlantic Ocean on Saturday.

Hurricane Dorian slammed into the Bahamas with unprecedented force on Sunday, a monstrous Category 5 cyclone that became the strongest storm ever to hit the island chain and the fiercest to traverse the Atlantic Ocean in nearly a century.

With sustained winds of 185 mph when it made landfall - and gusts well above 200 mph - it remained powerful and unpredictable. Forecasts call for Dorian to approach the South Florida coastline early Tuesday morning somewhere near here, but what happens after that is still uncertain. Should the storm make landfall in Florida, it could be catastrophic. Should it veer north and lumber along the coast, it might not make a U.S. landfall at all - but it could still bring extreme storm surge, massive rains and hurricane-force winds to much of the Eastern Seaboard throughout the week.

Dorian has been a bit mercurial, slipping east of Puerto Rico and sparing it yet another assault, and skipping across the Virgin Islands without leaving much damage in its wake. Though at times predicted to make a direct hit on Florida's Space Coast - still a possibility - the storm appears potentially headed for a turn that would put Georgia and the Carolinas at risk.

The wobble that Hurricane Dorian took Saturday, nudging the monster storm in a slightly different direction, seems to have convinced a lot of weather-weary Floridians that they are in the clear, or at worst in for just heavy rains, not a Category 5 behemoth. 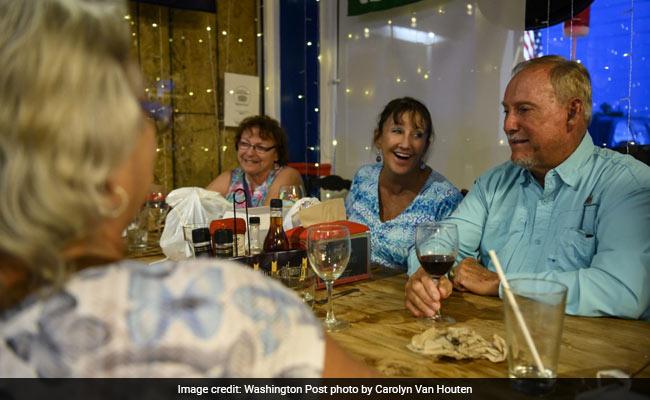 Florida residents have dinner with family members at Chowder Heads in Jupiter, Florida, on Saturday, Aug. 31, 2019. as Hurricane Dorian churns off the coast in the Atlantic Ocean.

"I'm still of that belief it's going to be a bad thunderstorm," said Rebecca Weiss, 56, as she came out of a Publix supermarket Sunday morning in West Palm Beach. She used to live on a sailboat and escaped two hurricanes before 2005, when she bought her house. "I look at that map and . . . a teeny part of me is worried. But my new hurricane windows were just installed Friday afternoon."

Florida Gov. Ron DeSantis, a Republican, urged residents not to be complacent because of the shifting storm track, as he and officials across several states issued pleas for people potentially in Dorian's way to relocate. There is still time, ahead of what has turned out to be a plodding threat.

"This storm, at this magnitude, could really cause massive destruction, and do not put your life in jeopardy when you have a chance to get out," DeSantis said at a midafternoon news conference. "We are in a situation where this thing is perilously close to the state."

While the storm battered the Bahamas on Sunday, South Florida had a hot and sunny Labor Day weekend. But DeSantis warned that the storm's 185 mph winds exceed those of 1992's Hurricane Andrew, which demolished the Miami suburb of Homestead, and last year's Hurricane Michael, which wiped out the small panhandle town of Mexico Beach.

If the current winds continue, DeSantis said, Dorian would rival the Labor Day hurricane of 1935, which destroyed the Florida Keys and is considered the strongest hurricane on record in the United States. Dorian tied its landfall wind speed mark of 185 mph on Sunday in the Bahamas. The unnamed Labor Day storm killed about 500 people, including 259 World War I veterans who were mostly employed as construction workers building the Overseas Highway and living in tented government camps. It also destroyed Henry Flagler's railroad connecting Key West to the Florida mainland. 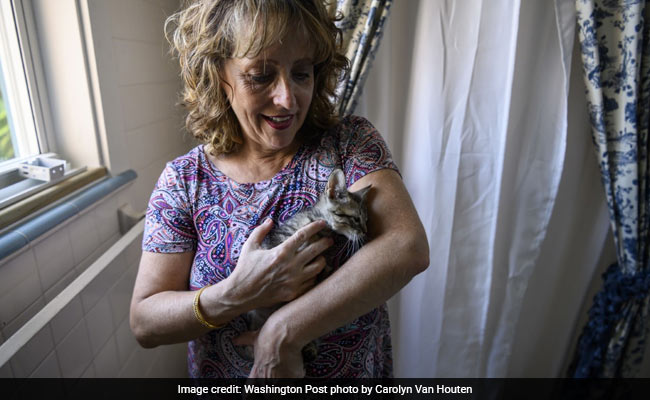 Rebecca Weiss stands for a portrait next to a new hurricane-rated window with a foster kitten named Alfredo, whom she is taking care of during the storm, at her home in West Palm Beach, Florida.

"I think it is foolish to just rely on what is an estimate of a track that is offshore on a storm of this magnitude," he said. "A few miles can make a big difference in wind speeds. . . . If this storm continues on a western track and makes landfall . . . there would be significant destruction. This would not be a restoration of power. We'd have to rebuild part of our system. Concrete poles would be snapped in these kinds of winds. Homes would be destroyed."

FPL's chief meteorologist, Tim Dunn, said he estimates a 50 percent chance that the storm will make landfall in Florida, and if it does, it's likely to land along the coast lines of Martin and St. Lucie counties, known in Florida as the Treasure Coast.

Hurricane and tropical storm watches and warnings stretched along almost the entire east coast of Florida. The National Hurricane Center on Sunday evening issued a hurricane warning from Jupiter to the northern end of Brevard County, on the coast just east of Orlando and south of Daytona Beach.

Evacuations of the barrier islands - including the posh Palm Beach, where President Donald Trump's Mar-a-Lago resort is located - were ordered Sunday, and county-based shelters began opening as well.

In Port Orange - just north of the current warnings, and where a new hurricane watch is in effect - James and Sherita Davis weren't too spooked by Dorian as they fished off a dock. They live inland, and brushed off family entreaties to come north to Virginia or New York to wait out hurricane season.

"It's going to miss us," said Sherita Davis, 48. "But we'll get all the outer bands. The usual Florida. The winds. The rain."

Exhausted by the changes in the slow-moving storm's expected path, as well as two consecutive years in which major hurricanes (Irma in 2017 and Michael last year) devastated different areas of the state, several residents pointed to 2016's Hurricane Matthew, for which they made extensive preparations only to see it stay off the shoreline, weakening as it moved north.

But Trump, after a briefing at the Federal Emergency Management Agency, asked everyone in Dorian's path to pay close attention to the dangerous storm, and to heed all warnings and evacuation orders. He said the federal government's top priorities as Dorian approaches the United States are to provide lifesaving and life-sustaining support to augment state and local efforts.

"We don't even know what's coming at us," Trump said. "All we know is it's possibly the biggest. . . . I am not sure that I've ever even heard of the Category 5, I knew it existed. . . . That's the ultimate, and that's what we have, unfortunately."

With intense storms becoming more the norm - Florida has seen a Category 4 and a Category 5 storm make landfall in the past two years, and are looking at a third - officials stopped short of linking them to climate change.

"You can look through the history of the past 25 years, and there's been more hurricanes, more intense, yes," Gaynor responded. "I think we can look to that at another date. But I think the message for today is, with the new Cat 5, don't take your eye off this storm. Now is the time for preparing yourself and your family for anything that might happen."

It would be difficult to convince the seven cousins and siblings who jammed into Jupiter's Chowder Heads, a New England-style seafood bistro in an all-but-shuttered strip mall Saturday night, that they should leave. They teased and laughed between rounds of wine and beer.

"You look at all the shutters up in our neighborhood - those are the newbies," said Ronald Harris, 76, a native Floridian. "People like me, we waited until the last minute and now I don't have to do anything."

"I got up this morning and looked at the radar and briefings and said 'Oh no!' " the retired engineer said Sunday. "I came to the rational conclusion that I don't want to lose all my junk. I've been forced to clean up my yard, put the hurricane shutters up on my 14-foot front windows, and I have to take back the words I said yesterday because Mother Nature said 'Ron, you pompous little so-and-so.' . . . I'm not fearless, but I'm not stupid, either."

In the Daytona Beach area, relief that had set in among residents as they watched forecasts pushing the storm east gave way to pause as Dorian intensified to Category 5. As the hurricane wreaked havoc in the Bahamas, some local roads in Florida flooded amid a brief morning rainfall - perhaps a taste of things to come.

City police went door-to-door in communities prone to flooding with advice on how to be prepared and a warning that law enforcement officials might not be able to help residents who try to flee after the storm strikes.

"Last year, we had several people trying to get out in the middle of the storm and we weren't able to get here for hours," Sgt. Don Rininger told a woman in the second floor of an apartment building who planned to remain in place.

"We don't know what's going to happen," the officer said, leaving her with a flyer detailing the locations of emergency shelters and tips for what to bring.

Most residents Rininger spoke to planned to stay with relatives or go further inland. A few insisted they would be fine.

Sitting on his Harley-Davidson motorcycle outside an Ace Hardware, Ralph DeJesus lamented how some of his neighbors along the Daytona beachfront insisted Dorian was "going to be nothing." DeJesus, 60, is bracing to stay in his home with his three Great Danes and a tortoise, with a generator, a metal roof and storm windows.

"They are not all just another one. I lived in Miami through Andrew, and the roof of my house came off while I was in it," DeJesus said. "They are nothing to dismiss. . . . Even the smallest hurricane has a potential for danger."

DeJesus said he and neighbors have been at work boarding up windows on their block.

(Except for the headline, this story has not been edited by NDTV staff and is published from a syndicated feed.)
Comments
Hurricane Doriancyclone