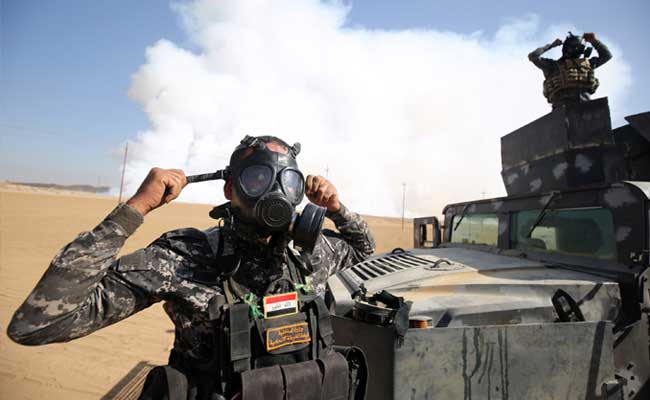 Soldiers have been seen wearing surgical masks about 15 miles south of the fires. (AFP)

Irbil, Iraq: A fire set by Islamic State militants at a sulfur mine near the city of Mosul in recent days sent plumes of noxious gases over the battlefield, sickening hundreds of civilians and forcing Iraqi and U.S. troops to wear protective masks, health and military officials said on Saturday.

Firefighters were still struggling on Saturday to put out the blaze at the Mishraq sulfur mine, about 25 miles southeast of Mosul, according to Col. Abdulrahman Al-Khazali, a spokesman for Iraqi Federal Police who visited the mine.

Officials gave no indication that the fumes had interrupted a broader five-day-old offensive to capture Mosul from the militants.

But the smoldering sulfur added to the list of unconventional weapons - including oil fires, armor-plated car bombs and exploding drones - the militants have deployed in an effort to slow the march of Iraqi forces toward the city.

In another attempt to distract their opponents, dozens of Islamic State fighters staged a bold raid on government buildings and police positions in the northern city of Kirkuk, east of Mosul, on Friday.

The attack was largely contained by Saturday, but at least 80 people, mainly Kurdish security forces, had been killed during the incursion, a Kirkuk police official told the Associated Press.

Soldiers were seen wearing surgical masks about 15 miles south of the fires on Friday, where a highway and surrounding villages were blanketed in a dull gray haze. Several oil fires burned nearby, obscuring the view of the horizon with a curtain of black smoke.

In recent days, shifting winds began blowing the noxious fumes over U.S. troops stationed at a forward staging base near Mosul, according to American officials. 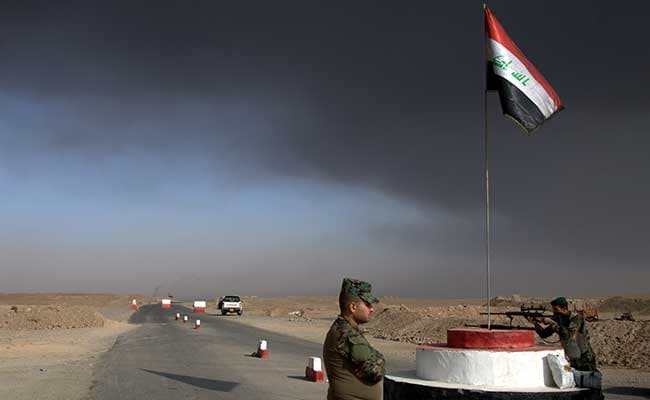 The fires added to concerns that ISIS might use crude chemical weapons. (AP)

Although much of the mine was burned during the 2003 U.S.-led invasion of Iraq, about 10 percent of the sulfur still remains.

The fires added to concerns that the militants might use crude chemical weapons as Iraqi troops close in on Mosul. The Islamic State is believed to have what a senior American official described as a "very rudimentary chemical weapons program" in the city that includes mustard and chlorine gases.

""It can easily go from rudimentary to more sophisticated," said the official, who was granted anonymity to discuss intelligence matters. "We have worked hard to identify it," he said, speaking of the program.

Tens of thousands of Iraqi and Kurdish peshmerga soldiers are involved in the Mosul offensive, which started on Monday following months of operations in the countryside around the city. They have steadily advanced across swaths of desert and into small hamlets as they draw within miles of the city.

Despite the progress, the forces are at least days, if not weeks, from the city itself. The fighting is expected to be heaviest there, where the Islamic State has focused the majority of its defenses, U.S. officials said.

Keeping up the momentum of the operation is seen as critical to maintaining the alliance of disparate forces with often-competing interests that are cooperating, for the moment, to recapture Mosul.

Turkey, which maintains a contingent of roughly 500 troops near Mosul, has insisted on a role in the offensive. Iraqi officials say the Turkish troops, who have been training Sunni forces at a base there since December, are in the country without permission.

On Saturday, Iraqi Prime Minister Haider al-Abadi again rejected the possibility of Turkish involvement in the current campaign - just a day after Defense Secretary Ashton B. Carter announced that he had reached an agreement "in principle" with Turkish officials that would allow Turkey to participate in the battle.

Tensions over Mosul have escalated in recent weeks into an incendiary war of words between Abadi and Turkish President Reccep Tayyip Erdogan. The Obama administration has struggled to mediate between the two countries, both close allies of the United States and seen as playing critical roles in the fight against the Islamic State.

"The Mosul battle is an Iraqi battle, and the ones who are conducting it are Iraqis," Abadi said on Saturday. "We don't have any problems." If help were needed, he added, "we will ask for it from Turkey or from other regional countries."

At a news conference following a meeting with Abadi, Carter insisted that the United States could still play a role in negotiating the impasse.

"We all need to stay focused on the fight against ISIL," Carter said, using another acronym for the Islamic State.