Organisers said about a million people opposed to Britain leaving the European Union joined what they called the "Put it to the People" march. 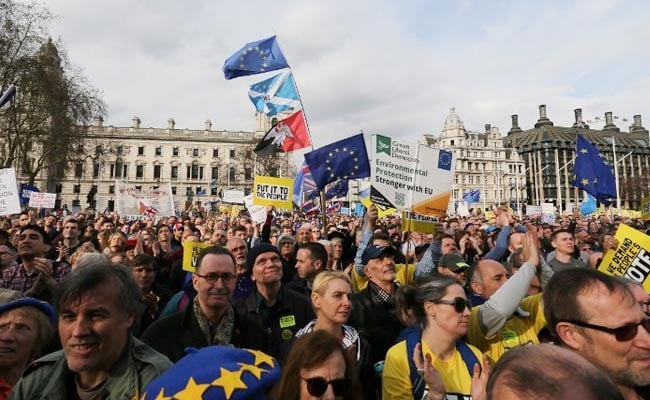 Hundreds of thousands of protesters swamped London on Saturday demanding another referendum on EU membership amid political paralysis over Brexit, in one of the country's biggest protests in decades.

Organisers said about a million people opposed to Britain leaving the European Union joined what they called the "Put it to the People" march, descending on the capital by road and rail from across the country.

Wielding an array of anti-Brexit signs and EU flags, they first gathered at Hyde Park before walking the approximately two-mile route to Westminster -- whistling, cheering and chanting.

"We need to revoke Article 50 and if we can't do that, then we need the people's vote," she said, referring to the EU legal mechanism Britain invoked for Brexit.

At the endpoint of the march outside parliament, speakers including Scotland's First Minister Nicola Sturgeon, London Mayor Sadiq Khan and opposition Labour deputy leader Tom Watson rallied the crowds through the afternoon.

"We've seen how the government has ignored our warnings time and time again," said Khan.

"It's time to say loud and clear: enough is enough."

A host of other political figures also joined the demonstration, including Independent Group MPs who quit Britain's two mainstream parties -- the Conservatives and Labour -- earlier this year in protest at their Brexit policies. 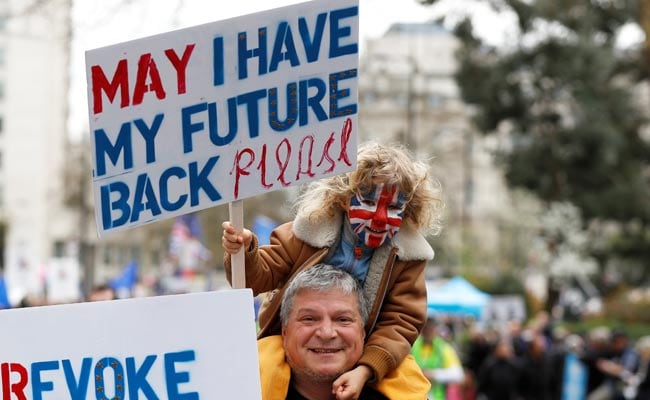 But with the protest coming just days after EU leaders granted a delay to Brexit, people are increasingly hopeful they could still force a public vote.

"The message is clear"

A majority of MPs voted against holding another referendum on the issue earlier this month, and it remains a longshot bid by Remainers.

But with the protest coming just days after EU leaders granted a delay to Brexit, people are increasingly hopeful they could still force a public vote.

"The message is clear: stop Brexit," said the leader of the Liberal Democrats Vince Cable, who led the march as it set off at lunchtime.

"We are now a Remain country. Nearly 90 percent of young voters who weren't allowed to vote in 2016 would vote to remain," he added.

"I was too young to vote in the last referendum," she told the BBC.

"It's going to affect my career with research grants so I definitely wanted to come and protest."

This week's agreed delay to Brexit, which was set for March 29, has prompted Prime Minister Theresa May to make a renewed bid to win MPs' backing for her divorce deal.

If she succeeds, Britain will depart on May 22 under the terms of the withdrawal agreement the prime minister struck with Brussels last year.

But if lawmakers defeat the accord again, as expected, London must outline a new plan or face a no-deal Brexit as early as April 12 -- unless it decides to request another extension and hold European Parliament elections in May. 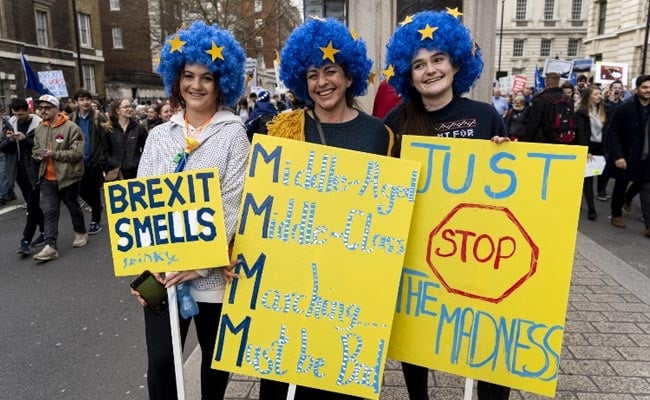 Organisers said about a million people opposed to Britain leaving the European Union joined what they called the "Put it to the People" march, descending on the capital by road and rail from across the country.

Called by the People's Vote pressure group, Saturday's protest follows a similar demonstration in October that drew an estimated half a million people.

Organisers arranged hundreds of coaches and even chartered a train to bring protesters from all corners of the country to the capital.

Stephen Goodall, a 96-year-old World War II veteran, travelled 200 miles (300 kilometres) by train from southwest England alongside four generations of his family including his great-granddaughter.

"I am an old man and the outcome won't affect me -- but it will affect my family and many people that I know for years to come," he said.

May has repeatedly ruled out holding another poll on the issue, claiming it would renege on promises to honour the 2016 referendum result.

Meanwhile the main opposition Labour Party appears divided on the issue, with some MPs in favour while others representing Leave-supporting areas in central and northern England are bitterly opposed.

Watson, the deputy leader, said he had now decided to campaign for a referendum "reluctantly" and would only back May's deal if it was also put to the people.

"It can only begin to bring the country back together again if we all have a final say -- and then live with the result," he said.

"I trust the people I represent. And only they can sort this mess out.

(Except for the headline, this story has not been edited by NDTV staff and is published from a syndicated feed.)
Comments
BrexitLondonBrexit protest