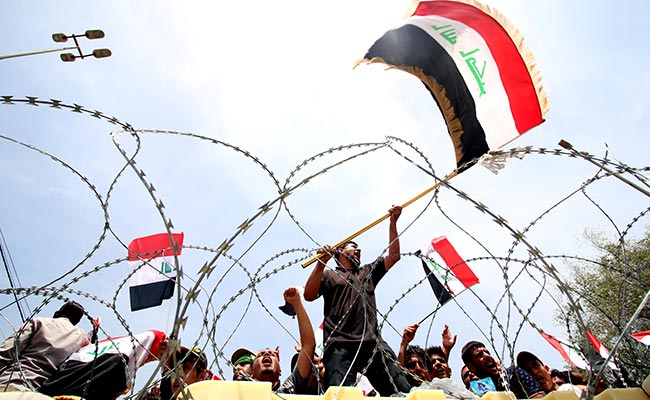 Iraqi supporters of the Sadrist movement shout slogans during a demonstration to press for reforms outside Baghdad's Green Zone. (AFP photo)

The protesters, who had gathered outside the heavily fortified district housing government buildings and many foreign embassies, crossed a bridge over the Tigris River chanting, "The cowards ran away!" in apparent reference to lawmakers leaving parliament, one of the witnesses said.

A guard at a checkpoint said the protesters had not been searched before entering. About ten members of the armed group loyal to Sadr were checking protesters cursorily as government security forces who usually conduct careful searches with bomb-sniffing dogs stood by the side, the witness said.

The protesters wove Iraqi flags and chanted "Peaceful, peaceful!". Some were standing on top of concrete blast walls that form the outer barrier to the Green Zone. Thousands more remained at the gates of the district.

Supporters of Sadr, whose fighters once controlled swathes of Baghdad and helped defend the capital from ISIS, have been demonstrating for weeks at the gates of the Green Zone, responding to their leader's call to pressure the government to reform.

Abadi wants to replace some ministers - chosen to balance Iraq's divisions along party, ethnic and sectarian lines - with technocrats in order to combat corruption; but political parties have resisted the changes. Abadi has warned that any delay to the vote could hamper the war against Islamic State, which controls vast swathes of northern and western Iraq.

Rudaw TV showed protesters chanting and taking selfies inside the parliament chamber where moments earlier lawmakers had been meeting.