The shooting spree on June 12, 2016 by Omar Mateen who pledged allegiance to the ISIS before turning his weapons on revelers also left more than 50 people wounded. 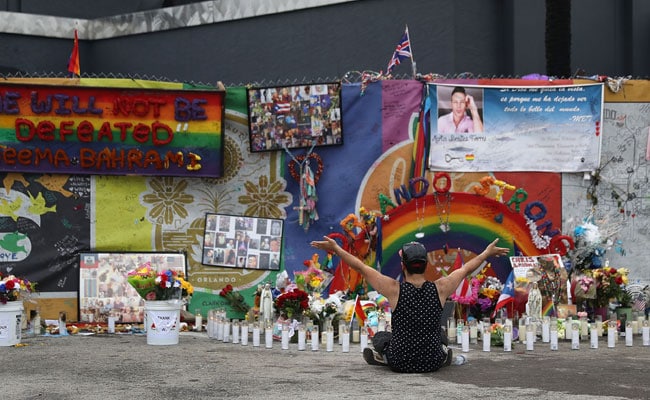 Miami, United States: Hundreds of people gathered at dawn Monday in the Florida resort city of Orlando to pay their respects to the 49 people killed by a gunman one year ago at the Pulse gay nightclub.

The shooting spree on June 12, 2016 by Omar Mateen -- who pledged allegiance to the ISIS before turning his weapons on revelers -- also left more than 50 people wounded.

The building, soon to be converted into a museum, opened its doors at 2:00 am to relatives of the victims and survivors of the attack for a private ceremony attended by city officials in which the names of the dead were read out loud.

"No matter how dark the night, the sun is always going to shine," Orlando Mayor Buddy Dyer told the gathering.

Outside, a makeshift memorial was erected with the rainbow flags of the gay rights movement, pictures of the slain, flowers, candles, soft toys and other offerings.

The massacre was the deadliest mass shooting in modern American history, and the worst US terror attack since September 11, 2001.

"We will NEVER FORGET the victims who lost their lives one year ago today in the horrific #PulseNightClub shooting," President Donald Trump said on Twitter.

The so-called "Angel Force" was formed days after the attack to protect mourners from anti-gay protesters.

"The one silver lining that we can find in all of this, is the amount of love and the amount of care that everybody has for each other," Viviana Torche, one of the people attending the memorial, told local news station WFTV.

At mid-day, a small group of anti-gay protesters came to the scene, carrying a sign with homophobic slurs, but the majority of the crowd wore rainbow-adorned garb to support gay rights.

Christopher Hansen, another person paying his respects, told the Orlando Sentinel that he managed to escape the nightclub but stayed outside to help the wounded on the night of the attack.

"The emotion is too much for words," Hansen said.

"I've come back here several times but this was different. Seeing this mural with the faces of the 49, seeing all these people here to support and remember and honor their lives, it's just so beautiful."

Local authorities declared Monday "Orlando United Day" while Florida Governor Rick Scott said June 12 would be known as "Pulse Remembrance Day," with flags to be flown at half-staff across the state.

Scott visited the scene of the shooting early on Monday and observed a minute of silence.

"This was an attack on Orlando, our state, the Hispanic community and on the LGBTQ community. It left a solemn impact on our state that we will carry with us for the rest of our lives," Scott said on Friday, when announcing the new memorial day.

The majority of the victims of the shooting were Hispanic. A quarter of the 2.3 million inhabitants in the greater Orlando area are Hispanic, and half of those are of Puerto Rican heritage, according to the US census bureau.

Promoted
Listen to the latest songs, only on JioSaavn.com
Orlando, a city of 260,000 in central Florida, is well known as the host of vast Disney and Universal Studios amusement parks and resorts.

Thousands of people were expected to gather on the banks of Lake Eola in the center of the city at 7:00 pm (2300 GMT) for a memorial vigil.