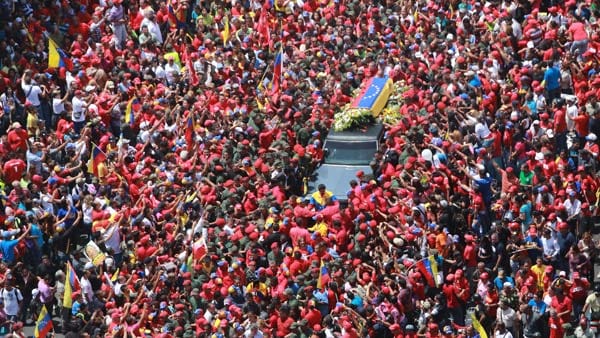 Caracas: Countless Venezuelans filed past the remains of President Hugo Chavez on Thursday, crying, making the sign of the cross and giving military salutes as an era ended and elections loomed in the oil-rich nation.

Chavez lay in state in a half-open casket in the Caracas military academy, with eyes closed behind a glass, wearing olive green military fatigues, a black tie and the iconic red beret that became a symbol of his 14-year socialist rule.

Thousands of people stood in line for hours through the night to get a glimpse of the former paratrooper whose oil-funded socialism earned him friends and foes at home and abroad.

"He's in there, but my comandate is immortal," said Saul Mantano, a 49-year-old salesman with a Chavez hat and a Venezuelan flag. "I didn't want to see him dead, but it's a reality now."

Soldiers and civilians, many clad in red, walked past the casket with just seconds to look at their commander, some pumping their fist to their hearts. They were forbidden from taking pictures.

Chavez lay with a red sash on his stomach with the word "militia" -- the 120-strong armed civilian force that he had formed. A four-man honor guard and four tall candelabras flanked the coffin, with a golden sword at the foot of it.

"Seeing him was very impressive. It brought back all the memories of what we have done together in 14 years thanks to him," said Chanel Arroyo, 34, a driver.

The country gave Chavez a rousing send-off through the streets of Caracas on Wednesday, one day after he lost his battle with cancer at the age of 58, with a sea of people in red shirts throwing flowers on his coffin.

At the front of the procession was his hand-picked successor, Vice President Nicolas Maduro, the interim leader who walked the seven-hour march to the academy and is now on a path to elections in the next 30 days.

His mentor now lies in state in the hall of the academy where he found his political calling, inspiring the former colonel to lead a failed coup in 1992 before being elected in 1998.

"Maduro is already our president. It's what Chavez wanted and we will vote for him when elections come," said one mourner, Margarita Martinez, 37.

The doors opened to the public after a ceremony late Wednesday with his tearful mother, three daughters and son, and a group of aides as well as the presidents of Argentina, Bolivia and Uruguay, all close allies.

The crowd applauded and then chanted "Chavez lives, the struggle goes on!"

"His face was beautiful. We will remember him the way he was, the way he lived," Yelitze Santaella, governor of Monagas state, told AFP after seeing the body, which will lie in the academy until a state funeral on Friday.

Chavez's death on Tuesday was a blow to his supporters and to the alliance of left-wing Latin American powers he led, and it has plunged his OPEC member nation into uncertainty.

Maduro, 50, has now taken the mantle of Chavismo, an ideology that poured the nation's oil riches into social programs, and will likely face off in elections against opposition leader Henrique Capriles, who lost to Chavez in the October presidential election.

Under Chavez, Venezuela's oil wealth has underwritten the Castro brothers' communist rule in Cuba, and he repeatedly courted confrontation with Washington by cozying up to anti-Western governments in Russia, Syria and Iran.

His death brought hundreds of thousands of supporters to the streets of Caracas, throwing flowers on his casket and shouting "I love you Chavez!" for the man whose revolution delighted the poor and infuriated the wealthy.

But in a country divided by Chavez's populist style, not everyone agreed on his legacy, with opposition supporters in better-off neighborhoods still angry.

"Hate and division was the only thing that he spread," 28-year-old computer programmer Jose Mendoza told AFP in an eastern Caracas opposition bastion. "They want to make him a martyr. It made me laugh."

Russia, China and Iran hailed Chavez -- who had cultivated close ties with foes of the West as a way of thumbing his nose at Washington -- as a great leader.

A senior US official said the United States -- denounced by Chavez as "the empire" -- hopes to forge a "positive relationship" with Venezuela once the upheaval of Chavez's death is over.

Promoted
Listen to the latest songs, only on JioSaavn.com
Maduro has picked up on Chavez's anti-US rhetoric, expelling two US military attaches after earlier accusing Venezuela's enemies of somehow causing the president's cancer.