The Hubble Telescope has beamed back a stunning image of a massive galaxy cluster located six billion light years away, which shows extremely faint features that have never been seen before. 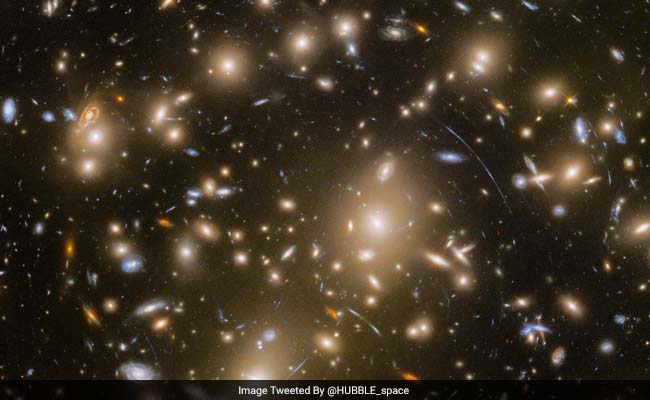 Abell 370, located in constellation Cetus (the Sea Monster), is made up of hundreds of galaxies.

Washington: The Hubble Telescope has beamed back a stunning image of a massive galaxy cluster located six billion light years away, which shows extremely faint features that have never been seen before.

Abell 370, located in the constellation Cetus (the Sea Monster), is made up of hundreds of galaxies.

In the mid-1980s high-resolution images of the cluster showed that the giant luminous arc in the lower left of the image was not a curious structure within the cluster, but rather an astrophysical phenomenon - the gravitationally lensed image of a galaxy twice as far away as the cluster itself.

The Hubble telescope, jointly operated by NASA and European Space Agency (ESA), helped show that this arc is composed of two distorted images of an ordinary spiral galaxy that just happens to lie behind the cluster.

Abell 370's enormous gravitational influence warps the shape of spacetime around it, causing the light of background galaxies to spread out along multiple paths and appear both distorted and magnified.

The effect can be seen as a series of streaks and arcs curving around the centre of the image.

Massive galaxy clusters can therefore act like natural telescopes, giving astronomers a close-up view of the very distant galaxies behind the cluster - a glimpse of the universe in its infancy, only a few hundred million years after the Big Bang.

The new image of Abell 370 was captured as part of the Frontier Fields programme, which used a whopping 630 hours of Hubble observing time, over 560 orbits of the Earth.

Six clusters of galaxies were imaged in exquisite detail, including Abell 370 which was the very last one to be finished.

An earlier image of this object - using less observation time and therefore not recording such faint detail - was published in 2009.

The Frontier Fields programme produced the deepest observations ever made of galaxy clusters and the magnified galaxies behind them.

These observations are helping astronomers understand how stars and galaxies emerged out of the dark ages of the universe, when space was dark, opaque, and filled with hydrogen.

Studying massive galaxy clusters like Abell 370 also helps with measuring the distribution of normal matter and dark matter within such clusters.