Trump, began with less formal comments about his European trip, later made a show of demonstrating to TV audience that he was reading from a script. 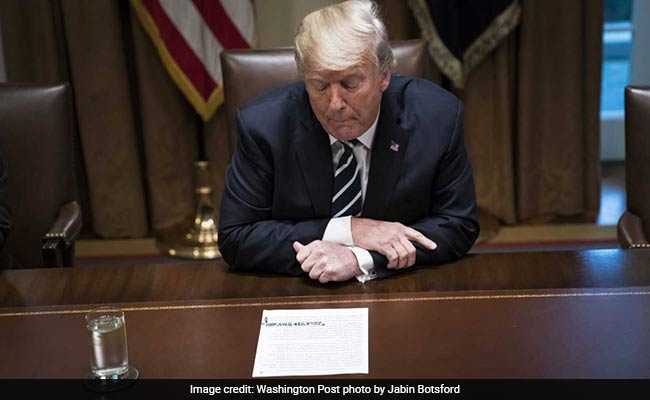 President Donald Trump meets with members of Congress in the Cabinet Room of the White House.

As a young man on the make in Manhattan, as a political candidate and as president, Donald Trump has relied for half a century on a basic rule of behavior: To win, one must never apologize.

But sometimes life offers no choice but to back down, and when that happens to Trump, he has crafted a method of apology that is equal parts retreat and doubling down.

On Tuesday, President Trump felt compelled to pull back on his statement in Helsinki Monday that embraced Russian President Vladimir Putin's version of the 2016 campaign interference story over the facts presented by U.S. intelligence services.

Trump saw that he had to respond to a torrent of criticism from his political base as well as from the opposition. But the way the president delivered his statement of retreat was classic Trump, a dual message - a ritual statement of confidence in U.S. intelligence officials for those who insist that the president respect the nation's systems and mores, but also a series of winks and nods to those who like Trump expressly because he's eager to smash china and topple tradition.

As he began to read his statement reversing what he'd said in Helsinki, Trump, who started his appearance with less formal comments about his European trip, made a show of demonstrating to the TV audience that he was now reading from a script.

Although he'd been speaking for several minutes, he abruptly changed to a more formal tone of voice, and said "So I'll begin by stating that I have full faith and support for America's great intelligence agencies."

He read from the paper: "Let me be totally clear in saying that - and I've said this many times, I accept our intelligence community's conclusion that Russia's meddling in the 2016 election took place."

Then he looked up. Change of tone, to the casual Trump, the voice his followers know conveys his true feelings. And he interjected: "Could be other people also. A lot of people out there."

And he was off, riffing as he had in Helsinki, once more re-litigating the 2016 election, asserting that "There was no collusion at all, and people have seen that and they've seen it strongly."

He would come back to his script, claiming that his error in Helsinki had been the misstating of a single word - "would" instead of "wouldn't."

"So you can put that in," the president said, "and I think that probably clarifies things pretty good by itself."

He went on, but the signals had been sent, a quick wave of a white flag for those who insist on such things, and a zesty little aside, a wink and a nod, to those who needed assurance that their renegade president would never cave to the swampdwellers, never back away from his commitment to blow up the old, failed ways of Washington.

Trump's unscripted aside - "could be other people also" - and what appeared to be the president's own handwritten addition on his script - "There was no collusion" - were reminiscent of other such winks that he has inserted into apologies to remind his followers that he will never be the kind of politician who is managed by staffers.

Although he often demands apologies, Trump has always been frank about his belief that they are a sign of weakness.

He didn't apologize for calling Haiti and African countries "shitholes." He didn't apologize for slamming Sen. John McCain, R-Ariz., during the 2016 campaign as a "loser" who was no war hero "because he was captured." Trump held a news conference to react to the firestorm over his insult. But rather than expressing remorse, he instead hit McCain again, accusing the senator of not doing enough to help his fellow veterans.

"I think apologizing's a great thing," he said on NBC's Tonight Show in 2015, "but you have to be wrong. I will absolutely apologize, sometime in the hopefully distant future, if I'm ever wrong."

Trump came to his style of operating through two primary mentors - his father, Fred Trump, a New York real estate developer known for his stubborn and relentless drive, and Roy Cohn, a legendary New York lawyer who prided himself on his pugnacious refusal to back down.

Always hit back harder than you were hit, Cohn counseled.

To that advice, Trump added his own penchant for showmanship - a trait he says he inherited from his mother. When he has had little choice but to back away from an offending remark or behavior, he often finds a way to make clear to his audience that the apology is an empty ritual, a formal obligation, and that what he really believes is what he said the first time around.

One of Trump's most popular shticks at his rallies is his theatrical discarding of his prepared text. He has tossed pages into the air, held his script up for the crowd's ridicule, rolled his eyes, smirked and shaken his head - all manner of signals to his audience that they should believe what he says off the cuff, not what he's been required to say.

Once he entered politics, apologies took on an added charge, and a highly negative one because Trump believed that Barack Obama had weakened the country's reputation by apologizing too much for U.S. policies.

In politics or in business, Trump believes, as he wrote in several of his best-selling books, that repetition of a false or exaggerated statement is a powerful tool - hardly an occasion for apology.

After years of pushing the false notion that Obama was born in another country, Trump decided to announce, less than two months before the 2016 election, that "President Obama was born in the United States. Now, we want to get back to making American strong and great again."

Far from apologizing, Trump turned the tables on his opponent, claiming incorrectly that "Hillary Clinton started the birther controversy. I finished it."

As a candidate, Trump also resisted apologizing to then-Fox News anchor Megyn Kelly for retweeting a description of her as a "bimbo."

When Kelly confronted him about it, Trump backed down in mock horror: "Ooh, ok, excuse me," he said, later saying "Not the most horrible. Over your life, you've been called a lot worse."

The pattern has been evident throughout Trump's career. Insult, grudging apology, clear signal that he might actually believe what he'd said the first time. Repeat.

In the final weeks of the 2016 campaign, when The Washington Post reported that Trump had been caught on video for the Access Hollywood TV show boasting about grabbing women by the genitals, the candidate himself proposed to respond by apologizing.

But his first statement responding to The Post's report illustrated how Trump apologies often consist of a retreat immediately married to a reassertion of the offending behavior: "Bill Clinton has said far worse to me on the golf course - not even close," Trump said. "I apologize if anyone was offended."

Later that night, in a televised statement, Trump's apology was more fulsome - "I said it, I was wrong, and I apologize" - but so was his doubling down: "There's a big difference between the words and actions of other people. Bill Clinton has actually abused people and Hillary has bullied, attacked, shamed and intimidated his victims."

Last year, after white nationalist demonstrators marched through Charlottesville, Virginia, chanting anti-Semitic slogans and then attacked counterprotesters, Trump spoke at his New Jersey golf resort and managed in one sentence to speak strongly against hateful violence and to send a signal that even a racist attack was not necessarily morally clear: "We condemn in the strongest possible terms this egregious display of hatred, bigotry and violence on many sides, on many sides."

Then, to calm the fires generated by that statement, he returned two days later and repeated the sentence, but without the bit about "many sides."

He wasn't done: The next day, at a news conference, Trump doubled down: "I think there is blame on both sides. What about the alt-left that came charging at, as you say, the alt-right, do they have any semblance of guilt? . . . I think they do . . . Nobody wants to say it, but I will say it right now."