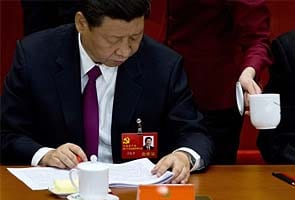 Beijing: China's communist elite are meeting to install a new generation of leaders in a process that is part public show and part backroom politicking.

At the centre of the spectacle is the Communist Party congress, a gathering held once every five years that is the 18th such event in the party's history. The congress is more interlude than climax. Important decisions are made by current and retired leaders, some of whom are not even on the congress delegates' roster, in bargaining that began years ago and has largely been already resolved.

Here's a look at how it works:

Selecting delegates to the congress began months ago, with recommendations made by the party's 82 million members, which are then vetted, winnowed and voted on twice. In practice, the selection is controlled by the party's personnel division, giving the leadership room to make sure the powerful and their key prot&#233;g&#233;s are included. President Hu Jintao, who will retire as party general secretary, is a delegate from Jiangsu province, where he grew up but has not lived for four decades. Most of the 2,268 delegates are chosen to show that the congress is broadly representative. Only the opinions of a small subset matter. One power-broker, retired President Jiang Zemin, is a specially invited delegate, a sign of his continuing influence in the leadership bargaining.

Held over seven days, the congress selects the Central Committee, the party's policy-setting body. The most recent committee had 370 people, comprised of full members and non-voting alternates drawn from the upper echelons of the party, government and military. The congress also names the party's internal watchdog agency. Though the powerful hold sway in determining the outcome, there is room for dissent on the margins. Candidates outnumber seats by a tiny percentage. Vice President Xi Jinping, who is expected to replace Hu as party chief, barely made it into the committee in 1997 in what was seen as a vote against nepotism. His father was a patriarch of the revolution. This time rank-and-file delegates have been told to "maintain unity" with the leadership.

After the congress ends, the Central Committee meets to select a Politburo, roughly 25 members, and from that group, the Politburo Standing Committee, the apex of power. The current standing committee has nine members, though party-connected academics say that may be whittled to seven this time. Two members are considered shoo-ins: Xi and Vice Premier Li Keqiang, who is expected to be named premier. The Central Committee also appoints the party commission that oversees the military. A critical question is whether Hu will stay as military commission head. His predecessor, Jiang, did so, hanging on for more than two years and casting a shadow over Hu's efforts to consolidate power.

Choosing the new leaders involves fractious bargaining that attempts to balance out factions and interest groups in the party. Two of the presumed next leaders, Xi and Li, were anointed five years ago, inducted into Hu's leadership to provide continuity. Xi is seen as ex-president Jiang's man; Li as Hu's. Deciding the rest of the lineup has seen unexpectedly sharp-elbowed jostling this year. Bo Xilai, a populist politician seen as a rising star, was cashiered after an aide disclosed that his wife murdered a British businessman. He awaits prosecution, and deciding his fate divided the leadership. A Hu ally was also sidelined after his son died in a Ferrari crash, weakening Hu. How weak will be apparent by counting his allies in the new leadership.

China, like most communist governments, has a history of violent, unpredictable leadership successions. One of revolutionary leader Mao Zedong's named successors died in an alleged failed coup. Party leaders have instituted informal age and term limits to smooth out power transfers. Party chiefs are limited to two five-year terms, while senior leaders 68 years or older at the time of a congress are considered too old to serve in a new leadership. Jiang's stepping aside for Hu in 2002 was the first orderly succession since the party came to power in 1949.