How Donald Trump Reacted When His Teleprompters Broke Down 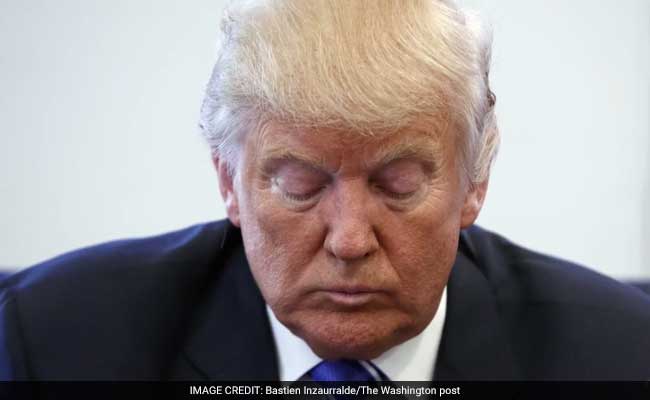 CHARLOTTE: For months, the teleprompters Donald Trump uses at campaign rallies have been a symbol of efforts to keep him "on message" - a sharp departure from the wild, freewheeling speeches that defined his candidacy during the GOP primary, but an acknowledgment of the difficult task of winning a general election.

On Friday, the Republican presidential nominee's teleprompters broke down mid-rally.

"By the way," he announced abruptly about 20 minutes into his speech, "these teleprompters haven't been working for the last 20 minutes. And I actually like my speech better without teleprompters."

It was a ready-made metaphor for the disorder afflicting his campaign, amid a weeks-long string of controversies that include several allegations of sexual misconduct and assault. Even as his advisers continue deliberating on how to respond, Trump has appeared resistant to much of their advice. He has instead signaled that he will move forward in the same way he ran his primary campaign: Without their script, following his own instincts.

The scene here in Charlotte took a turn toward the literal on Friday night. Frustrated, Trump physically dismantled one of the teleprompters. Then he knocked the other one down.

He shared his thoughts on the matter: "You know, it's very funny. I went through 17 professional politicians, top people, and I went without any teleprompters. Then all of a sudden, they said, 'Well now you're running the election, you need teleprompters.' And I like tele - they're fine, but it's sort of cooler without it, right? Don't you think? I like it better without it. And it's a little strange when you see this place. I watch Hillary, she's got the biggest pieces of glass. And sometimes they're painted black on the other side, because you see better. And she always just reads off the teleprompter and it's short and then she goes home and she goes to sleep," he said.

When Trump's speech began here in Charlotte, he was focused heavily on the leaked WikiLeaks emails that have embarrassed Hillary Clinton's campaign. The emphasis on Clinton seemed like a deliberate departure from an earlier event in Greensboro, North Carolina, where he spent a large amount of time denying allegations of sexual assault and drew damaging headlines when he mocked the physical appearances of two women who had accused him.

Then, somewhere along the way, the prompters appear to have cut out.

The ensuing speech was difficult to follow. Trump moved between various topics without dwelling on any single one for an extended period of time. He talked rapidly about defense spending, creating jobs, the Iran nuclear deal and then his vanquished GOP rivals. At one point, he began to wonder aloud who pays for President Barack Obama's use of Air Force One when the president campaigns for Clinton.

To top it all off, the speakers on one side of the room then went out.

He added: "Who the hell runs this place?"

The campaign needed a disciplined day on message. His campaign manager, Kellyanne Conway, joked on Twitter after the speech in Greensboro that she was one of the supporters in the back of the event who kept shouting, "Stay on the issues!" At one point in Charlotte, Conway appeared in the press filing area and spoke to reporters: "He's always on message, don't you think?"

Trump appeared ready to wrap up several times, only to find himself taking on another sweeping range of topics. At one point, within a single five-minute frame he discussed:

- The fight in Mosul

- Hillary Clinton's use of the debate stage, and the accusations that he invaded her space

- His accusation that Clinton invaded his space

The crowd, regardless of the teleprompters or the microphone or the speech, cheered enthusiastically as he joked with them. And they agreed when he asked if they were having a good time.