Government leaders resolutely declined to comment and even the Bhutanese media largely refrained from covering the stand-off, which began in mid-June when Indian troops crossed into a remote plateau claimed by Bhutan and confronted Chinese soldiers prepping to build a road there. 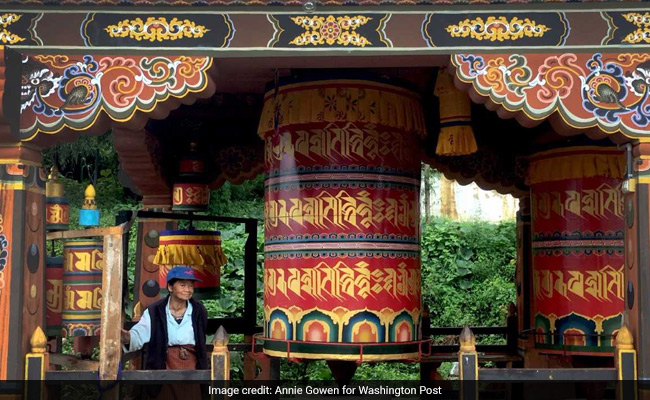 Thimpu, Bhutan: During the long weeks soldiers from two of the world's largest armies camped on their doorstep, officials in the tiny Buddhist kingdom of Bhutan maintained a meditative silence.

Government leaders resolutely declined to comment and even the Bhutanese media largely refrained from covering the stand-off, which began in mid-June when Indian troops crossed into a remote plateau claimed by Bhutan and confronted Chinese soldiers prepping to build a road there.

When the respective armies began withdrawing from the Doklam area Monday, the Himalayan nation of just under 800,000 finally exhaled, and analysts said that its temperance had helped defuse tension between the two nuclear-armed powers.

For years, Bhutan -- a landlocked nation squeezed between the Tibet plateau to its north and India to its east, south and west -- has trod a delicate balancing act between China and its great patron, India, which trains its soldiers, buys its hydroelectric power and is now giving it $578 million a year in aid.

In the country's capital of Thimphu, India's influence can be seen everywhere -- from the army officers jogging on its streets to the laborers on Indian projects for mountain roads.

"Bhutan is really caught between two sides and the confrontation at Doklam has brought everything to the surface," said Nirupama Menon Rao, India's former foreign secretary and ambassador to China. "Bhutan has played this game of survival for a long, long time. Nobody does it better than them."

But the dispute caused many in Bhutan to call for the country to re-evaluate its close -- some say suffocating -- relationship with its southern neighbor.

"If India's border closed tomorrow we would run out of rice and a lot of other essentials in a few days, that is how vulnerable we are," said Needrup Zangpo, the executive director of the Journalists' Association of Bhutan. "Many Bhutanese resent this."

The country -- with stunning mountain passes, rippling Buddhist prayer flags and ancient temples -- was until recently a monarchy, its villages isolated from much of the world for most of the last century. Television arrived only in 1999, and even now only about 60,000 tourists from outside the region visit each year, paying a hefty $250-a-day visa fee in high season.

Its beloved and progressive fourth king, Jigme Singye Wangchuk, set the country on the path to democracy in 2008 and popularized the "Gross National Happiness" indicator, which rates quality of life, preservation of culture and environmental protection over economic output. In a 2015 study more than 90 percent of residents said they experienced some level of happiness.

Bhutan's long ties with India, by far its largest trading partner, were cemented in 1958, when India's first prime minister, Jawaharlal Nehru, traveled through the mountains on a yak. The two countries had already agreed, in a 1949 treaty, that India would guide its foreign policy; the terms were softened and modified in 2007.

Bhutan has an ongoing border dispute and no official diplomatic ties with China, and India has frowned upon any change in this status quo. India cut off a cooking gas subsidy in 2013 because, some analysts charge, it feared Bhutan's then-government was growing closer to its northern neighbor. India has long seen Bhutan as an important ally against Chinese expansionism in the region.

Thimphu is a still-quiet valley town, dotted with traditionally painted homes and apartments, that has modernized rapidly in the last 10 years, and recently began having traffic jams.

Many of its younger, educated residents -- who followed the China-India conflict on their mobile phones, via social media -- said that the weeks-long standoff had raised questions about Bhutan's place in the world, and if the country was being well-served by maintaining such a close relationship with India while holding China at arm's length.

Many of the tenants of Thimphu TechPark, a government owned business park opened in 2011 as a symbol of the country's aspirations, took a pragmatic view of China -- seeing it as a potential marketplace for fledgling Bhutanese entrepreneurs. Bhutan has long looked inward, they said, and now needs to start looking outward.

"I think because we are in a global community now, we should have good relations with both China and India," said Jigme Tenzin, the young chief executive of Housing.bt, an online real estate portal. Unlike some of his peers, he cheerfully wears his gho, the robe-like garment that is the country's national dress, including to international conferences, saying it helps set him apart from other Asian entrepreneurs.

The TechPark itself opened in 2011, and initially did not do well. But today, it has more than 700 Bhutanese employees, offices for several foreign companies and an incubation center for start-ups. One of the companies is trying to create a children's cartoon in Bhutan's national language, Dzongkha, to compete with the Hindi cartoons broadcast from India.

Launching a real estate startup in a country where only about 37 percent of people are on the Internet has been a challenge, Jigme Tenzin says, as the needs of millennial generation apartment seekers don't always match up with the offerings of older property owners, most of whom are still not online. He and his small band of employees ended up having to go door to door with brochures trying to educate people.

(Except for the headline, this story has not been edited by NDTV staff and is published from a syndicated feed.)
Comments
Bhutan Chinabhutan india relationshipDoklam crisis