How Are Donald And Melania? Why America Cares About Their Marriage

As images of her husband's alleged mistresses flick across cable-news screens, Melania Trump has continued to perform her role. 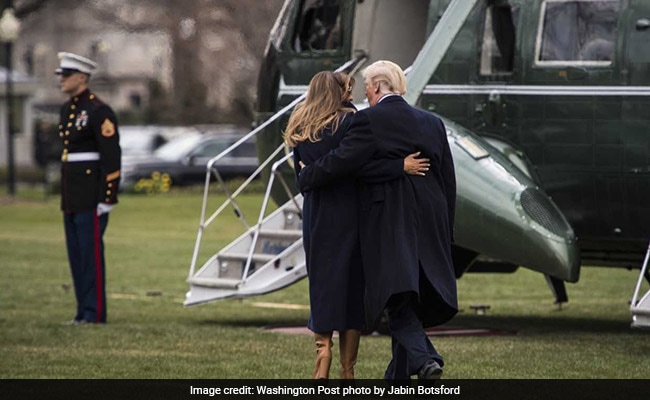 On Monday, onlookers divined outsize meaning from a small gesture by President Donald Trump toward his wife.

As he walked with Melania Trump across the White House lawn to the awaiting Marine One helicopter, he placed his arm around her waist - then held her closer as she stumbled slightly, the heel of her designer boot apparently caught in the grass.

The British tabloid the Mirror homed in on the Trumps' interaction in a story headlined "Donald Trump's reaction to Melania's stumble 'may reveal true feelings,' " and the Twittering class shared their thoughts on his save.

In the meantime, the public has turned the Trumps' marriage into Kabuki by way of YouTube, a union that others try to understand by interpreting pantomimes of their public appearances. They have both said little about their marriage in recent months, so small gestures such as a half-embrace are deciphered, one tweet at a time. Asking "How is the Trump marriage" isn't just a matter of idle gossip, said Katherine Jellison, an Ohio University history professor. Americans have always cared about the state of our presidents' unions.

"There's the concern that, for people in public life, their personal life matters and can affect their decision-making - so they want to know what that connection is, and they want to read the tea leaves," Jellison said. "Many first families have had marriages that people suspected might not be the greatest, and so there's often been speculation."

Many people knew that Eleanor and Franklin Roosevelt lived largely separate lives, and criticism of Eleanor for not being an adequate housewife spilled into editorial cartoons mocking their marriage. The Kennedys, of course, were famously whispered about - although there was a tacit "gentleman's agreement" among male reporters covering the president that his affairs were off limits, Jellison said.

In the 1990s, the Clintons' marriage, which weathered his high-profile affair with a White House staffer, was the subject of tabloid headlines and multiple books.

The collective curiosity about the inner workings of first couples is increasingly fed by a generally more "invasive" media coverage, said Anita McBride, who served as an adviser to George W. Bush and chief of staff to first lady Laura Bush.

"We are fascinated by first families and the behind-the-scenes life of public figures," said McBride, who is an executive-in-residence at the School of Public Affairs at American University. "What's different about it (is) ... greater media access and so many different platforms has led to more robust knowledge about a first family."

Long gone are the days when Eleanor Roosevelt could select the photos of her family that she wanted released to the newspapers, McBride added. Melania Trump can carefully curate her Instagram feed, but she can't control tabloid headlines or hashtags about her, such as the #FreeMelania campaign that her husband's critics often fire up on social media.

"First ladies," McBride added, "are often validators of their husbands."

And in the Trump White House, where the president's mood is watched closely, friends predicted that Melania Trump would be a positive influence. She had been described as a rare soft voice among the shouting that surrounds her husband.

"She provides great balance" to Trump, campaign adviser Roger Stone said in 2015, when the prospective first lady was being introduced to voters.

That narrative has continued throughout Trump's tumultuous tenure. "I do think Donald listens to his wife and respects her opinions on things tremendously," his friend and Newsmax CEO Chris Ruddy told Politico in June, when Melania Trump moved into the White House.

In the nine months she's lived in the White House, she has revealed flashes of independence amid the news reports of her husband's alleged infidelities. On Tuesday, during a meeting she convened of tech and social media company executives to discuss cyberbullying, an issue she has said she wants to address, she seemed to be setting her own agenda.

"I am well aware that people are skeptical of me discussing this topic," she said, in a rhetorical shoulder-brush to those who say her husband's harsh tweets complicate her message on the issue."I have been criticized for my commitment to tackling this issue, and I know that will continue. But it will not stop me from doing what I know is right. I am here with one goal: helping children and our next generation."

McBride said that moment, amid all the scandalous headlines and criticism of her husband, was a defining one for a first lady who has sometimes been accused of playing a smaller role in public life than previous first ladies have.

"She's just been business as usual - she's saying 'these are things I care about, and I'm moving ahead no matter what.'" McBride said. "She's serious about her efforts. Is it a different model than what we've seen? Sure, but each (first lady) defines the role for themselves."

As images of her husband's alleged mistresses flick across cable-news screens, Melania Trump has continued to perform her role. Monday, she introduced the president at a gathering about the opioid crisis in New Hampshire. Tuesday, she welcomed the tech CEOs to the White House. Her office did not respond to a request for comment about her marriage.

Such public stoicism doesn't surprise Paolo Zampolli, the Manhattan businessman and longtime friend who introduced the Trumps. "She's very strong and very used to fake news - from day one she's been attacked," he said, adding that the presidential campaign prepared her for a spotlight that was more intense than any she's experienced before.

Promoted
Listen to the latest songs, only on JioSaavn.com
"I think she was aware she wasn't a private person anymore," he said. "She wasn't just going to be the gorgeous wife of this very powerful businessman, wealthy man who has a TV show."