Hoops on deck for Obama on Osama bin Laden carrier 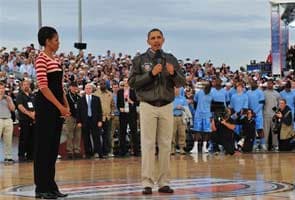 On board the USS Carl Vinson: US President Barack Obama Friday hailed US veterans at a unique college basketball game on the deck of the aircraft carrier which sent Osama bin Laden to his underwater grave.

Obama and his wife Michelle sat courtside on the USS Carl Vinson, among 7,000 spectators in San Diego Bay, en route to an Asia Pacific summit in his native Hawaii, for a game televised on cable sports giant ESPN.

Surrounded by servicemen and veterans, Obama watched Michigan State and North Carolina, two of the top basketball programs in the United States, face off on a hardwood court laid on the flight deck of the giant warship.

On Veterans Day, Obama noted the vessel's key role in the US wars launched after the September 11 attacks in 2001.

"It was from this aircraft carrier that some of the first assaults on Iraq were launched," Obama said in a short speech on the court before the opening tip-off between two teams wearing camouflage uniforms.

"This ship supports what happens, what is happening in Afghanistan."

"Some of you may know, the men and women on the Carl Vinson were part of that critical mission to bring Osama bin Laden to justice," he said.

"To all our veterans to all our men and women in uniform we say thank you," said Obama," after two fighter jets streaked over during patriotic pre-game celebrations.

The Carl Vinson, then believed to be steaming in the Indian Ocean, was the vessel to which the body of Al-Qaeda leader bin Laden was taken after the US special forces raid on his Pakistani hideout in May in which he was killed.

Bin Laden was later buried at sea from the ship with full Muslim rites.

Promoted
Listen to the latest songs, only on JioSaavn.com
Mike Whalen of Morale Entertainment Foundation, which came up with the idea, said it was a coincidence that the Carl Vinson was the ship hosting the event -- with the USS Ronald Reagan originally expected to hold the game.