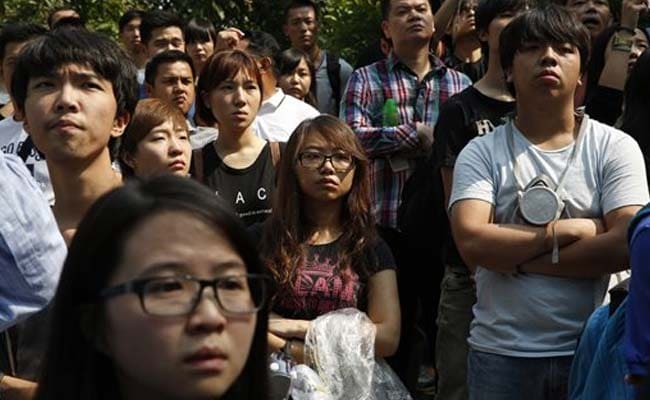 Hong Kong: Three Hong Kong student leaders were stopped from boarding a flight to Beijing today to take their fight for greater democracy directly to the Chinese government after airline authorities said their travel permits were invalid.

The students, led by Hong Kong Federation of Students' leader Alex Chow, had planned to go to Beijing with the intention of meeting Chinese Premier Li Keqiang as efforts to reach agreement with officials in Hong Kong had failed.

A Cathay Pacific spokesman told local media that Chinese authorities had told the airline the students' travel permits were invalid. He did not elaborate, though the representatitve of a student body did comment.

"Cathay has confirmed that their (students') return home card has been cancelled by the mainland authorities, so they could not get the required certificates to get on to the plane," Yvonne Leung, the representative of the Hong Kong Federation of Students, told reporters.

The student leaders left the airport shortly after.

Protesters have occupied key areas of Hong Kong for more than six weeks, camping out in some of the world's most expensive real estate and paralysing parts of the financial centre to demand free elections for the city's leader in 2017.

Local media had speculated that the students would be turned back once they landed in Beijing. China has refused entry before to activists who speak out against Beijing.

About 300 supporters, some with yellow umbrellas that have become a symbol of the democracy movement, showed up at Hong Kong airport where they were greeted by a media pack amid chaotic scenes.

Beijing has declared the protests illegal and said law and order must be maintained in the Chinese-controlled city, where scenes of police firing tear gas and violent clashes have grabbed global headlines.

China rules Hong Kong under a "one country, two systems" formula that accords the city a degree of autonomy and freedom not enjoyed in mainland China, with universal suffrage an eventual goal.

But Beijing said in August only candidates screened by a nominating committee will be able to contest a city-wide vote to choose the next leader in 2017, triggering widespread condemnation and protests.

Local media have reported that authorities are preparing to start clearing the key protest sites of Admiralty, which lies next to government buildings, and across the harbour in the bustling, gritty district of Mong Kok as early as Monday.

The protests drew well over 100,000 at their peak but that number has now dwindled to hundreds.

Promoted
Listen to the latest songs, only on JioSaavn.com
The Hong Kong government has branded the movement's occupation of streets illegal and has repeatedly said open nominations are not allowed under the city's laws.