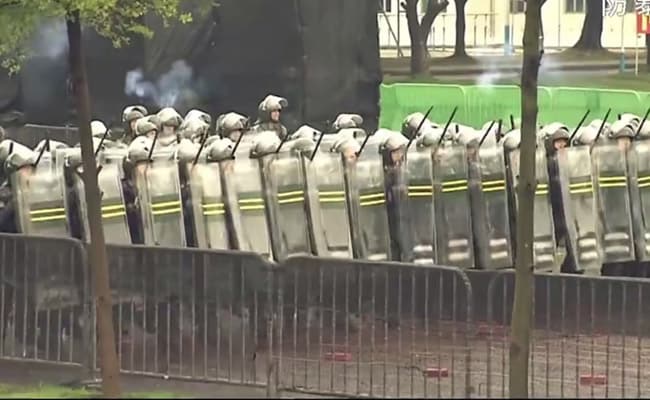 China's military has released a slick propaganda video showing a drill of armed troops quelling a protest in Hong Kong, as its commander for the city voiced determination to maintain law and order following two months of pro-democracy rallies.

The double-barrel signals on Wednesday were the strongest public interventions from China's armed forces into the crisis, which has seen masses of people take to the global financial hub's streets to demand more freedoms.

The three-minute clip also specifically features an "anti-riot" drill in which soldiers with assault rifles, armoured personnel carriers and water cannons disperse a crowd of protesters in Hong Kong.

"All consequences are at your own risk," a soldier yells into a loudspeaker at the start of the drill in Cantonese, the language spoken in Hong Kong rather than the Mandarin of mainland China.

An officer is also filmed holding a red flag that reads: "Warning, stop charging or we use force". The flag has the same words as ones that Hong Kong's police have used when confronting the pro-democracy protesters.

The drill ends with armed troops escorting protesters, who have their arms tied behind their backs, to areas designated by banners as "detention points".

The release of the video came on the same day dozens of people appeared in court in Hong Kong after being charged with "rioting" for their alleged involvement in a protest over the weekend.

The protests were sparked by anger over a government effort to introduce a law that would have allowed extraditions to mainland China.

But the protests evolved into a people power movement demanding wide-ranging democratic reforms, in the most significant challenge to Beijing's rule since the city's handover from Britain in 1997.

Under the terms of the handover deal, people in Hong Kong enjoys rights and liberties unseen on the mainland, including an independent judiciary and freedom of speech.

But many say those rights are being curtailed, citing the disappearance into mainland custody of dissident booksellers, the disqualification of prominent politicians and the jailing of pro-democracy protest leaders.

Beijing had largely left the city's government to deal with the unrest.

But, with violence escalating over the past two weeks and the movement showing no signs of fading, it has sent louder signals that it could intervene.

In rare public comments, Chen Daoxiang, the commander of PLA's Hong Kong garrison, added his voice to the warnings while speaking at a reception on Wednesday night to celebrate the 92nd anniversary of the PLA.

"A series of extreme violent incidents have happened in Hong Kong that has severely damaged Hong Kong's prosperity and stability and seriously challenged Hong Kong's rule of law and social order," Chen said.

"We firmly support the action to maintain Hong Kong's rule of law by the people who love the nation and the city, and we are determined to protect the national sovereignty, security, stability and the prosperity of Hong Kong," he said.

Thousands of PLA troops have been based at the Hong Kong garrison since the handover, but they generally keep a low profile and are rarely seen in uniform in public.

Hong Kong's law states that the PLA troops stationed in Hong Kong "shall not interfere in the local affairs of the region".

But it does allow the PLA troops to be deployed in Hong Kong at the request of the Hong Kong government to "maintain public order".

"But it just might add fuel to fire, making the young even more angry, " Mo told AFP.