In a video recorded during the airport protest on Friday, hundreds of demonstrators can be heard singing and clapping to an a cappella version of "Do You Hear the People Sing?" from "Les Miserables". 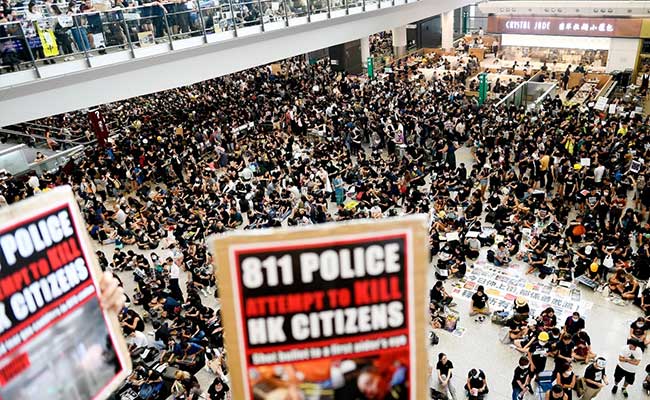 The protesters were singing "Do You Hear the People Sing?" from Les Miserables (File)

Amid the cacophony of the demonstrations being staged this week in Hong Kong, one could hear an unmistakable reverb from a far off domain: Broadway.

Yes, the song that rang out across the region, including in a terminal of Hong Kong International Airport, was, of all things, a show tune. In a video recorded during the airport protest on Friday, hundreds of demonstrators can be seen participating in a sit-down and heard singing and clapping to an a cappella version of "Do You Hear the People Sing?" from the 1987 blockbuster Broadway musical, "Les Miserables." The protest, which shut down airport operations for a second day on Tuesday, began as a demonstration against the use of police force in an earlier mass public protest. That was sparked by a proposal to permit extraditions from the former British colony to mainland China.

The musical interlude seemed a notable peaceful moment, even as the confrontation between demonstrators and riot police turned more violent late Tuesday. And the meaningfulness was not because the words of the song, by "Les Miz" composer Claude-Michel Shonberg and lyricist Herbert Kretzmer, manage to find a resonance in the public outcry in China in 2019:

"Do you hear the people sing? Singing the song of angry men,

"It is the music of a people who will not be slaves again.

"There is a life about to start when tomorrow comes."

For those well-acquainted with the show, it also underlined the power of the musical's global reach, expanded by social media, three decades of international tours and a hit 2012 motion-picture version. The song is introduced late in the first act by the Parisian students who raise barricades in the streets in revolt against French authorities. In the musical - based on Victor Hugo's historical novel of the same title - sad to say, the revolt eventually is put down. Nevertheless, "Do You Hear the People Sing?" has been invoked in political demonstrations around the world in recent years. It's gone from applause-generator in playhouses to emotion-stoking anthem for grass-roots movements.

In the well-sung rendition by the airport chorus, you get whiffs of defiance and altruism, values embodied by the number itself. Of course the full version foreshadows darker events: "The blood of the martyrs will water the meadows of France!" the song declares. Although the lyric that seems to echo most vibrantly remains that one about the life about to start, when tomorrow comes. For these protesters, it is presumably not the tragic dimension of "Les Miz" that beckons them, it's the resilience of the underdog.

First Flight Of Afghan Interpreters Fleeing Taliban Arrives In US