Zhenjiang College and the All-China Women's Federation have been teaching female students how to dress, pour tea and sit just so - all in the name of Xi's "new era." 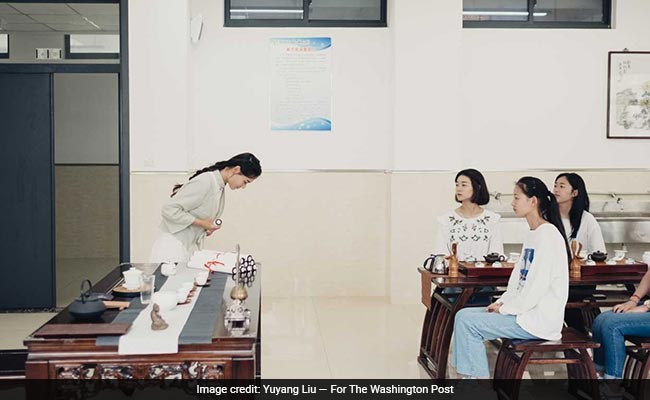 A student shows a tea ceremony in a New Era Women's Course in Zhenjiang College in China.

Zhenjiang, China: At a college in southern China, Duan Fengyan is studying to be an accountant. She is also getting lessons in how to be a woman in the time of President Xi Jinping.

In a course launched in March, not long after China abolished presidential term limits, Zhenjiang College and the All-China Women's Federation have been teaching female students how to dress, pour tea and sit just so - all in the name of Xi's "new era."

"You must sit on the front two-thirds of the chair - you cannot occupy the whole chair," said Duan, 21, demonstrating. "Now, hold in your belly, relax your shoulders, legs together, shoulders up."

The class, offered only to female students, aims to develop "wise," "sunny" and "perfect" women, where wisdom comes from studying Chinese history and culture, sunniness from oil painting and etiquette classes, and perfection from the application of (never too much) makeup.

The Communist Party wants women educated, yes, but with economic growth slowing and the population shrinking, it is bringing back the idea that men are breadwinners and women are, first and foremost, wives and mothers. It is teaching young women that this is the norm.

The college launched the New Era Women's School to heed Xi's call for education in traditional Chinese culture, to help women compete in the job market, said Sheng Jie, who runs the program - but also to prepare them for domestic roles. "Women's family role is more important now," she said.

Forty years into China's great economic transformation, Chinese women are, on average, healthier, wealthier and better educated than ever before, but they are losing ground relative to men.

Since the start of Xi's tenure, China's ranking in the World Economic Forum's global gender gap index has dropped significantly - from 69 out of 144 countries in 2013 to a 100th-place finish in 2017.

The country's top cadres do not seem concerned. The party wants women educated, but it is worried that educated women will decide not to marry men and have kids, compounding the surplus of males caused by the one-child policy and potentially destabilizing the country.

"The direction of the future is that women are supposed to play the role of wife and mother in the home," said Leta Hong Fincher, author of "Betraying Big Brother: The Feminist Awakening in China."

Though this thinking has been around for at least a decade - most notably in sexist messaging about marriage - the Zhenjiang program appears to be the first college course in feminine virtue under Xi.

The Washington Post was the first foreign media outlet granted access to the campus and was allowed to interview students - while their teachers listened in.

"According to traditional culture, women should be modest and tender, and men's role is working outside and providing for the family," said Duan, 21, before a class on tea ceremonies.

"I want to be a model for my children."

In his first five years in power, Xi cast himself as a champion of women's rights, declaring, in a speech at a United Nations summit on women, that women's equality is a "great cause."

But his words were undercut by actual policy. China has detained five young feminists and thwarted some LGBT activism. Xi has not made significant progress on getting more women into the highest levels of leadership, nor has he focused on fixing the gender pay gap.

His tenure has been less about pushing for equality than promoting a vision of "harmonious" male-female households with a working father and a virtuous mother who cares for children and the elderly.

The party insists that this reflects the Confucian values at the core of Chinese culture. Critics counter that culture changes and that China should look forward, not back.

"Our traditional culture is filled with restrictions on - and the oppression of - women," said Lu Ping, a prominent Chinese feminist who ran a website that was recently censored. "Can we push women back into the traditional roles?"

People are trying. Last year, news broke that a company in northern China was operating a "traditional culture school" where women were told to "shut your mouths and do more housework" and practiced bowing to their husbands.

"Don't fight back when beaten. Don't talk back when scolded. And, no matter what, don't get divorced," a female teacher there said, according to footage published by Beijing's Pear Video.

"Women should just stay at the bottom level of the society and not aspire for more," another instructor said.

When the story went viral, local officials said its message violated "socialist core values" and called for an investigation.

But Feng Yuan, a Beijing-based anti-domestic-violence campaigner, said the focus on wifely virtue persists - and is promoted.

"At the moment, we only see emphasis on women's family role," she said. "There's never any emphasis on men's role."

In the halls and classrooms of Zhenjiang College, self-improvement is indeed women's work.

The course was the brainchild of the local branch of the All-China Women's Federation and is overseen by women. The students are women. There is no equivalent course for men.

Both teachers and students said that young women should constantly seek to improve their "quality" to stay competitive. Success requires constant "self-cultivation" - not a bad thing when it applies to all genders.

Li Ziyi, a 19-year-old studying early-childhood education, said she'd been taught years ago that, for women, good grades are not enough. "When I was in secondary school, my teacher told us that the college entrance exam is the last fair exam in your life, because it doesn't look at your face," she said.

Yes, handsome men have an advantage, she added, but "society still has a higher requirement for girls."

Her classmate, Wang Caidie, 18, a nursing student, said female nurses are advised to wear "light makeup" to look professional, while male classmates are given no instructions at all.

The double standard was not lost on them, but neither were the lessons in how to sit, stand and serve tea - which they considered fun and useful.

"Even before the job interview starts, we will deliberately pay more attention to how we sit, how we stand up. That is our advantage compared to those who haven't attended these classes," Duan said.

Sheng, the program director, declined to talk much about women's rights - she is a teacher, not a feminist, she said.

Her goal is to teach young women what they need to know and, in so doing, help the nation. "The country is emphasizing traditional culture, so we are providing courses," she said.

"This is a new era. History is moving in a better direction."

The Washington Post's Yang Liu in Zhenjiang and Luna Lin in Beijing contributed to this report.

(Except for the headline, this story has not been edited by NDTV staff and is published from a syndicated feed.)
Comments
Xi Jinping EraChinese College