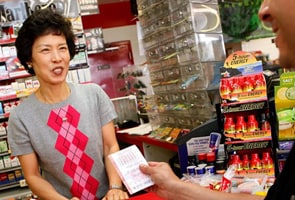 Bishop, Texas: The odds that Joan Ginther would hit four Texas Lottery jackpots for a combined nearly $21 million are astronomical. Mathematicians say the chances are as slim as 1 in 18 septillion -- that's 18 and 24 zeros.

Just as unlikely? Getting to know one of the luckiest women in the world. "She wants her privacy," friend Cris Carmona said.

On a $50 scratch-off ticket bought in this rural farming community, Ginther won $10 million last month in her biggest windfall yet. But it was the fourth winning ticket in Texas for the 63-year-old former college professor since 1993, when Ginther split an $11 million jackpot and became the most famous native in Bishop history.

But she's a celebrity who few in this town of 3,300 people can say much about. "That lady is pretty much scarce to everybody," said Lucas Ray Cruz, Ginther's former neighbour. "That's just the way she is."

At the Times Market where Ginther bought her last two winning tickets, the highway gas station is fast becoming a pilgrimage for unlucky lottery losers. Lines stretch deep past a $5.98 bin of Mexican movie DVDs, and a woman from Rhode Island called last week asking to buy tickets from the charmed store through the mail.

She was told that was illegal. The woman called back to plead again anyway. The Texas Lottery Commission has seen repeat winners before, but none on the scale of Ginther. Spokesman Bobby Heith said the agency has never investigated Ginther's winnings -- three scratch-off tickets and one lottery draw -- for possible fraud but described the verification system as thorough. Her other winnings -- both from scratch-off tickets -- were $2 million in 2006 and $3 million in 2008.

So how did Ginther do it, then? Good luck pinning her down to ask.

Ginther has never spoken publicly about her lotto winnings and could not be found for comment. She now lives in Las Vegas after moving away from Bishop, and an answering machine message for a telephone number listed at her address says not to leave a message.

She asked the few people who've exchanged more than brief pleasantries with her not to grant interviews and sneaked into lottery headquarters in Austin to collect her winnings with the least publicity the state offers jackpot winners.

But spend a few hours in her hometown -- and equal time scouring public records -- and a contrasting profile emerges. Her home address in Las Vegas is on a street called Paradise Drive.

When USA Today asked readers in 2000 to sound off on airline service, Ginther groaned over a flight attendant who carted away her cheese and crackers and a sundae too soon. Two years later, she grumbled to the Las Vegas Review-Journal about a proposed monorail running through her exclusive condominium towers.

"I moved here because I wanted to have a beautiful home with a great view and that's what I have. I didn't expect to have a monorail come down here with thousands of tourists every day," Ginther told the newspaper, in what might have been the only time she was directly quoted in the media.

Nitpicking first-class service, and mad the view in her luxury home might be spoiled? Bishop residents may not know much about Ginther -- but they know that's not her. Here around the cotton farms and boarded-up downtown, Ginther, who over the years regularly visited the town to see her father who died in 2007, is called benevolent as much as she's called lucky. They say she bought the church a van. Gave money to the family that runs the Days Inn off the highway. When she moved, she donated her home to charity.

Sun Bae, who owns the Time Market and sold Ginther her last two winning tickets, said she drives around in a bland Nissan sedan but once bought a nicer car for someone down on their luck. Bae said Ginther doesn't even own a cell phone. "She is a very generous woman. She's helped so many people," Bae said.

Calculating the actual odds of Ginther hitting four multimillion-dollar lottery jackpots is tricky. If Ginther's winning tickets were the only four she ever bought, the odds would be one in 18 septillion, according to Sandy Norman and Eduardo Duenez, Math professors at the University of Texas at San Antonio.

Exactly how often Ginther plays is unknown. But Norman and Duenez said that a habitual player winning four times over a 17-year span is much less far-fetched.

At the Times Market, Bae and store regular Gloria Gonzalez said they've certainly watched Ginther buy her share of tickets over the years. And not just for her.

Promoted
Listen to the latest songs, only on JioSaavn.com
Gonzalez said when her elderly father would sit at the store's window booth and scrub through dollar scratch-offs, Ginther would surprise him with a $50 ream of tickets. "Win, win, win," Ginther would chant, rooting him on.

After all, the only way to win is to keep playing. Ginther is smart enough to know that's how you beat the odds: she earned her doctorate from Stanford University in 1976, then spent a decade as a faculty at several colleges in California teaching Maths.