Here's How A Perfectly Rectangular Iceberg Is Floating In Antarctica

An iceberg the size of a college campus broke off a large ice shelf fed by several glaciers in the Antarctic Peninsula. 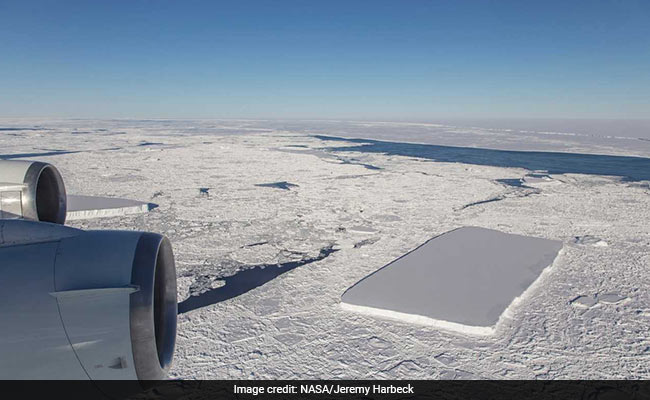 The rectangular iceberg was photographed as part of a topographic mapping project.

A college-campus-size iceberg spotted on the Antarctic Peninsula margins is upending public expectations of classic Titanic-esque icebergs with sharp spires jutting from the ocean surface.

An aerial photo shared Wednesday by NASA captured a rectangular slab of ice sliced so smoothly that it appears unnatural. Experts say they believe the iceberg fractured in May from Larsen C, a large ice shelf fed by several glaciers on the east side of the peninsula. They're still unsure whether it will cause the rest of the shelf to destabilize.

"Ice shelves release large icebergs from time to time. They do this naturally," said Christopher Shuman, a research scientist at the University of Maryland Baltimore County's Joint Center for Earth Systems Technology at NASA. It means that the ice shelf is changing, which is not surprising given the changes scientists have seen nearby, he said.

Wow, it's been amazing to see what a splash our photo of a tabular Antarctic iceberg, by #IceBridge's Jeremy Harbeck, has made. Fly toward the berg with @NASAArmstrong's DC-8 forward camera. More: https://t.co/kADuUL455Fpic.twitter.com/tm4Rydh8V3

Larsen A, an ice shelf farther north on the peninsula, broke up in 1995. Larsen B broke up in 2002. Larsen C itself calved an even larger iceberg in 1986, Shuman said. It was recorded at 2,780 square miles - larger than Maryland - until last July, when it calved an iceberg the size of Delaware, known as A-68.

The rectangular iceberg, photographed as part of a topographic mapping project tracking changes in polar ice shelves called Operation Ice Bridge, fractured in May after A-68 crashed into Bawden, a rocky ice-covered island in the northwest, and created several small berg fragments.

"This is not good news for the Larsen C in a general sense," Shuman said. But the iceberg could continue to be resupplied with ice from land-based glaciers, as it was after the bigger iceberg broke up in 1986.

A larger problem, Shuman said, is that the ice front is as far west as it's ever been, based on satellite imagery. "The fact that the edge is so far west is not a good sign; Larsen A and Larsen B broke up just up the peninsula," he said.

National Snow and Ice Data Center research scientist Twila Moon said it's unsurprising that the iceberg fractured in straight lines. That's consistent with an iceberg calved from floating ice in that region, she said. Ice is a mineral; it has a crystal-like structure and breaks the way a shard of glass would. 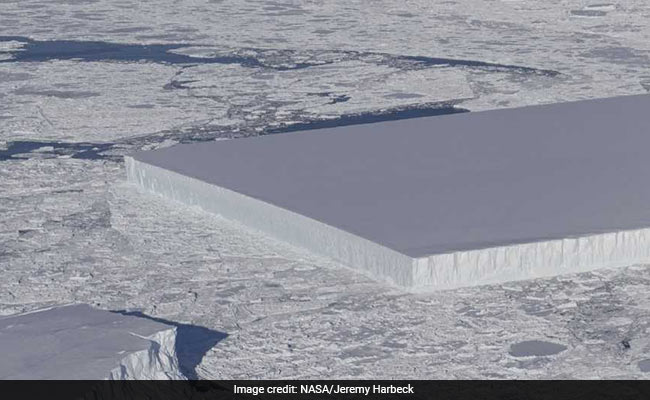 An aerial photo shared Wednesday by NASA captured a rectangular slab of ice sliced so smoothly that it appears unnatural.

"When a piece of glacial ice is in contact with the ocean floor, the interference at the base causes it to calve off differently, creating misshaped icebergs," Moon explained. When an iceberg breaks off from a shelf of floating ice like Larsen C, there's no friction controlling how it breaks up.

Shuman said the shape is not surprising, though it's unusual to see such sharp angles.

"It's all about the force of the iceberg striking the ice rise. When ice is fracturing, it tends to break on the line of force," he said. Moreover, there are other pieces nearby that are relatively rectangular.

"It's a part of the life cycle for ice shelves: They push out far enough that they break off in big chunks," he said. "We do not know yet for sure that this was climate-change-related or that we're looking at a dramatic change."

Still, Shuman added, other areas show definite signs that ice fronts are retreating inland dramatically and at a full-blown pace.

(Except for the headline, this story has not been edited by NDTV staff and is published from a syndicated feed.)
Comments
Rectangular IcebergNASA Iceberg