He "Loves Your Ass": US Ambassador To European Union Reveals 'Trump-Speak'

Gordon Sondland said he was trying to explain to Trump how Ukraine's new president, Volodymyr Zelensky, was "very willing to work with the United States and was being very amicable." 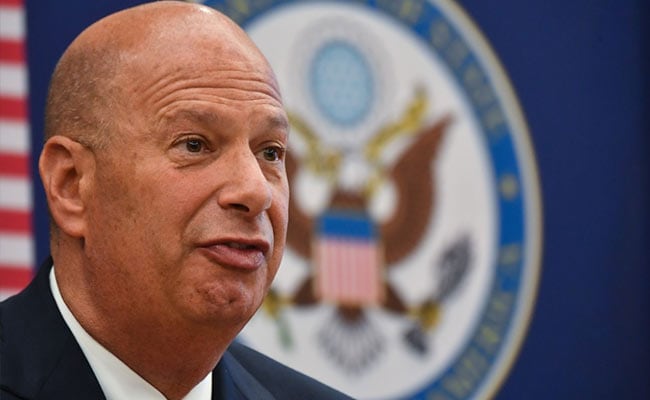 Gordon Sondland acknowledged he may have told Trump that Ukraine's leader "loves your ass."

Among the revelations Wednesday in the impeachment inquiry into Donald Trump -- an ambassador revealed how he employs profanity-laden 'Trump-speak' in hopes of relating to the US president.

In an unusual moment of levity in the televised hearing, Gordon Sondland, the US ambassador to the European Union, acknowledged he may have told Trump that Ukraine's leader "loves your ass."

"That sounds like something I would say," Sondland, a hotel owner who received the ambassadorship after donating to Trump, said with a smile when asked by the Democratic counsel about the account.

"That's how President Trump and I communicate -- a lot of four-letter words. In this case, three-letter," he said, drawing laughter from the crowd.

Sondland said he was trying to explain to Trump how Ukraine's new president, Volodymyr Zelensky, was "very willing to work with the United States and was being very amicable."

"So putting it in Trump-speak -- by saying 'he loves your ass, he'll do whatever you want' -- meant that he would really work with us on a whole host of issues," Sondland said.

The colorful language was first revealed to congressional investigators by David Holmes, a US diplomat in Ukraine, who described how Sondland invited the US team to lunch after a meeting in Kiev with Zelensky.

Holmes said that Sondland, after ordering a bottle of wine, connected by his mobile phone with Trump, whose voice was "very loud and recognizable."

Sondland "went on to state that President Zelensky 'loves your ass.' I then heard President Trump ask, 'So, he's gonna do the investigation?'" Holmes said.

Trump is facing impeachment calls over allegations he demanded that Ukraine dig up dirt on his domestic rival Joe Biden as a condition for a summit with Zelensky and the release of military aid to fight Russian-backed separatists.

Sondland told the House Intelligence Committee he was following Trump's orders in seeking a "quid pro quo" deal with Ukraine, adding that he disagreed with the freeze on aid.

The president -- who last month called Sondland "a really good man" -- told reporters on Wednesday that "I don't know him very well."