He Grew Up Abused In Foster Care. Now He's An Executive, And Success Is His Revenge

Pemberton, 50, is now a human resources executive for Globoforce and he initially didn't often tell the story of his painful childhood in New Bedford. 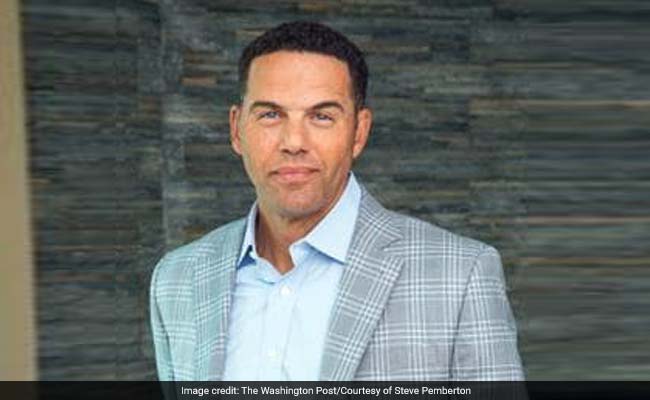 Steve Pemberton was a forgotten child, abused and neglected and kept under the thumb of a punishingly cruel foster family in Massachusetts. Through sheer force of will, he decided to get revenge on the family that told him he was worthless by setting his sights on achievement.

That single-minded drive helped him graduate from Boston College, and eventually find a wife, have children - and become a top executive at companies such as Monster.com and Walgreens.

Now a human resources executive for Globoforce, Pemberton, 50, initially didn't often tell the story of his painful childhood in New Bedford. His whole life, he'd seen people avert their eyes from situations that are difficult or make them wince.

But when his son asked him about his past, he thought he owed his children the truth. It was complicated, and they were young, so he wrote a book about the horrors he endured as a child, how he uncovered his identity and how he was able to eventually piece together the life he was told he could never have.

Pemberton imagined the book would sit on the family shelf for future generations to read a chapter every now and then.

But he had a publisher and, to his surprise, lots of people read the book - "A Chance in the World" - and wanted to know more. It was a bigger surprise when it was turned into a movie of the same name and screened at 500 theaters this week for one night only, with some of the proceeds going to organizations that benefit kids in need. There will be a digital release of the film in the fall.

The book's title came from the diary of one of Pemberton's babysitters when he was a toddler. The sitter saw Pemberton's desperate existence and wrote that the little boy "didn't have a chance in the world."

Pemberton now tells his story at foster care conferences and more recently on news shows, where people marvel at how he beat all the odds.

But the question often still remains: Just how does a child who had to fend for himself at every turn, who was beaten and abused by the very people who were supposed to be in his corner, grow up to thrive?

"When the good Lord was handing out defiance I stood in line longer," Pemberton said with a slight laugh in a recent phone interview.

He's learned to boil down his struggle when people ask. But the truth is more complex, and more heartbreaking.

Pemberton's birthparents were both deeply flawed and died when he was young, he learned when he was an adult. As a child, he imagined they'd come get him someday. His mother, an alcoholic, could not take care of herself, let alone her four children.

When Pemberton was 2, before he and his siblings were taken from his mother and scattered, they were often left alone for days and would dig through trash bins for food. His father, a prizefighter, was killed by someone who hated him so much he set his father's body on fire in the funeral home.

Pemberton's white mother and black father dated, though it was unclear how long their relationship lasted. He was in foster care from the time he was 3. His case workers had a hard time placing him because they didn't know whether he should be with a white family or a black family, he recounts in his book. He had blue eyes and a blond afro, and he looked different from everyone around him.

He was in and out of foster homes, and eventually landed with one where he stayed for 11 years.

In his book, Pemberton writes unflinchingly about physical torture, food restrictions and emotional abuse in that home: He wasn't allowed to make eye contact with his foster parents, could only speak when spoken to, was not permitted to read in front of his illiterate foster father - and he endured regular beatings that left him on his hands and knees cleaning up his own blood. He writes of being burned and whipped, and sleeping in the doghouse with a Doberman named Rustina.

For many children, that would have broken their spirit. For Pemberton, it steeled his resolve.

"Excelling in school, outsmarting them in any way I could was as important to me as breathing air," he said.

But he was terrified of them and afraid to tell anyone what was going on in the home. As a quiet and very bright child, he retreated into schoolwork. He impressed his teachers, earned top grades and was always the kid who won the spelling bee.

"I had to do well because there was no safety net for me. You're pretty much all you have," he said. "I prayed for my family to come get me, and after a while I realized they were not going to come get me, so I had to do for myself."

He describes several "lighthouses" in the book - people who showed him small acts of kindness that he held onto for dear life. There was a neighbor who brought him boxes of books, a construction crew that let him be part of their crew for a few weeks, a letter carrier who offered him an encouraging word.

While these may seem trivial, they meant the world to him as a child.

"A lighthouse doesn't know upon who it shines, people just sail their ship toward it," he said. "I met these people who are human lighthouses, they are everyday heroes."

He met more of these lighthouses, who helped him apply to college and get a scholarship, and even one in the foster care system who helped him get out of his foster care home when he was 16. Yet another was a teacher who took Pemberton in and let him live with him for a week, which turned into a year - the best year of his life up to that point.

The teacher who took him in, John Sykes, taught him fatherly lessons.

"He would often talk to me about character. I said, 'tell me how you define character,' " Pemberton said. "He said, 'It's being the same person in the dark that you are in the light.' "

When Pemberton got a scholarship to Boston College, he finally felt free. But before him was the difficult task of figuring out who he was, apart from just a struggling boy.

"I don't remember a time when I wasn't living in some kind of defiance," he said. "But at some point that defiance has to be shaped and nurtured and directed. If not, it can destroy you."

At Boston College, he began to learn when to stand his ground and when to give in for his best interest. After college, he dedicated himself to finding his parents, and learned that they had both died.

But he found grandparents, siblings, aunts and uncles - some of whom never knew he existed. A few accepted him with open arms, others were more tepid, and at least one, a white sister, rejected him flat-out because he's black.

He got his foster care file and saw the first and only photo of himself as a child, taken by a social worker.

What he really wanted was his own family, so he set out to create one. He met his wife, Tonya, on a vacation in Martha's Vineyard and they immediately clicked. They started dating, then got married and had three children, two sons and a daughter. He said the four of them are the pride of his life. Because of them, he said, the arc of his life has balance.

Professionally, Pemberton worked at Boston College in admissions, then went on to Monster.com and Walgreens, where he was chief diversity officer. He is now chief human resources officer with Globoforce, a company that, among other things, designs software to recognize and reward employees.

He and Tonya, who live in the Chicago are with their children, set up a foundation with the same name as the book to help young people in need with scholarships and other support.

When he gives speeches and meets kids in foster care, he tells his story in hopes of inspiring them to fight their way out like he did.

He gives them this message: "This adversity that you inherited, you didn't ask for it, you did not create it, but maybe this is your opportunity to right the wrong. That's the power of adversity. It gives you strength."

He said he's not angry about his past, doesn't wake up with nightmares or walk around with a chip on his shoulder. He said he's melted away his angst and rage in another act of defiance aimed at his foster family and others who tried to keep him down.

"For me to walk through the world angry is to give them control over my life," he said. "They are not allowed to have that. Nobody is."

In the end, he said, all he wanted was to find his family. And he has.

"I think you can choose your family after all," he said.

(Except for the headline, this story has not been edited by NDTV staff and is published from a syndicated feed.)
Comments
Foster Careabused foster care