Sammy, 56, had tried to prepare for the storm. He had resolved to stay up all night Saturday, watching the rising waters of Halls Bayou a few blocks away, ready to flee at a moment's notice. But he fell asleep... 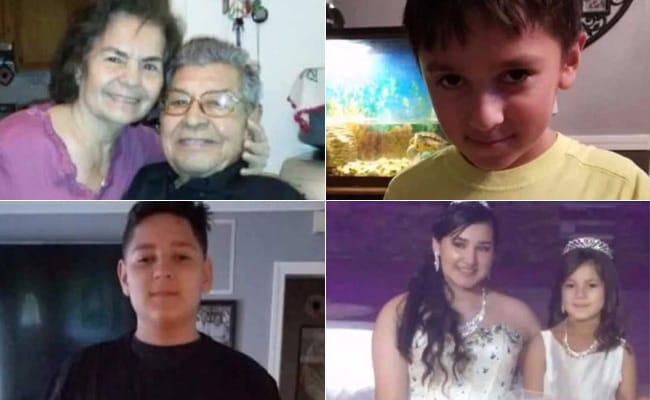 Manuel and Belia Sandivar and their 4 great-grandkids: Xavier (top), Dominic, Devy and Daisy

Houston: Ric Saldivar, 53, has a big family - lots of brothers, spread over east Houston and beyond.

After floods stranded them in their respective homes, a chain of phone calls between the brothers and their wives informed Saldivar that, suddenly, his family may be much smaller. This is what he learned:

His mother and father, both in their 80s, were missing and presumed dead, he told The Washington Post. So were four young relatives, ages 6 through 16 - all of them trapped in a sinking van as they tried to reach his house through Sunday's floods.

His parents, Manuel and Belia, lived about 10 miles away, he said - across a bayou in northeast Houston.

"They both have Alzheimer's," he said.

His brother Sammy had recently moved down from Missouri to care for the couple. "He was doing a real good job," Ric Saldivar said.

Sammy, 56, had tried to prepare for the storm. He had resolved to stay up all night Saturday, watching the rising waters of Halls Bayou a few blocks away, ready to flee at a moment's notice. "But he fell asleep. . . . The neighbors woke him up," Ric said. "They said the water was coming up."

Several family members lived in that flooding pocket of Houston. Danny Saldivar and his wife lived one street over from the parents. Danny's daughter lived on yet another street - but she had gone out that night, leaving her 16-year-old to watch her three younger children.

"The kids were freaking out," Ric said.

So as Danny and his wife made their own plans to escape, he told Sammy: Take the keys, take the van, take them to Ric's house.

Sammy loaded his parents into Danny's van. He loaded the children into the back - Devy and Dominic, both in their teens, and 8-year-old Xavier and his 6-year-old sister Daisy - and set out into the torrential rain on Sunday afternoon.

The bridge over the bayou on Green River Drive was covered in water, but the guard rails were peeking over the tops, so it didn't look too deep.

The van made it across the bridge. But the road dipped sharply on the other side, and before Sammy could do anything, the van was floating.

It bobbed left and right. Sammy pressed the gas, but the wheels just spun underwater.

"He panicked," Ric said. "He got out of the seat without even undoing the seat belt, and squeezed through the window."

Sammy clung to a tree branch in the water and tried to open the doors. But the doors wouldn't open. The children were in the back, behind a storage cage, and there was no way to get to them.

"He was yelling at the kids to climb out of the back of the van. I'm sure they couldn't reach it," Ric said. "He could hear the kids screaming, but couldn't push the doors open. That's what he keeps hearing in his head. And the van just went underwater, and was gone."

Sammy clung to that tree branch for the better part of an hour, yelling and screaming - until someone finally came along and threw him a rope.

The deaths have not yet been confirmed by authorities.

The Harris County Sheriff's Office said Monday night on Twitter that deputies had rescued a man from floodwaters on Greens Bayou in East Houston. The man told deputies that his van - carrying six relatives - was submerged under rushing waters, but authorities have not located the vehicle.

Harris County Sheriff's Office spokesman Jason Spencer told The Washington Post on Tuesday that no bodies have been recovered.

Sammy ended up at a shelter, where he borrowed a phone and called Danny. Danny told his wife, who called Ric, who's been calling other people ever since.

"All of us are split apart," Ric said. His house on the eastern edge of Houston is dry enough. It would have been safe if Sammy had reached it, but now Ric can't get to Sammy or anyone else.

"The news is saying just stay home," he said.

He's been trying to plan funerals for his parents. He's not sure how anyone will pay to bury the children.

"Our thoughts and prayers are with the family, the Pasadena High School and Williams Elementary Communities during this most difficult time. Our deepest sympathy for the family," it read.

For the moment, Ric Saldivar's parents and grandnephews and nieces have not even been found.

"They basically let us know they're not going to be able to do anything until the water goes down," he said. "I understand. It's not going to change the outcome. And the longer I don't see them, the longer it's not true."


(Except for the headline, this story has not been edited by NDTV staff and is published from a syndicated feed.)
Comments
Houston FloodsHurricane Harvey HoustonHouston Flood Deaths