Harvey Weinstein Is Living On His Oceanfront Estate, Developing Scripts

Harvey Weinstein has also been developing new scripts as a producer, despite the fact that his bankrupt company's assets were sold to a Dallas-based private-equity firm. 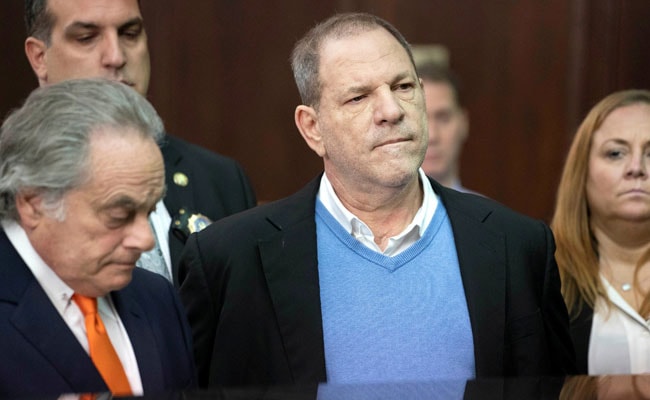 Harvey Weinstein has appeared increasingly somber during his three court appearances while facing allegations of sexual assault. On Monday, he was wearing a dark suit and a grimace as he was being indicted on three new charges.

But away from court he has led a quiet, industrious life, spending time developing scripts at his Connecticut oceanfront estate as the criminal proceedings against him inch forward, according to new details revealed a New York courthouse.

He's even working as a paralegal to his own defense attorney.

"He [has been] very helpful to the defense so far," his lawyer, Benjamin Brafman, told reporters outside the courtroom, after revealing that Weinstein has been working as a paralegal.

The disgraced movie mogul travels from his home in Westport, Connecticut, to Brafman's midtown offices on the east side of Manhattan to perform the job, Brafman said. He did not elaborate on whether Weinstein was being paid for the work or whether he was working on legal cases besides his own.

He did say that Weinstein was developing new scripts as a producer, despite the fact that his bankrupt company's assets were sold to a Dallas-based private-equity firm, Lantern Capital, in May.

"He is doing as well as can be expected for someone under these circumstances," the lawyer said of the mogul, who over the past eight months has been accused by more than 80 women - including several models and Hollywood actresses - of sexual misconduct, after investigations by the New York Times and the New Yorker.

Brafman made the statements after a short court session Monday, where Weinstein was being indicted on three charges involving a third alleged victim: one count of a criminal sexual act in the first degree and two counts of predatory sexual assault. In May he was indicted on three other sexual-assault charges related to incidents involving two accusers. Collectively, Weinstein, 66, faces a maximum sentence of life in prison.

Weinstein has pleaded not guilty to all six charges. His attorney said there was consent in the circumstance of the new accuser, whose identity was not revealed.

Weinstein has been living at his Westport property since his arrest in May on suspicion of sexual assault. The judge at the time set bail at $1 million and allowed Weinstein to continue living at the estate and move between there and New York, site of his company, providing he surrender his passport and wear an ankle bracelet.

Weinstein sold the estate on the Long Island Sound to a neighbor for a reported $16 million in March but is permitted under the sale agreement to live there until February, according to Brafman.

Weinstein's children also live with him at the property, Brafman said. The lawyer initially said that Weinstein's estranged wife, fashion designer and entrepreneur Georgina Chapman, also lives at the estate, but after apparently being corrected by Weinstein, Brafman said Chapman does not live with her husband. Weinstein returned to the home after spending several months at an addiction treatment center in Arizona earlier this year.

In light of the new charges, Assistant District Attorney Joan Illuzzi requested Monday that Weinstein be placed under house arrest in New York.

"The charges he's facing now are substantially more serious than he was facing when he appeared before you," Illuzzi told the judge. "He should be confined to home arrest and that home should be in Manhattan."

But Brafman argued that having to remain in New York would impose undue hardship on both himself and Weinstein if the latter was forced to rent an apartment in Manhattan. He cited multiple reasons Weinstein shouldn't "be pushed to New York," including the fact that his doctors were close to his Connecticut estate and that a rental in Manhattan would cause a "circus atmosphere" because reporters would camp out there.

But primarily, Brafman argued, his client should be allowed to stay in Connecticut because that was where he felt most comfortable. "He has no place to live [in Manhattan]," Brafman told the judge. "The house he lives in for the last 23 years [has been] the family home."

Weinstein is closely associated with the Tribeca area of Lower Manhattan just blocks from where the proceedings are taken place, having run his company from there for many years. But he does not live in the neighborhood.

Judge James Burke agreed that Weinstein can stay in Connecticut providing he continues to abide by the terms of the bail.

"We won this round," Brafman told reporters outside the courtroom.

He then went on to describe his client's life in more detail. It was Weinstein's goal to continue working in film, the lawyer said, and he was making strides in that regard even amid the criminal proceedings.

"He is a brilliant maker of movies and scripts and is trying to pursue other projects," Brafman said. "Hopefully he can go back to making movies."

(Except for the headline, this story has not been edited by NDTV staff and is published from a syndicated feed.)
Comments
Harvey WeinsteinHarvey Weinstein scandalSexual Assault