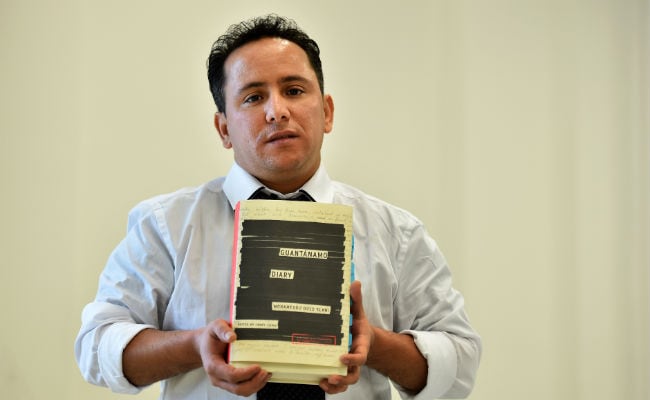 Washington: The first book published by a longtime Guantanamo Bay inmate that describes torture, humiliation and despair during 13 years in captivity was selling briskly in the United States on Wednesday and drawing hard-won attention to his case.

Mohamedou Ould Slahi's account from the US naval base in Cuba, "Guantanamo Diary" was published on Tuesday after a seven-year legal battle.

It recounts ice baths, degradation and myriad humiliations in a first-person telling of his interrogation during the American war on terrorism from a prisoner who has never been charged by the United States with a crime and was ordered released by a US federal court in 2010. That order was later vacated and Slahi, 44, has continued to be held.

The book's publication coincided with President Barack Obama's State of the Union address, seven years after the Democratic president vowed to close the prison in Cuba during his first year in office. Those efforts have been blocked by lawmakers who think the inmates pose a national security threat.

Slahi's 466-page handwritten manuscript was initially classified by the US government and heavily redacted before publication.

"He's an innocent man. He's being detained unlawfully and he should be the one telling his story. Without censorship," said Slahi lawyer Hina Shamsi of the American Civil Liberties Union.

"Guantanamo Diary" was in the top 100 on Amazon's best sellers list and in Barnes & Noble's top 50 on Wednesday.

"It's only been on sale one day but my phone is ringing off the hook about it, so it's obviously reaching people the way we want it to," said publicist Liz Garriga of Hachette Book Group, the parent company of Little, Brown and Co, the book's publisher.

Shamsi said Slahi's ordeal is more proof that torture does not work. She cited an excerpt in which he describes his interrogators as telling him: "All you have to say is 'I don't know,' 'I don't remember' and we'll **** you."

Slahi's family held a news conference in London pleading for his release on Tuesday as the book came out in the United Kingdom. Several celebrities, including actors Stephen Fry and Colin Firth, recorded excerpts of the book that were posted online.

Fry reads Slahi's depiction of his treatment outside of Guantanamo at the hands of fellow Arabs following directions from Americans: "They stuffed the air between my clothes and me with ice cubes from the neck to my ankles and whenever the ice melted, they put in new, hard ice cubes. Every once in a while one of the guards smashed me most of the time in the face."

Slahi, of Mauritania, said he turned himself in to authorities there weeks after the 2001 attacks and was taken to Jordan, where he was interrogated for several months before being sent to Afghanistan and to Cuba, according to transcripts of his American military tribunal proceedings.

Slahi was described by the 9/11 Commission that investigated the hijacked plane attacks on the World Trade Center and the Pentagon as "a significant al Qaeda operative" who helped arrange for the Hamburg cell members - including two Sept. 11 hijackers and the roommate of a third (Mohamed Atta) - to travel to Afghanistan for training.

Promoted
Listen to the latest songs, only on JioSaavn.com
In the book, Slahi describes his relief in July 2002, despite having been stripped naked, at the thought of a transfer to the United States.

"Around my private parts, one of the team wrapped a diaper. Only then, I was dead sure that the plane was heading to the US Now I started to convince myself that 'everything's gonna be alright.'"
© Thomson Reuters 2015
Comments
Guantanamo InmateCuba PrisonGuantanamo Inmate bookGuantanamo BayGuantanamo DiaryMohamedou Ould Slahi

Indian Among Six Indicted In Amazon Bribery Case In US