Gregory Eubanks, 41, of Fort Washington, Maryland, was reported missing by his family on Saturday to Prince George's County police. 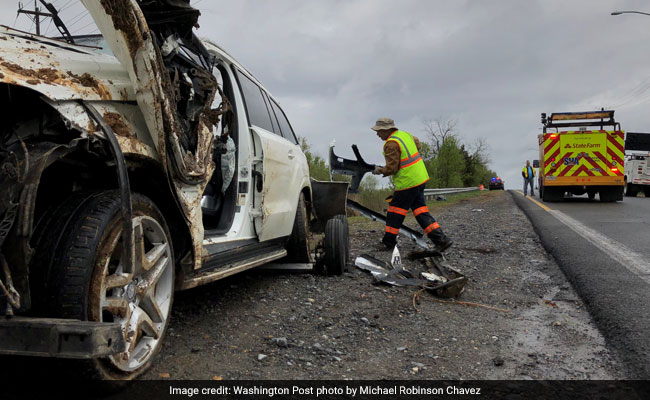 A tow truck driver cleans up wreckage on the MD 210 on-ramp to the DC Beltway, where the man was found

A man survived a crash on a highway near the Capital Beltway in Maryland that might have happened days ago, according to officials.

Ron Snyder, a spokesman for Maryland State Police, said the man, whom he identified as Gregory Eubanks, 41, of Fort Washington, Maryland, was reported missing by his family on Saturday to Prince George's County police.

Eubanks was taken to the University of Maryland Prince George's Hospital Center in Cheverly. Jania Matthews, a spokeswoman for the hospital, said he was in fair condition.

On Monday, officials were still trying to figure out details surrounding the crash, which occurred on northbound MD 210 near the Beltway, according to Alan Doubleday, assistant fire chief for the Prince George's County Fire Department.

Doubleday said authorities received a call around 7:55 a.m. Monday that a contractor for the state's highway department had found a damaged guardrail along MD 210 at the Beltway. He found a man lying on the ground - about a football field away from a vehicle that had crashed - in an embankment area, according to Doubleday. The man, who was later identified to be Eubanks, was said to be conscious and alert when rescuers arrived and was talking to them.

Eubanks told rescuers from Prince George's County Fire that he had crashed his vehicle Friday night and had been lying there in heat and rainstorms.

Camille Eubanks, the man's mother, said her son told her he had left a club in Prince George's County and was cut off by another driver before the accident occurred. His family reported him missing when he didn't show up for a wedding on Saturday. His phone had died, his mother said, with calls going to voice mail.

Her son is in a "lot of pain," Eubanks said, but is "alert and responsive."

"He has some fractures but other than that, he's okay," she said. "He's dehydrated and all. He's been out there since Friday night."

Doubleday said Eubanks may have been ejected from his vehicle or gotten out on his own. He said the car had "significant damage." Eubanks was apparently alone in the vehicle at the time of the crash. Doubleday said crews and rescue dogs did a search of the area after the man was discovered and found no one else.

"We're still trying to piece everything together," Doubleday said Monday. "It's interesting for sure. We've had hot and then cold weather and he's been outside for the duration."

The D.C. area was hit with heavy rainfall and winds Sunday night and into Monday morning.

"He's fortunate that they found him," Doubleday said.

(Except for the headline, this story has not been edited by NDTV staff and is published from a syndicated feed.)
Comments
Capital Beltway accidentMaryland car crashGregory Eubanks