Olga Ladyzhenskaya on Google doodle: Olga Aleksandrovna Ladyzhenskaya was born in the town of Kologriv in the erstwhile Soviet Union. Her father was a mathematics teacher and is credited with inspiring her love of mathematics. 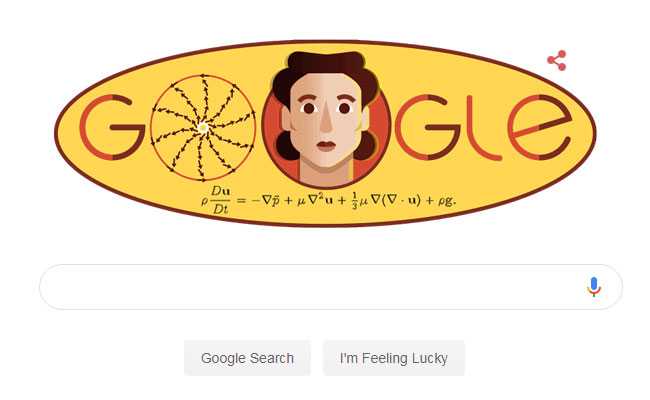 Today's Google Doodle celebrates the 97th birth anniversary of Russian mathematician Olga Ladyzhenskaya. Ladyzhenskaya was known for her work on partial differential equations and fluid dynamics. Google celebrated her birthday with a doodle and a YouTube video on her life and achievements.

The Google doodle is in an elliptical shape, possibly paying homage to her work involving linear and quasilinear elliptic equations.

Olga Aleksandrovna Ladyzhenskaya was born in the town of Kologriv in the erstwhile Soviet Union. Her father was a mathematics teacher and is credited with inspiring her love of mathematics.

But Olga's childhood was marred with tragedy.

Her father was labeled "enemy of the people" by the Soviet Union government, and when she was just 15 years old, he was arrested by the interior ministry of Soviet Union and soon killed. Despite her exceptional grades, her family name meant she was denied admission into the Leningrad University, which is the oldest and one of the largest universities in Russia.

But she got a second chance after the death of then Premier of the Soviet Union, Joseph Stalin in 1952. In 1953, Olga Ladyzhenskaya presented her doctoral thesis and was given her degree. She was a student of the famous Soviet mathematician Ivan Petrovsky.

Olga Ladyzhenskaya went on to teach at the Leningrad University and at the Steklov Institute. She continued to stay in Russia even after the Soviet Union collapsed and the country saw a rapid salary deflation for professors.

Olga provided the first rigorous proofs of the convergence of a finite difference method for the Navier-Stokes equations. In 2002, two years before she died, she was awarded the Lomonosov Gold Medal. Olga Ladyzhenskaya was also on the shortlist for potential recipients for the reputed Fields Medal in 1958, but lost out to the German mathematician Klaus Roth and French mathematician Rene Thom.