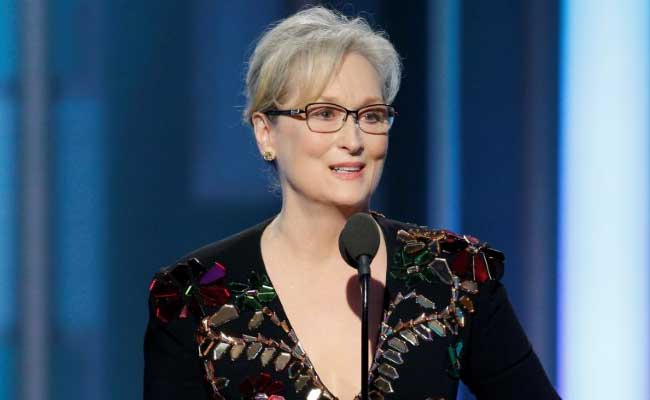 Beverly Hills, California: Three-time Oscar winner Meryl Streep used her Golden Globe acceptance speech to rip into US President-elect Donald Trump for his divisive statements and his imitation of a disabled reporter during his campaign.

Within moments, her six-minute speech was viral online.

"You and all of us in this room, really, belong to the most vilified segments in American society right now. Think about it. Hollywood, foreigners, and the press," the 67-year-old said to her peers after receiving the Cecil B. DeMille lifetime achievement award on Sunday night.

"But who are we? And, you know, what is Hollywood anyway? It's just a bunch of people from other places."

She spoke with less than two weeks to go till the inauguration of Trump, who ran a divisive presidential campaign vilifying Mexicans and calling for a ban on Muslim immigration.

"Hollywood is crawling with outsiders and foreigners. If you kick 'em all out, you'll have nothing to watch but football and mixed martial arts, which are not the arts," she said, holding back tears.

She referred to a 2015 incident at a South Carolina rally when Trump flailed his arms and slurred in an apparent mocking of New York Times reporter Serge Kovaleski, who has a physical disability. Trump later denied that he was imitating the reporter.

"There was one performance this year that stunned me," Streep said, without naming Trump. "It sank its hooks in my heart. Not because it was good. It was that moment when the person asking to sit in the most respected seat in our country imitated a disabled reporter."

Streep added: "It kind of broke my heart when I saw it and I still can't get it out of my head because it wasn't in a movie. It was real life...This instinct to humiliate when it's modeled by someone in the public platform by someone powerful it filters down into everybody's life. Disrespect invites disrespect. Violence incites violence."

Promoted
Listen to the latest songs, only on JioSaavn.com
The audience sat in stunned silence as Streep, known to be the best actress in her generation, used almost the entire speech to criticize Trump's behavior and policies.

There has never been anyone like Meryl Streep. I love her. #GoldenGlobes

"When the powerful use their position to bully others, we all lose" thank you #MerylStreep#GoldenGlobes

There were also some critics

This Meryl Streep speech is why Trump won. And if people in Hollywood don't start recognizing why and how - you will help him get re-elected