Gloria Allred: The Predator's Nightmare, At War For Women

As a deluge of allegations brings down powerful entertainment figures like Bill Cosby and Harvey Weinstein, the 76-year-old criticized for her fondness for the limelight is having something of a moment. 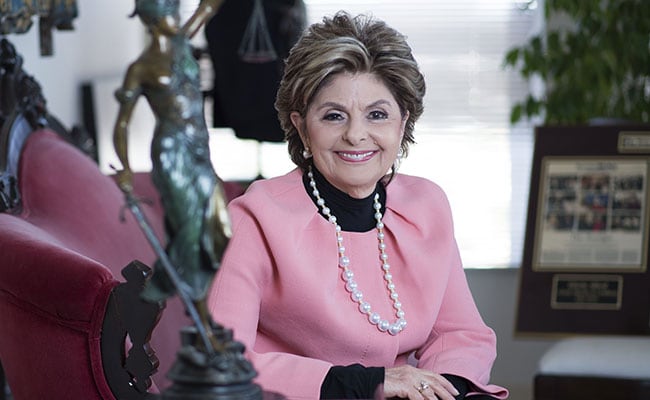 Los Angeles, United States: Arguably America's best known lawyer, revered by clients and feared by the men who prey on them, Gloria Allred has been representing victims of sexual violence for 40 years.

And as a deluge of allegations brings down powerful entertainment figures like Bill Cosby and Harvey Weinstein, the 76-year-old criticized for her fondness for the limelight is having something of a moment.

The #MeToo movement against sexual assault spawned by the Weinstein scandal is making headlines daily -- and Allred finds herself at the peak of her powers, her illustrious career the subject of "Seeing Allred," a documentary released Friday on Netflix.

Impeccably stylish, hair carefully coifed and make up applied with surgical precision, she has been seen on television screens across the world representing high profile clients like the kidnapped heiress Patty Hearst.

She has also advocated for the family of a child accusing Michael Jackson of sexual assault and the loved-ones of murdered Nicole Brown Simpson during the trial of O.J. Simpson.

Her current client list includes a woman who alleges President Donald Trump forcibly kissed her as well as one of the accusers of controversial failed Republican Senate candidate Roy Moore.

"Women have been coming forward before Weinstein and #MeToo, but it was like a wave coming onto the beach and then of course it became a tsunami," Allread told AFP.

"It has now reached into millions of homes all around the world and it's been very empowering to alleged victims."

Allred says the reassertion of female power underway in public life comes as no surprise, although she was taken aback by the sheer number of victims willing to tell their stories.

'Too sexy for Citibank'

"It's a very exciting time because we see women abandoning their fear, finding their voice, reaching out to learn what legal rights they have, and in many cases asserting those rights," she said.

The committed feminist has a record of leading action against men refusing to pay alimony, most notably when she sued Pakistani cricket legend turned politician Imran Khan to force him to recognize his paternity responsibilities.

She has also represented victims of sexual abuse of priests, campaigned for the right to same-sex marriage and advocated for victims of racial discrimination.

A former teacher in the predominantly African American southern Los Angeles district of Watts, Allred became a lawyer in her 30s.

Her modus operandi is the headline-grabbing press conference, which she uses as a weapon to conquer public opinion.

These showpieces often take place in the conference room of her Los Angeles office, her clients reading a statement and breaking down in tears, as she clasps their hand or places a sisterly arm around a shoulder.

"People who are not well known, the typical person, the victim to whom no one would pay attention they deserve to have a voice, respect, to be heard," she says.

Allred's critics charge her with attention-grabbing sensationalism, pointing to the 2010 case when she argued that a banker was discriminated against by male bosses for being "too sexy for Citibank."

"I'm most proud of the clients I represent and their courage, because it's not easy to talk about what they say happened to them. Often it will trigger memories that they have for many years tried to suppress," Allred told AFP.

"They will often have to fight through their tears to talk about it and then to undergo the process of justice."

Those who mock her ego her desk is adorned with her own portraits and her face smiling back from the covers of magazines or say that she is motivated by money get an insouciant shrug.

"When they call me names, it's a message to me that they don't have a good legal argument. It doesn't deter me," she says.

Born in Philadelphia in 1941, Allred was 20 when she had her daughter Lisa Bloom -- also a lawyer, who resigned from a briefly-held controversial position on Weinstein's defense team.

She found herself a single mother after separating from her first husband, who was bipolar, and was married for 19 years to her second husband William Allred, before an acrimonious divorce.

Many Americans casually acquainted with Allred's work will be unaware that her passion is born of her own horrifying personal experience half a century ago, when she was raped while on vacation in Mexico.

The attack resulted in a pregnancy, and the callow 25-year-old had an abortion in secret.

She nearly died and her nurse told her she ought to see the ordeal as a "lesson."

"I do think that my own life experience as a woman is certainly a motivation and a driving force to want to assist other women in the justice system," she said.

"I didn't learn what I know now in college but in the school of hard knocks. I very much believe in what Gandhi said that you must be the change you wish to see in the world."