The complaint accused Germany, France, Brazil, Argentina and Turkey of failing to uphold their obligations under the Convention on the Rights of the Child, signed 30 years ago. 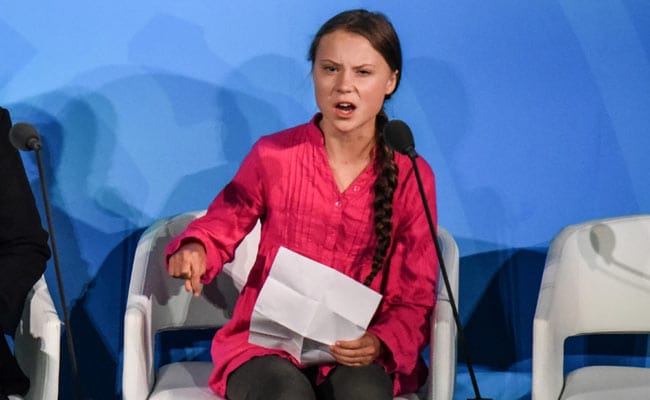 Greta Thunberg and 15 other young activists file complaint at UN

After global street protests demanding action on climate change, Greta Thunberg and 15 other young activists on Monday filed a complaint at the UN against five countries for not doing enough to ward off global warming.

The complaint accused Germany, France, Brazil, Argentina and Turkey of failing to uphold their obligations under the Convention on the Rights of the Child, signed 30 years ago.

The complaint, filed by the 16-year-old Swedish activist and 15 other petitioners from 12 different countries and aged between eight and 17, accused the five countries of violating children's rights by failing to take adequate and timely action against climate change.

It was filed after Thunberg delivered a searing attack on world leaders for their slow response to climate change at a special session kicking off the UN General Assembly in New York.

Every member of the United Nations except the United States has ratified the convention to protect the health and rights of children.

Monday's complaint focuses on a little-known "optional protocol" that came into effect in 2014 that allows children to file a complaint to the Committee on the Rights of the Child if they feel their rights are being denied.

The committee is then meant to investigate the charges before making recommendations to the countries concerned on how they can fix the issue.

The 16 young people were backed by the legal firm Hausfeld LLP and Earthjustice, an environmental law group.

Lawyer Michael Hausfeld said that while the committee's recommendations are not legally binding, the 44 countries that ratified the protocol pledged to respect them. He said he hoped the recommendations would be made in the coming 12 months.

The five countries named in the complaint are among the 44 that ratified the protocol and are also among the top global polluters, as well as being members of the G20 group of leading global economies.

The largest polluters in the world -- the United States, China and India -- did not ratify the protocol.

Countries like France and Germany may have recently begun working to tackle greenhouse gas emissions, but have also played a large role historically in polluting the atmosphere, the law firm argued.