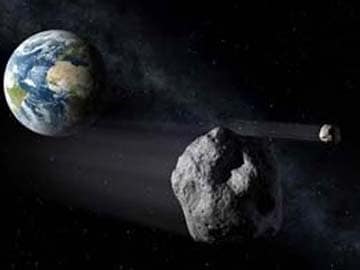 Washington: Using a computer simulation model based on a moon crater, planetary scientists have revealed that early Earth is likely to have been hit by giant asteroids capable of killing off life and completely resurfacing the planet.

Impact scars on Mars, Moon and Mercury suggest that the entire inner solar system was bombarded by asteroids during that time.

"But melting and reforming of Earth's crust has wiped clean any sign of early impacts, making it difficult to work out how often asteroids hit or how big they were and what their consequences were for the planet's geology and life," said Simone Marchi, a planetary scientist at Southwest Research Institute in Boulder, Colorado.

The model suggests that the biggest asteroids to hit Earth would have been as large as 3,000 km across.

Between one and four would have been 1,000 km wide or larger, it predicts, with a total of three to seven exceeding 500 km in width.

The most recent of these would have hit around 4.2-4.3 billion years ago.

The team estimated the total volume of asteroids that hit Earth and the Moon using measurements of the abundance of elements such as gold and osmium in their crusts.

If these elements had been present when the Moon split violently from Earth 4.5 billion years ago, they would have sunk to the bodies' cores - so any such elements in the crusts and mantles must have been delivered by asteroid impacts since then.

"This paper shows the way for what will probably become a new thread in research on the environment and geology of the early Earth," said Henry Melosh, a geophysicist at Purdue University in West Lafayette, Indiana.

A 10-km wide asteroid was enough to kill the dinosaurs and studies show that one 500 km across would vaporise all of the planet's oceans.

"At 1,000 km, the effects would be so wide the planet would probably be completely resurfaced with material from the mantle," Marchi said.

This would mean "episodes of complete sterilsation of Earth", he added.

Promoted
Listen to the latest songs, only on JioSaavn.com
"Statistically at least, it would have been difficult for life to thrive before 4.3 billion or 4.2 billion years ago, although extremely heat-resistant bacteria could have survived," he said.

The earliest hint of life on Earth is 3.8 billion years old.