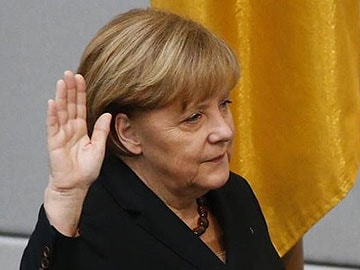 German Chancellor Angela Merkel is sworn-in during the meeting of Germany's lower house of parliament.

Berlin: Angela Merkel was elected to a third term as chancellor in a vote in the German lower house of parliament on Tuesday, paving the way for her new government to formally take power after months of coalition talks.

Her right-left government, which includes the rival Social Democrats (SPD), faces a host of challenges, including seeing through Merkel's costly switch from nuclear to renewable energy and bedding down European reforms aimed at shielding the bloc from future crises.

On Wednesday morning, she will address parliament on EU issues before heading to Paris for talks with French President Francois Hollande.

Merkel, 59, will then attend an EU summit in Brussels at which leaders are under pressure to clinch a deal on the bloc's ambitious "banking union" project.

Asked later in a television interview what her new term would mean for struggling euro states like Greece, Portugal and Spain, Merkel stuck to the hard line she has become known for in recent years.

"Those who know me know that I want improvements in competitiveness, I want solid finances and above all a situation where the euro is stable, in other words investors in the currency have confidence that they will get their money back one day," she told public station ARD. "Without growth this won't work. But growth can't mean simply more public spending."

Merkel joins fellow conservatives Konrad Adenauer and Helmut Kohl as the only post-war chancellors to have won three terms.

Her conservatives scored their best result in more than two decades in the election on September 22 but were forced into lengthy coalition talks with the rival Social Democrats (SPD), whose members only approved the deal at the weekend.

The vote in the Bundestag was a formality as the ruling parties hold around four-fifths of the seats. A total of 462 lawmakers backed Merkel for chancellor, with 150 voting against and nine abstaining.

Later, members of her cabinet, six of whom are Social Democrats (SPD), were sworn in.

The biggest surprise in Merkel's cabinet was her choice of conservative Ursula von der Leyen as defence minister, which has fuelled speculation the spirited mother-of-seven could eventually succeed the chancellor.

President Joachim Gauck urged the government to act responsibly with its overwhelming parliamentary majority and said Germany should continue to build a "union of Europeans" which stood for peace and freedom.

In the new year, Merkel's focus is expecgted to shift to domestic issues.

Promoted
Listen to the latest songs, only on JioSaavn.com
One priority for the "grand coalition" will be a reform of Germany's complex renewable energy law, blamed for soaring electricity costs. The government aims to have an agreement in place by Easter.

By the summer, reforms of the pension system - more generous payouts for mothers and exceptions to the 67-year retirement age - must be pushed through, and progress made on introducing a minimum wage of 8.50 euros per hour.
© Thomson Reuters 2013