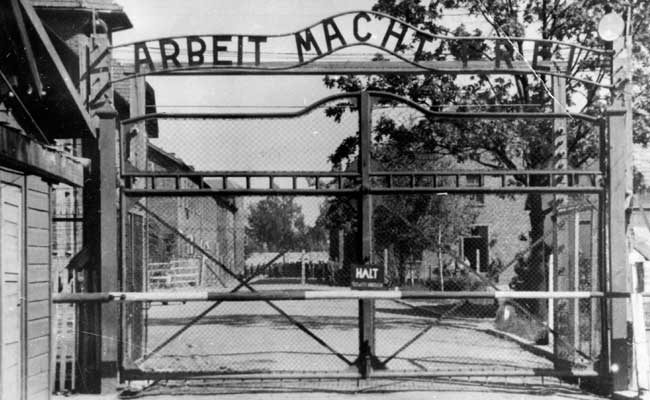 Berlin: A former Nazi death camp officer dubbed the "bookkeeper of Auschwitz" goes on trial in Germany Tuesday, with almost 70 Holocaust survivors and victims' relatives expected in the courtroom.

Oskar Groening, 93, will be tried on "accessory to murder" charges in 300,000 cases of deported Hungarian Jews who were sent to the gas chambers, and faces up to 15 years jail.

Given the advanced age of most German war crimes suspects, Groening is expected to be among the last to face justice, 70 years after the liberation of the concentration camps at the end of World War II.

Media interest is set to be intense in the trial of the frail widower in Lueneburg near the northern city of Hamburg, where Auschwitz survivors will appear as witnesses or co-plaintiffs.

"What I hope to hear is that aiding in the killing machinery... is going to be considered as a crime," said Auschwitz survivor Hedy Bohm from Toronto, who is due to attend. "So then no one in the future can do what he did and claim innocence."

Prosecutors charge Groening served as a bookkeeper who sorted and counted the money taken from those killed, accounting for cash in different currencies from across Europe.

He also performed "ramp duty", guarding the luggage stolen from deportees as they arrived by rail at the extermination and forced labour camp in Nazi-occupied Poland, they say.

Groening, unlike most former Nazis, has spoken at length in a string of media interviews about what he did and saw at Auschwitz, although he claims he is not guilty of harming any inmates.

Prosecutors say that by serving at the camp, he played a role in the mass murder that claimed over a million lives, building their case around 300,000 deaths from May to July 1944.

Defence lawyer Hans Holtermann has said Groening will speak shortly after the 0730 GMT opening of the trial, which is currently scheduled to run until July 29.

Groening has said he first opened up about his past in 1985, when a member of his stamp collectors' club handed him a book written by a Holocaust denier.

He returned it with the message "I saw everything. The gas chambers, the cremations, the selection process... I was there."

He went on to write a memoir for his family, shared his recollections with the German press and appeared in a BBC documentary.

During the war, Groening has said, he saw the mass extermination as "a tool of waging war. A war with advanced methods."

He has recounted acts of barbarism he witnessed, including when an SS guard on the railway ramp killed a baby.

"The crying had bothered him," Groening remembered. "He smashed the baby's head against the iron side of a truck until it was silent."

Groening has insisted that he is personally not guilty of any murders, describing his role as "a small cog" in the killing machine.

"If you can describe this as guilt, then I am guilty," he has said. "Legally speaking I am innocent."

The defendant has previously been cleared by German courts, but the legal basis for prosecuting ex-Nazis changed in 2011 with the trial of former death camp guard John Demjanjuk.

While previously courts had punished defendants for individual atrocities, Demjanjuk was sentenced to jail on the basis of having served at a camp, Sobibor, also in occupied Poland.

Judges accepted that Demjanjuk, a former Ukrainian citizen and later Ohio auto worker, was an accessory to the murder of almost 28,000 Dutch Jews.

The challenge in the latest trial will be "to establish a legal standard which is also moral and political: what is allowed and what is forbidden?" said historian Andreas Sander of the Berlin Nazi museum Topography of Terror.

Christoph Heubner, vice president of the International Auschwitz Committee, said the new trial was important because "many perpetrators never saw the inside of a courtroom and died without having been confronted with their guilt".

"This is an enduring scandal that has caused great indignation among the survivors."

Some 1.1 million people, most of them European Jews, perished between 1940 and 1945 in the Auschwitz-Birkenau camp before it was liberated by Soviet forces.
Comments
German CourtBookkeeper of AuschwitzNazi death campHolocaust survivorsOskar GroeningInternational Auschwitz Committee