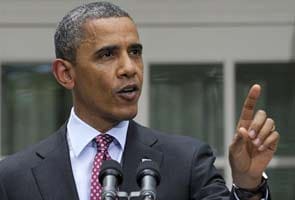 Washington: US President Barack Obama on Friday reiterated US support for Israel's right to defend itself during a call with Israeli Prime Minister Benjamin Netanyahu about the conflict in Gaza.

"The president reiterated US support for Israel's right to defend itself, and expressed regret over the loss of Israeli and Palestinian civilian lives," the White House said in a summary of the conversation.

Netanyahu, who initiated the call, expressed his deep appreciation for US investment in the Iron Dome rocket and mortar defense system, "which has effectively defeated hundreds of incoming rockets from Gaza and saved countless Israeli lives," according to the readout.

The two leaders also "discussed options for de-escalating the situation." However, the White House statement did not provide any details.

Obama on Friday also spoke with Egyptian President Mohamed Morsi, commending his country's efforts to de-escalate the situation and expressing his hope that these efforts would be successful, the White House said.

"The president expressed regret for the loss of Israeli and Palestinian civilian lives, and underscored the importance of resolving the situation as quickly as possible to restore stability and prevent further loss of life," said a summary of that call, which was initiated by Obama.

Meanwhile, US Defense Secretary Leon Panetta also spoke to his Israeli counterpart Ehud Barak by phone Friday and received an "update on the situation" in Gaza, a senior defense official told reporters traveling with the Pentagon chief.

The two men, in their second phone conversation this week, discussed "prospects for de-escalation," the military official told AFP, speaking on condition of anonymity.

The calls came as Gaza militants fired rockets at both Jerusalem and Tel Aviv on Friday, aiming for Israel's political and commercial hearts and prompting the call-up of thousands more reservists in readiness for a potential ground war.

The Israeli military said it had sealed off all the main roads around the Gaza border, declaring the area a closed military zone. The move is the latest sign that Israel's patience with the rocket fire was at an end, and it was poised to launch its first ground offensive on the territory since 2008-2009.

Promoted
Listen to the latest songs, only on JioSaavn.com
Neither rocket caused casualties or damage, police said, but they sowed panic in both of the Jewish state's main population centers, setting off warning sirens and sending people scurrying to shelters.

The two rockets were the farthest Gaza militants have ever fired into Israel, exceeding even the 60 kilometers (36 miles) achieved Thursday by a rocket that hit the sea off Jaffa, just south of Tel Aviv.