Celebrating Pride: Google's Doodle encompasses pride history in the month of June, which has come to be celebrated by the LGBTQI+ community as Pride Month. 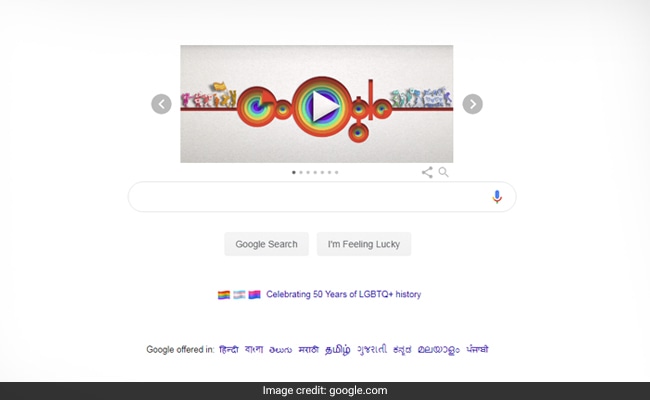 Today's Google Doodle commemorates the fiftieth anniversary of the celebration and acceptance of gay, lesbian, transgender and bisexual identities. Google's Doodle encompasses pride history in the month of June, which has come to be celebrated by the LGBTQI+ community as Pride Month. The doodle created by Doodler Nate Swinehart celebrates, honours and showcases the celebration and liberation of the entire LGBTQI+ community as well as how Pride History shaped his own journey. The Google Doodle, as told by doodler Nate Swinehart, showcases early pride activism, "on Christopher Street in New York City, to the worldwide celebrations of today."

"In celebrating 50 years of Pride, my coworker Cynthia Cheng first had the idea to depict the parade itself and show it growing in size and momentum across the decades," says Nate Swinehart, adding that the Google Doodle allowed him to explore many different styles that "could fully capture the feeling of a growing parade and relate to all who are a part of it."

He goes on to describe the extremely important role that colour, with its many hues and vibrancy, played on not just the creation of the Google Doodle, but also the larger positive portrayal of LGBTQI+ activism.

"Color also played a huge part in the concepting, as I wanted to depict the vibrance and energy of the community. While everything begins with shades of grey, we first see the rainbow through a community space. Color then begins to spread, first in individual people, then to the city around them, until it finally overtakes the entire composition. I also wanted the progression of color to be meaningful, beginning with the initial pink triangle that was reclaimed by the community as a symbol of liberation. From there, we go backwards through the rainbow from purple to red, until we see all the colors come together harmoniously in the final image," he says on the Google Doodle website.

Nate, who also happens to be a Google employee, opened up about what it felt like to open the Google homepage before he had joined the company in 2014. "I was completely blown away. Looking at the front page of Google, I was filled with hope and a feeling of belonging. That moment was a large part of why I wanted to become a Doodler," he said, on seeing a Doodle celebrating the Winter Olympics, which depicted the colours of the Pride flag.

It was at this moment that Nate decided he had to "make a positive impact on the world".