Despite Jamal Khashoggi Case, US Firms Turn Up At 'Davos In The Desert'

Davos In The Desert: American executives said business ties between the United States and Saudi Arabia are far too valuable to be disrupted by it. 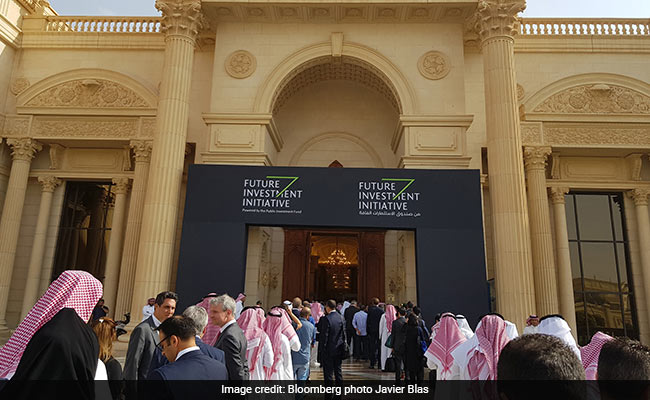 Future Investment Initiative 2018: Participants arrive for the opening day at the Ritz Carlton in Riyadh

Gathered under grand domes and crystal chandeliers for a glitzy investment forum nicknamed "Davos in the Desert," business leaders on Tuesday called the death of Saudi journalist Jamal Khashoggi terrible and sad but said it shouldn't derail their dealmaking or U.S.-Saudi relations.

They knew that Saudi agents killed Khashoggi three weeks ago at the Saudi Consulate in Istanbul. And they knew that their host, Crown Prince Mohammed bin Salman, was widely suspected of being involved, despite vehement official denials.

Marquee-name sponsors and chief executives, including Jamie Dimon of JPMorgan Chase, Stephen Schwarzman of Blackstone and AOL founder Steve Case, had pulled out in protest. The conference website was crippled Monday by hackers angry about Khashoggi's killing.

But thousands still came, in a wave of black Mercedes-Benzes and Chevrolet Suburbans, through the conference center's enormous stone archways and past elegant fountains, with security agents manning a machine gun mounted atop a Dodge Ram pickup. And when Mohammed arrived, they gave him a standing ovation.

American executives interviewed at the conference said they were jolted by Khashoggi's gruesome killing. But they also said business ties between the United States and Saudi Arabia are far too valuable to be disrupted by it.

A U.S. executive who advises sovereign wealth funds said that although the Khashoggi case was "shocking," ultimately it would be only a "hiccup" in the business world.

"You support your friends in good times and bad," the executive said. "The trajectory [in Saudi Arabia] is toward more openness and transparency, but there are going to be bumps in the road." He, like others, spoke on the condition of anonymity because of the sensitivity of the subject.

Todd Albert Nims, a Texan who lives in Riyadh and runs a filmmaking company, said he was born in Saudi Arabia, the son of an oil company executive, and has spent "half my life" in the country. 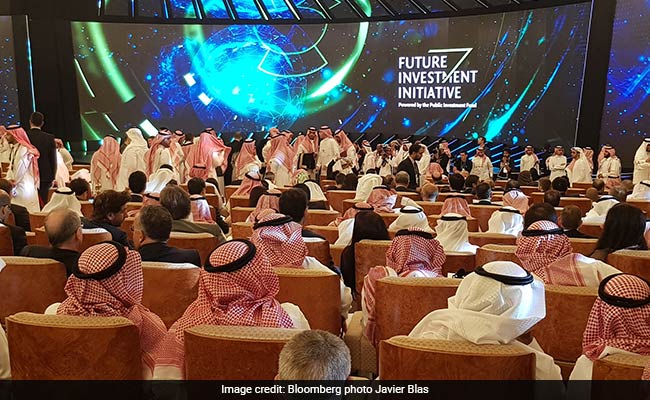 Future Investment Initiative: The conference was held under the sandstone domes of the King Abdul Aziz International Conference Center, in a vast main hall where waiting on every seat was a large hardcover book titled, "A Blue Print for the Twenty Second Century"

Nims said the killing of Khashoggi, who contributed opinion columns to The Washington Post, was "horrifying" but should not damage U.S. relations with Saudi Arabia.

"It's not who these people are," he said. "Saudi Arabia has been a friend. They have been a huge stabilizer in this region. We shouldn't trash it all over one thing. It's like a marriage. This is one day in the life of a marriage."

President Donald Trump has said Khashoggi's killing must be investigated, but he has stopped short of criticizing Mohammed, who has close ties to Jared Kushner, Trump's adviser and son-in-law. Trump has said he does not want the incident to interfere with billions of dollars in U.S. arms sales to Saudi Arabia.

Todd Albert Nims, a Texan who lives in Riyadh, said the killing of Khashoggi was "horrifying" but should not damage U.S. relations with Saudi Arabia. "It's not who these people are," he said. "Saudi Arabia has been a friend. They have been a huge stabilizer in this region. We shouldn't trash it all over one thing. It's like a marriage. This is one day in the life of a marriage."

Reflecting Trump's ambivalence, Treasury Secretary Steven Mnuchin canceled his scheduled appearance at the conference but came to Riyadh anyway and met with Mohammed on Monday.

On Tuesday, Mohammed posed for selfies with delegates, and he sat with Jordan's King Abdullah during a panel discussion.

The event, officially called the Future Investment Initiative, an annual gathering that started last year, was a feast of gaudy Saudi excess.

It was held under the sandstone domes of the King Abdul Aziz International Conference Center, in a vast main hall where waiting on every seat was a large hardcover book titled, "A Blue Print for the Twenty Second Century."

Saudi business executive Lubna Olayan on Khashoggi's death: "the terrible acts reported in recent weeks are alien to our culture and our DNA."#FII2018pic.twitter.com/Xl3BCNdlsA

As the lights went down in the packed hall, an actor on stage danced with a lighted drone flying above him. A voice boomed from massive speakers, mentioning Marie Curie, Thomas Edison, the Wright Brothers and Mark Zuckerberg: "dreamers."

"The next generation of game changers is here, in this room," the voice said to the vast crowd.

The opening was filled with loud music, laser lights and video on big screens.

But, for a moment, the great hall was also filled with Jamal Khashoggi.

Lubna Olayan, an influential Saudi business leader, stepped to the stage to moderate the first panel discussion. But first, she told the audience that she had known the journalist and said, "May he rest in peace."

"I want to tell all our foreign guests, for whose presence with us this morning we are very grateful, that the terrible acts reported in recent weeks are alien to our culture and our DNA," she said.

"And I'm confident that with the support of the government, concerned authorities and leadership, the truth will emerge. I am sure that we will grow and emerge stronger as a result of the crisis of the last few weeks." 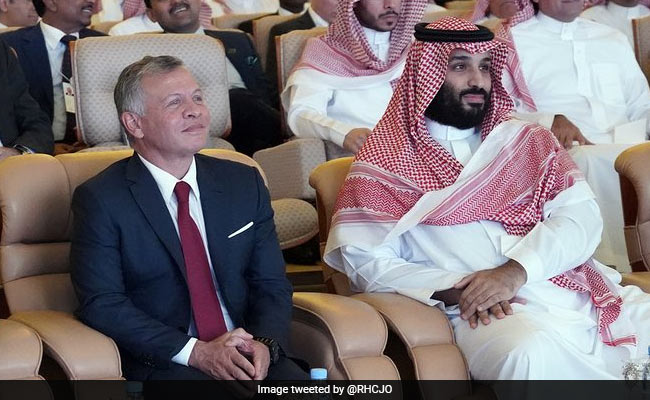 When she finished, a tentative round of applause rippled through the crowd, as though people weren't sure whether it was OK to clap about a murder investigation. But then it was down to business, and she began moderating a panel discussion about sovereign wealth funds.

Many people seemed just as happy to mingle in the cavernous halls outside, amid long tables filled with fresh juices, coffee and hillocks of pastries.

"Last year, there was a real air of intensity and emotion, and the excitement was wall to wall. But this year has been a little suppressed," said Tarik Solomon, an official with the American Business Group of Riyadh.

Still, he said, there were "lots of executives here, and deals are still being cut."

Many people said that although some chief executives had dropped out, most had sent lower-ranking executives. 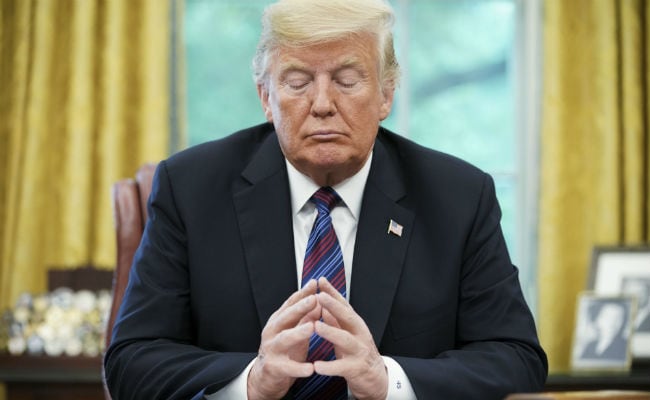 President Donald Trump has said Jamal Khashoggi's killing must be investigated, but he has stopped short of criticizing Mohammed bin Salman, who has close ties to Jared Kushner, Trump's adviser and son-in-law (File Photo)

The Americans were more scarce.

"You're the first American I've seen!" a U.S. executive said when approached by a Post reporter.

The Khashoggi case "is a Saudi matter at the end of the day," said a different American, a financial services executive from the East Coast.

"It's unfortunate, obviously, and we hope the regime will listen and change," he said. "But they do things their own way here."

He also said he thought the Khashoggi matter was small compared with the huge amounts of investment and trade between the two nations. He said it would not be a long-term problem.

"Knowing how the news works, by next Wednesday, it will be something else," he said.

Nims, the film producer, also said he worried that Russia and China would be the beneficiaries of any American reluctance to do business in Saudi Arabia.

"As an American, it concerns me that I see Russia and China jumping on this opportunity as Americans back out," he said.

Mark Garber, the Russian chairman of GHP Group, a Moscow-based investment firm, smiled when asked whether Russia and China were ready to fill the void in Saudi Arabia if American firms leave.

"I think there are real opportunities here. A lot of Americans have pulled away," he said.

However, later on the first day of the three-day conference, organizers announced that Saudi Aramco, a state-owned oil giant, had signed 15 memorandums of understanding worth $34 billion - six of them with U.S. companies. They were Schlumberger; Halliburton; oil-field-service companies Baker Hughes and National Oilwell Varco (NOV); Flexsteel, a pipeline company; and Air Products and Chemicals Inc., which sells gases and chemicals.

(Except for the headline, this story has not been edited by NDTV staff and is published from a syndicated feed.)
Comments
DavosDesert2018Future Investment InitiativeJamal Khashoggi