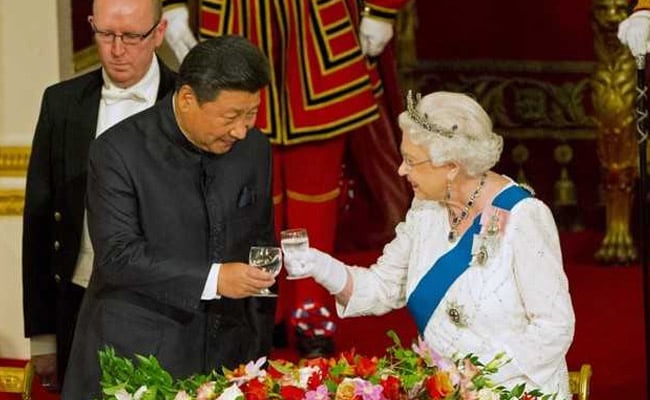 Protesters are planning demonstrations when U.S. President Donald Trump arrives in Britain next week for talks with Prime Minister Theresa May and a meeting with Queen Elizabeth.

Some lawmakers who are opposed to Trump's trip have said the monarch should not have to meet the president because of his policies.

Here are details of some of the queen's previous meetings with world leaders which provoked controversy or protests.

Small demonstrations about China's human rights record were held when the Xi came on a state visit, including a pro-democracy activist who was arrested for stepping in front of his motorcade.

The protesters were drowned out by thousands of China supporters as Xi rode in a carriage with the queen to Buckingham Palace.

The following year, the queen was caught on camera saying Chinese officials had been "very rude".

Elizabeth's eldest son and heir Prince Charles skipped the state banquet for Xi. At the handover of the British colony of Hong Kong to China in 1997 he had described some Chinese officials in a journal that was leaked to the media as "appalling old waxworks".

The queen's shaking of hands with former Irish Republican Army (IRA) guerrilla commander Martin McGuinness was one of the most symbolic of her reign, drawing a line under 30 years of conflict in Northern Ireland.

The meeting took place 14 years after the IRA ended its war against British rule in the province. There was opposition from some dissident Irish militants who regarded McGuinness as a traitor and from relatives of IRA victims who said the queen should meet a terrorist.

Lord Louis Mountbatten, who was her husband Philip's uncle, was killed by the IRA in 1979 with three others, including his 14-year-old grandson, when his boat was blown up during a holiday in Ireland.

Protesters shouted "murderers", "torturers", and "shame on you" when King Abdullah was driven in a gilded horse-drawn coach through central London during his state visit in 2007. The Liberal Democrat Party, which joined a coalition government in 2010, boycotted official events in protest at the Saudi human rights record.

The two monarchs themselves spoke warmly about each other's countries at a Buckingham Palace banquet. "The relationship between our two kingdoms is one of mutual benefit, learning and understanding," Elizabeth said.

Anger over the invasion of Iraq eight months earlier meant that Bush faced demonstrations from about 100,000 people when he came to Britain for a state visit in 2003. More than 5,000 police officers were on the streets.

The security concerns meant Bush himself missed out on an open-carriage parade along the Mall by Buckingham Palace, where hundreds of protesters massed.

"Like all special friends, we can talk frankly and we can disagree from time to time - even sometimes fall out over a particular issue," Elizabeth said at a banquet for Bush.

"But the depth and breadth of our partnership means that there is always so much we are doing together, at all levels, that disputes can be quickly overcome and forgiven."

Before relations between Russia and Britain dived to post-Cold War lows, Putin was feted with a state visit as the British government tried to expand trade and investment.

"Mr President, it is I believe a sign of genuine friendship that we are able to have disagreements but remain firm partners," the queen told Putin.

While not widespread, the trip did attract protests from human rights groups who criticised Putin for Russian military action in Chechnya.

Like Trump, Syria's Bashar al-Assad did not pay a state visit to Britain but did meet the queen at Buckingham Palace during a 2002 trip to London where he had worked as an eye doctor.

The visit was condemned by Israeli politicians and Jewish groups because of what they said was Assad's support for Palestinian militant groups.

Mugabe, who ruled Zimbabwe from its independence from Britain in 1980 until last year, had a four-day state visit.

"Through your personal commitment to economic reform...your economy seems to be well on the way to recovery and sustainable growth," the queen said.

Mugabe presided over the forced takeover of white-owned farms at the end of the century which helped ruin one of Africa's most dynamic economies, while his wife Grace was nicknamed by critics as "Gucci Grace" for her reputed fondness for luxury shopping.

In 2008, the queen stripped him of an honorary knighthood granted during his visit 14 years before.

British former prisoners of war turned their backs on the Emperor when he and the queen drove past in a carriage on their way to Buckingham Palace at the formal start of his state visit.

There was also booing, whistling and jeering from the veterans who wanted a full apology and further compensation for World War Two suffering.

The cool reception for Akihito echoed similar protests that greeted his father Hirohito in 1971 when silent crowds lined the emperor's route to show their disapproval.

The queen ordered guest rooms to be stripped of valuables before a state visit in 1978 by Romanian dictator Nicolae Ceausescu and his wife, according to a later BBC documentary.

The Ceausescus were said to have removed thousands of dollars' worth of ornaments and fittings from rooms during an official stay in Paris beforehand.

Media reports say the monarch hid behind a bush to avoid the Ceausescus after spotting them as she walked her dogs in the palace grounds. The queen reportedly later described the visit as the worst three days of her life.

Ceausescu had been invited partly because he had been perceived as taking a less subservient line towards Moscow at a time when the Cold War was at its height.

After he was deposed in 1989, the queen also stripped Ceausescu of an honorary knighthood bestowed upon him during the trip.