Members of The Republicans (LR) in the primary run-off vote chose Valerie Pecresse, 54, who will be its first-ever female presidential candidate. 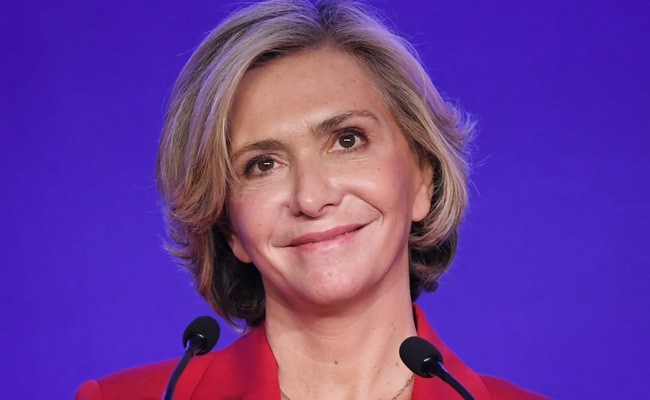 Valerie Pecresse is a former minister in the presidency of Nicolas Sarkozy.

France's conservative party on Saturday chose the moderate chief of the Paris region Valerie Pecresse to challenge President Emmanuel Macron next year, a pick that will likely have a major influence on the shape of the campaign.

Members of The Republicans (LR) in the primary run-off vote chose Pecresse, 54, who will be its first-ever female presidential candidate, over hardliner Eric Ciotti, party leader Christian Jacob announced.

Both had made the run-off after the first round of voting earlier this week upended expectations.

The favourites ex-minister Xavier Bertrand and former EU Brexit negotiator Michel Barnier were both knocked out and went on to back Pecresse.

"The party of (France's post-war leader) General (Charles) de Gaulle... our political family, will have a female candidate in the presidential election. I am thinking of all the women of France today. I will give everything to triumph," she said after the result was announced.

Pecresse, a former minister in the presidency of Nicolas Sarkozy, won almost 61 percent of the vote among party members while Ciotti won just over 39 percent, Jacob said. Ciotti accepted defeat and immediately pledged to support Pecresse.

The result is being keenly watched by Macron's office.

While all opinion polls have predicted centrist Macron should win the election, the emergence of a strong candidate on the traditional right who gains momentum during the campaign would be a major factor.

The campaign has so far been waged on the right, with Macron's government tacking rightwards over the last months with tough rhetoric on immigration and preserving France's secular system.

The Republicans failed to make the run-off in 2017, after its candidate Francois Fillon was felled by a graft scandal.

But the party, out of power since 2012, makes much of its status as the inheritor of the presidencies of Sarkozy and Jacques Chirac as well as de Gaulle.

"The Republican right-wing is back. It will fight with implacable will. France cannot wait any more," Pecresse said, promising to make France "respected in the world".

Striking the tone for a campaign fought on key issues of security and immigration, she added: "I understand the anger of a people who feel powerless against violence, Islamist separatism and uncontrolled immigration."

"I will not have a wavering hand against the enemies of the Republic," she added.

Some critics had scorned Pecresse's chances, saying she is too similar to Macron and jibing that she would make a good fit as his prime minister.

But in her speech, she sought to create distance from Macron, saying she would not be a "zig-zag president... who tells everyone what they want to hear. Between the outgoing president and me there is not just a difference in politics, we are different in nature."

The managing director for Europe of risk analysis group Eurasia Group, Mujtaba Rahman, argued on Twitter that "if she (Pecresse) can make the runoff (she) will be a formidable opponent for Emmanuel Macron".

The announcement of the Republicans candidate means that the main contours for the April 2022 election are largely set.

Macron has yet to declare but is widely expected to seek re-election. Analysts believe he may wait several more weeks before showing his hand to stay above the fray of day-to-day politics.

His main rival in the 2017 election, far-right leader Marine Le Pen, is standing again. Far-right pundit Eric Zemmour's declaration of his candidacy is a wild card that could yet have a major impact or simply fizzle out.

Zemmour is due to hold his first official campaign rally on Sunday.

The left remains mired in disunity and communication problems, with the campaigns of the Socialist candidate, Paris mayor Anne Hidalgo, and Green candidate Yannick Jadot failing to make an impact. Both risk being outpolled by far-left leader Jean-Luc Melenchon.

Taking aim at Le Pen and Zemmour, Pecresse said: "You do not need to be an extremist to go on the offensive. You do not have to be insulting to convince.

"Unlike the extremists, we will turn the page on Macron but without tearing up the pages of French history."