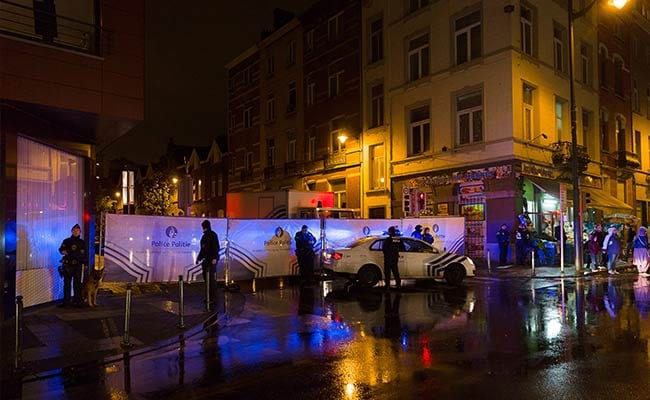 Police cordon off a street during a raid in connection with the Paris attacks in Brussels' Molenbeek district on November 14, 2015. Initial investigations prove that Brussels was a major base of operations for the attacks. (AFP photo)

Paris: European authorities staged an international manhunt on Sunday for a 26-year-old "dangerous individual," one of three brothers involved in the deadly attacks on Paris, even as an image took shape of a larger network of terrorists that could involve as many as 20 plotters.

At least eight assailants in three death squads are thought to have directly carried out Friday's assault, which is being dubbed France's 9/11. Six detonated their suicide belts. Police shot and killed one. French police on Sunday issued an urgent alert and released a photo of an eighth suspect: the 5-foot-7-inch Salah Abdeslam, a Belgian-born French national.

The manhunt came as France detained seven people for questioning and Belgian officials detained seven more in connection with the siege that killed at least 132 people. The international dragnet and investigation now stretch from the Aegean Sea to the teeming Paris suburbs. At the same time, France responded to an act of terrorism it blamed on the Islamic State with airstrikes on the group's Syrian stronghold, the city of Raqqa. 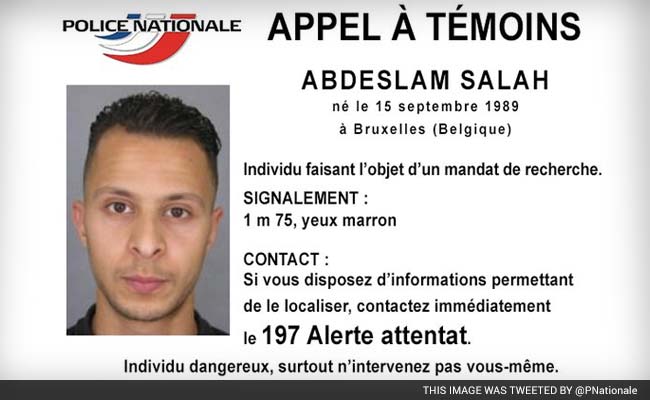 French authorities said they were seeking Salah Abdeslam, 26, and described him as dangerous.

Yet Europeans and their governments were confronting a chilling reality at home. A rogues' gallery of homegrown terrorists with links to Islamist groups has become large enough - and is acting stealthily enough - to make tracking them increasingly difficult for the region's intelligence agencies.

A senior official familiar with the investigation said authorities suspected that as many as 20 people in Europe had been involved in planning, supporting and executing the attack. Just as in January, when two brothers, Said and Cherif Kouachi, staged a bloody siege in Paris, some of the attackers this time were also related. Brahim Abdeslam, 31, blew himself up Friday night inside a busy cafe. His 26-year-old brother, Salah, who allegedly rented a car that was used in one of the attacks, is on the run. A third unnamed brother was apprehended in Belgium.

It became evident, in fact, that Brussels was a major base of operations for the Paris attacks, after French police seized a car rented in Belgium and then uncovered a fortuitous clue: a discarded parking ticket from the Brussels suburb of Molenbeek, a district known as a breeding ground for jihadists.

At least two of the eight known attackers had spent time in Syria, according to two European intelligence officials, who like many interviewed for this article spoke on the condition of anonymity to discuss the ongoing investigation. One of them, Bilal Hadfi, a 20-year-old French national, was known to have returned from the Middle East to Belgium. He then disappeared from the radar of the Belgian security services.

This secular city, consecrated to personal liberties, found itself plunged into a new normal of tension. Police found a car with Kalashnikovs inside in the eastern suburb of Montreuil. On Wednesday, President Francois Hollande will present a bill to the National Assembly calling for a three-month state of emergency - a move granting exceptional police powers to restrict freedom of movement and gatherings at public places.

On Sunday night, the sound of what may have been a firecracker, or a light fixture blowing a circuit breaker at a restaurant near the Place de la Republique, where a vigil was taking place, ignited an extraordinary panic. People stampeded out of restaurants, bars and stores across a two-mile-wide sector of the city as false warnings of gunshots erupted on Twitter. Some dived into news vans. Hotels turned off their lights as employees huddled behind chairs. One woman flung herself into the Canal St. Martin.

"Suddenly people were running and screaming everywhere, going in every direction," said Omar Zahiri, a 50-year-old lawyer attending the vigil. "I said, 'Stop running like a crazy person, calm down.' But they didn't. They kept running."

An incomplete picture of the perpetrators began to emerge. A Syrian passport was found at the stadium where three suicide bombers blew themselves up; it may have belonged to one of them. A senior European security official said the name in the passport was Ahmad Almohammad. According to the passport, he was 25 and was born in Idlib, Syria.

Officials have not conclusively connected the document to any of the bombers. But Greek authorities, following through on a request from the French, traced the Syrian passport to a refugee who arrived on the Aegean island of Leros on Oct. 3 with 198 other people on a migrant boat. The possible link was enough to ignite fresh calls by some to end the huge flow of refugees pouring into Europe.

At a Group of 20 summit in Antalya, Turkey, European Commission President Jean-Claude Juncker urged world leaders not to treat asylum seekers as terrorists in the wake of the Paris attacks. The people who organized and carried out the attacks "are exactly those who the refugees are fleeing," he told reporters, adding that "there is no need to revise the European Union's entire refugee policy."

Other assailants, however, appeared to fit an emerging pattern among Europe's homegrown extremists - petty criminals who were radicalized and became far more religious than their parents.

A case in point is Ismael Omar Mostefai, a 29-year-old French national who blew himself up after gunning down victims alongside two other suicide bombers at a Paris music hall. He had a criminal record, French officials said, and was picked up for eight minor offenses between 2004 and 2010, including driving without a license.

In 2010, however, Mostefai came on the radar screen of French intelligence because of his association with radical Islamists at a mosque in Luce, near Chartres, a city southwest of Paris. The mosque is a modest, wooden-shuttered building surrounded by wrought-iron railings. Its leaders were bewildered to find themselves in the limelight Sunday. They called a news conference to deny any connection to extremism. The current administration, they said, took over in 2013 - after Mostefai had left the area - and they said no one recalled ever seeing him there.

Mostefai is thought to have traveled to Syria in the winter of 2013, a French police official familiar with the case said. "That is when we lost track of him," the official said.

During his youth, Mostefai lived in a middle-class, predominantly Arab neighborhood in the Paris suburb of Courcouronne. Kamel Ousti, 53, a neighbor and family friend, said Mostefai grew up in a modest apartment on Rue Pont Amar, with three brothers; two sisters; a father, who was a deliveryman of Algerian descent; and a mother who was a Portuguese convert to Islam.

When Mostefai was 13, the family received an eviction notice because of his criminal tendencies. "Ismael was kind of a troublemaker, he used to steal things, like mobile phones," Ousti said. Ousti recalled one traumatic event in the family's history. During a trip to Algeria, in 2000, Ousti said they went to the beach, where Mostefai's brother-in-law and two nephews drowned in the surf.

The family eventually moved to Chartres, where residents today recall his family as religious but not extremely so. Mostefai's mother wore a headscarf, but his sisters did not.

Ousti last saw Mostefai four years ago. "He was the kind of kid who wouldn't talk that much. If you ask me, the little lamb turned into a monster."

Mostefai's brother, who surrendered for questioning in a southeastern suburb of Paris, told the Agence France-Presse news service that he had broken off all ties with his brother years ago. The 34-year-old man, who was not identified, said Mostefai had moved back to Algeria with his young daughter. He said he was shocked to learn that his brother was involved in the attacks.

French SWAT teams searched the brother's home and that of Mostefai's father, outside Paris, for three hours Saturday night, according to RTL radio.

"What does this have to do with us?" the brother's wife told AFP in tears. "We haven't spoken to him in years. I hope we'll be left alone. We have a quiet little life, and this is starting to worry me."