The satirical magazine Charlie Hebdo on Tuesday published a cover with caricatures of the incoming French president and his wife. On social media, many slammed the magazine's cover as "sexist" and "ageist." 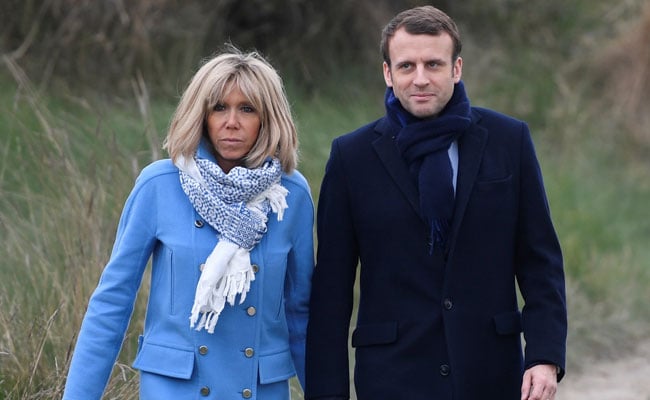 Emmanuel Macron with his wife Brigitte in the town of Le Touquet in northern France. (AFP)

It's been a week since 39-year-old political outsider Emmanuel Macron won the French presidential election.

But his wife, 64-year-old Brigitte Macron, has continued to face a litany of misogynistic comments similar to ones that plagued her throughout the campaign, most centering on the couple's 24-year age difference.

The satirical magazine Charlie Hebdo on Tuesday published a cover with caricatures of the incoming French president and his wife, along with the caption: "He is going to work miracles!"

The text was a reference to Macron's optimistic campaign messaging in a divisive election. But given the illustration - of the president-elect placing his hand on his "pregnant" wife's belly - it also was a clear jab at the incoming first couple's age gap.

On social media, many slammed the magazine's cover as "sexist" and "ageist."

Macron herself responded to the cover, tweeting: "All that is technically possible is not necessarily desirable or desired."

She added the hashtag #JeSuisCharlie, a slogan that became popular after al-Qaida terrorists ambushed and killed 12 people at Charlie Hebdo's Paris offices in 2015.

Macron was praised for her tongue-in-cheek response.

"Bravo for your sense of humor!" one Twitter user replied.

By now, the backstory of how Emmanuel Macron and his wife got together is well known in France and elsewhere: He was 15 when they met; she was his high school drama teacher. At the time, she was married with three children.

Two years later, he reportedly declared his love for her. Despite the age difference and the societal conventions, she eventually left her husband for him. "Love took everything in its path and led me to divorce. It was impossible to resist him," Macron told Paris Match magazine last year, according to the New York Times. She divorced her husband in 2006 and married Macron in 2007.

Their romance captured tabloid headlines during the French presidential campaign, but was not an obstacle to Emmanuel Macron decisively winning over far-right opponent Marine Le Pen last week.

For many French female voters, at least, the age difference was a non-issue, The Washington Post's Mary Jordan reported.

"It's normal to see men with younger women," Martine Bergossi, a shop owner in Paris, told Jordan before the election. "So it's rather great to see the opposite."

Macron's win hasn't stopped some from attacking his wife on social media, calling her a "pedophile," among other insults. Those attacks, as well as the Charlie Hebdo cover, prompted many to stand up for Madame Macron - including her daughter from her first marriage, 32-year-old Tiphaine Auziere, who said it was "jealousy" that was fueling such hate toward her mother.

"I think we cannot remain indifferent to this, and now I do not want to give any importance to people who convey this kind of stuff, because I find it totally outrageous in France in the 21st century to make such attacks," Auziere told French CNN affiliate BFM TV. "These are attacks that we wouldn't direct at male politicians or at a man who would accompany a female politician. So I think there's a lot of jealousy, and that this is very inappropriate."

Even those who were not fans of the president-elect rushed to his wife's defense.

French television presenter Cecile de Menibus tweeted that she found the incoming first lady "much more elegant than all those critics that I read... and anyway, what's the point!?"

Valerie Pecresse, the Republican president of the Ile-de-France regional council, tweeted that Macron was the victim of sexist and misogynistic comments.

In this case, it's simply that the woman happens to be older than the man. Case in point: The 24-year age difference between the Macrons is the same as the one between President Donald Trump and his wife, Melania, but the latter hasn't invited as much scrutiny.

The future French leader, for one, seems tired of talking about it.

Promoted
Listen to the latest songs, only on JioSaavn.com
"If I had been 20 years older than my wife, nobody would have thought for a single second that I couldn't be," he told the French newspaper Le Parisien this week. "It's because she is 20 years older than me that a lot of people say, 'This relationship can't be.'"