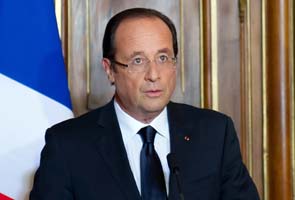 Paris: France's Socialist President Francois Hollande Sunday pledged 30 billion euros in new taxes and savings to balance the budget and fund a turnaround in two years and rejected criticism of dragging his feet.

Hollande, whose popularity ratings have taken a dive less than four months after he took office amid mounting discontent over the flagging economy and job cuts, also said a 75-percent wealth tax on incomes over one million euros ($1.28 million) would not be diluted.

"The course is the recovery of France," he said in a television interview on the TF1 channel.

"I have to set the course and the rhythm" to combat "high joblessness, falling competitiveness and serious deficits," he said. "My mission is a recovery plan and the timeframe is two years."

"The government has not lost time," he added. "It has reacted swiftly."

Hollande -- who has famously said he does not "like the rich" -- said 10 billion dollars would come from additional taxes on households "especially the well-heeled", 10 billion more from businesses and 10 billion from savings in government spending.

It would be the biggest hike in three decades.

He also vowed to curb unemployment, currently pegged at over three million, in a year's time.

Amid a decline in his popularity, Hollande has had the onerous task of preparing a 2013 budget that must save more than 30 billion euros to meet European Union deficit reduction rules.

Accused by critics of procrastinating and not adequately spelling out how he will fund his tax-and-spend programme, Hollande said he could not perform miracles.

"I cannot do in four months what my predecessors could not do in five years or 10 years," he said, referring to his immediate hyperactive, right-wing predecessor, Nicolas Sarkozy, whose personal style and functioning were vastly different from Hollande, whose aim is to be a "normal" president.

"He must weigh up what it means to seek another nationality because we are proud to be French," Hollande said, adding that there would be no exceptions in a 75-percent tax on incomes above one million euros .

"One has to appeal to patriotism during this period," he said.

Arnault said on Sunday he was not becoming a tax exile, despite seeking Belgian nationality.

"I am and will remain a tax resident in France and in this regard I will, like all French people, fulfil my fiscal obligations," the world's fourth-richest man told AFP.

"Our country must count on everyone to do their bit to face a deep economic crisis amid strict budgetary constraints," Arnault said, adding that the bid for dual nationality was "linked to personal reasons" and began several months ago.

An informed source told AFP that Arnault's move, news of which was broken by Belgian daily La Libre Belgique, was linked to a "sensitive" investment project that could be eased if he acquired Belgian nationality.

Despite his sweeping election victory, Hollande's approval ratings have dropped remarkably since May.

An Ifop poll published in the Journal du Dimanche showed only 48 percent thought Hollande would fulfil his campaign pledges of which the 75 percent tax on the rich was a key plank.

Another survey conducted by BVA for Le Parisien newspaer revealed that nearly 60 percent were dissatisfied with his performance uptil now.

In an another poll by OpinionWay for the freesheet Metro due to appear on Monday, only 46 percent pronounced themselves happy with Hollande.

Promoted
Listen to the latest songs, only on JioSaavn.com
The end of France's traditional August holiday period will also see the start of a fraught season of job cuts at major companies including carmaker PSA Peugeot Citroen, whose announcement last month it was slashing 8,000 jobs shocked the country.

French unions have warned they will not take the cuts lying down and France could be set for a return to labour unrest.