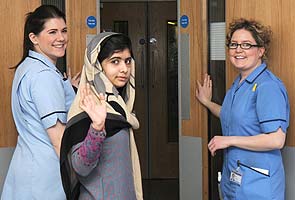 Paris: The Taliban must accept peace talks as their mission has failed, the father of Malala Yousafzai said on Wednesday, accepting a key French award for the Pakistani schoolgirl shot for campaigning for girls' education.

In an impassioned speech after accepting the Simone de Beauvoir Prize for Womens' Freedom on behalf of the 15-year-old, Ziauddin Yousafzai said his daughter was supported by the world and by God.

"She fell but Pakistan stood up. And the whole world -- north, south, east and west -- supported her," he said. "God protected her and protected the cause of humanity and education."

In an attack that shocked the world, Malala was shot in the head by a Taliban hitman as her school bus made its way through the town of Mingora in Pakistan's northwestern Swat Valley in October last year.

The bullet grazed her brain, coming within centimetres of killing her, travelling through her head and neck before lodging in her left shoulder. She was then treated in a British hospital.

Mr Yousafzai said the Taliban should now see the writing on the wall and "learn from this incident.

"They should come to talks and to peace and to humanity," he said, referring to Pakistan's population and saying that if they wanted to impose their will "they will have to kill 180 million people and that's impossible."

Mr Yousafzai's daughter first rose to prominence aged just 11 with a blog for the BBC's Urdu-language service charting her life in Swat under the Taliban, whose two-year reign of terror supposedly came to an end there with an army operation in 2009.

Promoted
Listen to the latest songs, only on JioSaavn.com
Her attempted murder has sparked calls for her to be awarded the Nobel Peace Prize.