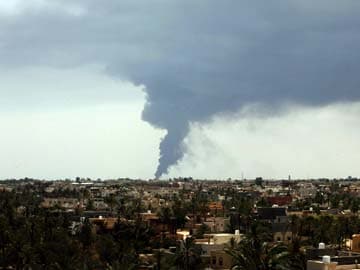 Plumes of smoke rise in the sky after a rocket hit a fuel storage tank near the airport road in Tripoli, during clashes between rival militias on July 28, 2014.

Paris: France was evacuating its nationals from Libya on Tuesday amid increasing lawlessness and unrest, a government source said, after similar moves by other European nations.

There are less than 100 French nationals in Libya and they will be taken out of the country by ship, the source said, adding that the operation would be over by the afternoon.

Several countries, including Britain, France, Germany and Egypt, at the weekend advised their nationals to leave immediately.

Promoted
Listen to the latest songs, only on JioSaavn.com
The United States for its part evacuated its embassy, citing a real risk because of fighting between troops loyal to the Libyan government and Islamists.

Other countries, including the Netherlands, Belgium, Spain and Turkey, have also advised their nationals to leave the country.

"Get Out" Of White House More: Joe Biden's Plan For 2nd Year In Office