Ada Tsim, a female bodyguard, accused of gunning down two uncles and two aunts in a park on Tuesday. 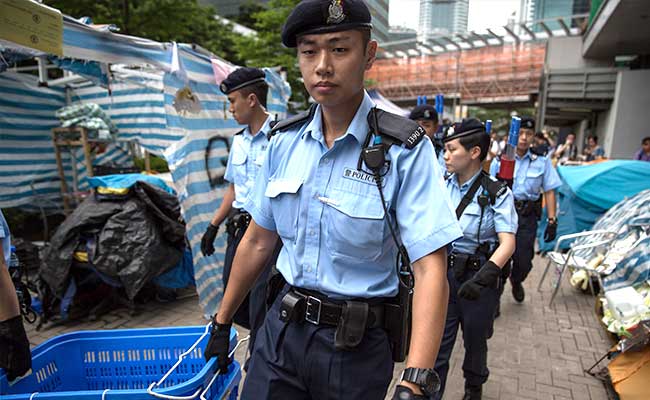 Ada Tsim is accused of gunning down 4 people in a park.

A woman was charged with murder Thursday over the fatal shooting of two elderly relatives in a brazen daylight attack in Hong Kong, a city with a reputation for safety.

The attack at Quarry Bay Park in eastern Hong Kong Island followed an alleged dispute over the sharing out of inheritance money from a HK$8 million ($1 million) apartment.

Ada Tsim, 44, who is reported to have worked as a bodyguard in mainland China, is accused of gunning down two uncles and two aunts in a park on Tuesday using a semi-automatic pistol.

Her 62-year-old uncle died in hospital Wednesday, while an 80-year-old aunt died Tuesday, hours after the attack.

Two other relatives were injured and are still in hospital.

The four victims were all siblings.

Bespectacled and dressed in a red windbreaker, Tsim appeared at Eastern Magistrates' Courts on Thursday afternoon.

Police recovered a gun with five bullets left in the chamber and a box of 41 bullets from Tsim's trousers after she was arrested in a nearby shopping mall shortly after the attack, the court heard.

There were also two knives and a cardboard cutter in her backpack.

Tsim spoke only to say she understood the charges and was remanded in custody. The case was adjourned until September 20.

Police investigators have previously said the attack was motivated by a "family conflict", while local media reported the deadly dispute was sparked by an argument over an inheritance.

Apple Daily and the South China Morning Post said a disagreement over how to share the proceeds from the sale of an apartment left by the suspect's late grandmother led to the killings.

Hong Kong's real estate is among the most expensive in the world. The Post estimated the value of the flat in question at $8 million.

Residents expressed shock over the tragedy as shootings are extremely unusual in Hong Kong, which boasts a low level of street and violent crime and strict gun ownership controls.