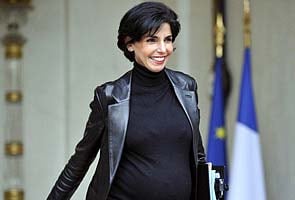 Versailles: Rachida Dati, a former French justice minister who is alleged to have had eight lovers around the time she fell pregnant in 2008, will discover next month if she has won her legal bid to have a hotel tycoon recognised as the father of her daughter.

Dati, 46, a glamorous protege of former president Nicolas Sarkozy, has issued a writ aimed at making Dominique Desseigne accept paternity of three-year-old Zohra in the latest case to cast light on the hitherto taboo sexual antics of France's political elite.

The writ was considered at a court hearing here on Tuesday and the judge will issue a ruling on December 4.

Desseigne, 68, the chairman-CEO of the upmarket Lucien Barriere casino, hotel and restaurant group, has confirmed that he had a brief fling with Dati but has refused to take a paternity test that would establish if he is the father of Zohra, who was born on January 2, 2009.

Neither Dati nor her former lover were present at Tuesday's closed-door hearing and lawyers for both parties refused to comment on their way in.

Under French law, the court cannot force Desseigne to have a paternity test but can interpret a refusal as confirming he is the father.

According to Le Monde's weekend magazine, Desseigne's lawyer intended to argue that his client could not have been the father and to highlight the fact that Dati had seven other lovers around the time of the conception.

They allegedly included a television presenter, a government minister, a company chairman, a Spanish prime minister, one of Sarkozy's brothers and a former attorney general of Qatar.

Friends of Desseigne quoted by Le Monde claimed that Dati had sent him threatening letters making it clear she would settle the case out of court in return for a pay-off.

They say he had holidayed with Dati in Mauritius over New Year at the end of 2007 but that the relationship had ended in February of 2008 with him having made it clear he did not want to have a child with her.

The Dati case has come to court just as public interest in the love life of President Francois Hollande appears to finally be waning.

Since winning the presidential election in June, Hollande has had to deal with a string of articles and books documenting the complicated history of his relationship with girlfriend Valerie Trierweiler and her alleged feud with his former partner Segolene Royal.

A book published last month claimed Trierweiler conducted an affair with a prominent rightwing politician whilst also seeing Hollande, who was then still officially with Royal, the mother of his four children.

Twice-divorced Trierweiler denies the claim and is suing the authors of the book for defamation.

Whatever the truth, the publication of such claims - which would have been unthinkable even a few years ago - has been seen as marking a sea-change in French media attitudes to the private lives of politicians.
Comments
Rachita DatiFrench minister paternity